Former Capital One® space now for rent on 14th and 3rd 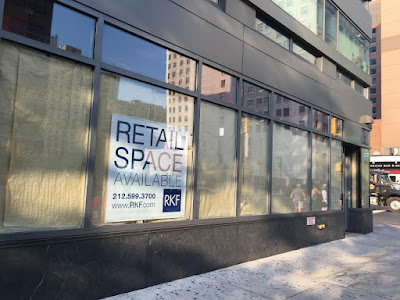 The Capital One® on the southeast corner of Third Avenue and 14th Street closed (bank branch down!) in July with the big move a few blocks to 14th Street and Broadway.

Now this prime corner space is on the rental market. The sign just went up... and the listing at RKF isn't live yet.

Will update with the rental info once it's available.

Meanwhile, what bank kind of business do you think might take this space? (We speculated that this was one possible landing spaces for the soon-to-depart M2M.)
Posted by Grieve at 4:18 AM 6 comments:

Email ThisBlogThis!Share to TwitterShare to FacebookShare to Pinterest
Labels: bank branches, Capital One, for rent, we're going to need my bank branches then

Of course the people we really want to leave just won't

From the Times today: "New York City lost less population to other states in the 12 months ending July 1, 2008, than during any year in decades, according to census figures released Thursday. If that trend continues, the city’s population will top 8.4 million in 2010."

However, these figures don't represent all the job losses that hit in the latter stages of last year. Still, we can make it a trends piece!

“This is new, a real deviation from the average,” said New York City’s chief demographer, Joseph J. Salvo. “Whether it’s a trend is another thing.”

The latest census estimate did not reflect the decline in private-sector jobs in the city late last year.

Dr. Salvo, the director of the Department of City Planning’s population division, said, “When you take a look at the conditions in the rest of the country and what has happened to the housing and economic market in a lot of places our migrants have gone to, it’s very tempting to conclude that perhaps people are staying put more because the opportunities that were afforded there are not there any longer or are no longer attractive.”

In any event! Shall we start a list of people we wish would leave the city? I'll start with the guy on the bus talking on his cellphone about the lack of good golf courses in the city.
Posted by Grieve at 7:54 AM 4 comments: