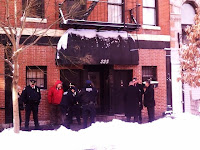 DNAinfo is reporting that a man was shot last night following a family dispute at 225 East 2nd Street between Avenue B and Avenue C.

News crews are currently on the scene. One passerby was told: "All I got was 2 shot dead on sidewalk." (Not true...)

The Post reports that the two men who were arguing are cousins. The Local East Village reports that a resident said there was a shooting at the same building last summer.

I live accross the street for there. I heard he was shot at 9 am !

People are so freaked out Arizona Congresswoman Giffords was shot, and it is awful. But it happens all around America every single day. People are even shooting their relatives in cases like this one here in the East Village. And Taz was shot in front of Forbidden City, and someone shot into the window of the building next to Northern Spy a few years back. One after another. Every shooting is a tragedy, and it's got to stop. I can't believe our country doesn't have stronger gun control laws. The rest of the world thinks we're insane, and we are.

And NYC goes back to the Future...