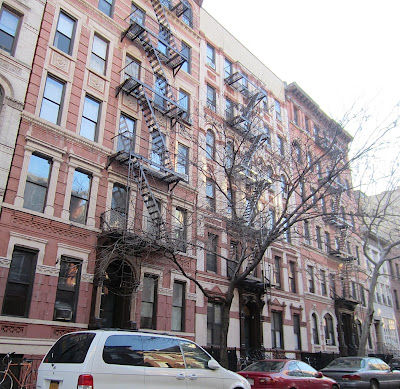 As we were first to report this past March 15, Abart Holdings LLC was ready to sell three buildings at 50, 54 and 58 East Third Street between First Avenue and Second Avenue.

Tenants with market-rate apartments weren't having their leases renewed. Per one resident in March:

"There are definitely much older families who live in the building, and suddenly they've been unceremoniously thrown out. The building is terrible as it is — several break-ins, terrible staircase, the entrance is poorly maintained — and now they are kicking everyone out."

Ben Kim at the Voice discovered that the landlord behind Abart Holdings LLC is Abe Haruvi. (The Voice wrote in October 2000 about how Haruvi allegedly tried to evict long-term tenants elsewhere in the city.)

The residents banded together and formed a tenants group; local politicians came out to offer support during a rally on May 7. 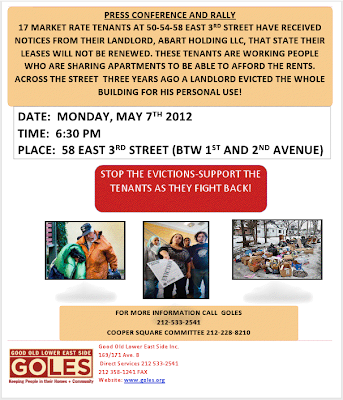 In the end, though, the Big Real Estate Machine was too great to overcome.

On Sunday, resident Sue Palchak-Essenpreis, who helped rally her fellow tenants, told us that she and her husband are moving out after 15 years. They tried to fight the non-renewal of their lease, which was up in May. On Friday, she and her husband appeared in housing court to see if they would have to pay the legal fees of Abart Holdings. She shared an email that she sent to other residents. In part, it read:

It is with heavy hearts and an empty bank account that Greg and I share the news that we are officially leaving.

We gave it the best that we had, but Abart's Goliath proved too huge for our humble David. The terms of the lawsuit were brutal and frightening, but in the end we settled. We ended up forfeiting our security deposit, which would cover one of the 2 months we were here past our lease end, and they accepted our last rent check. They did not hold us to the $3,500 per month they wanted us to pay, nor their legal fees, which was also in the suit. Their lawyer wrote into the settlement that they cannot come after us for any further damages to the apartment once we vacate. They will put a black mark on our credit that will be listed as "Settled to Satisfaction" once they prove we have truly vacated by July 14.

We are moving to Washington Heights.

I encourage any and all stabilized tenants to utilize 311 to it's fullest extent! Keep up the fight for acceptable living conditions! Hold Abe Haruvi accountable for the buildings that he is willing to destroy lives over!

We didn't go quietly. We fought the best fight that we could. And at the very least, we shed light on the fact that there is a real need for rent regulation and tenant protection...

Palchak-Essenpreis said that she received a few responses to her email, and that others in the buildings have either moved out or are in the process of doing so ... And a few of her former neighbors "paid outrageous brokers' fees, only to move into less space with giant rent increases."

"Abart wins, totally unaware of the devastation he's left in his wake," she said later in an email. "I cannot speak for the others, but we are completely destroyed... All because someone wants a couple extra hundred bucks a month off of our home."

Yesterday, residents received notices that the buildings were sold to Safeguard Realty Management Inc. is the new property manager.

And the couple, who are moving to Washington Heights tomorrow, received notice that they owe next month's rent.

Safeguard is the property manager not the new owner

Washington Heights was cheap a decade ago but it's really not that much cheape than th East Village. It is a great neighborhood, though.

You fought the good fight Sue.

Bless you and Greg.

Yep, you should be admired for trying. And you don't owe rent if you have an agreement. I recommend every tenant in NYC get a rental history from the Rent Guideline Board. 311 will get peeps there. Too many apts. are presented as market rate and are not. No one is checking. It's tenant beware. Best of luck.