The Beagle is closed for renovations

Missed this one... Several readers have pointed out that The Beagle on Avenue A is closed for renovations... been closed now for 10 days or so... 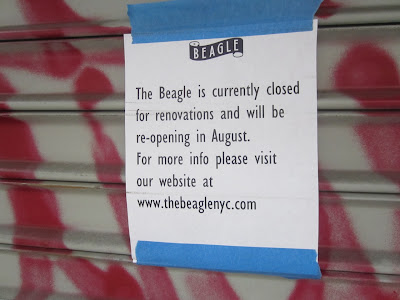 Restaurateur/Portlander Matthew Piacentini told Eater back on July 7 that The Beagle 2.0 "will have a full food menu to go along with the drinks." Also: "We're making the space more comfortable, adding some lovely banquettes, improving the sound level, repairing some floors and doors, that sort of thing."

The Beagle is expected to reopen in August.

It first opened here in the former Orologio space between 10th Street and 11th Street in May 2011. The Beagle's initial "pairing boards" included items such as Pressed Pig Head and Rum, Lamb Neck and Rye, and Scallop and Mezcal.

Never been here ourselves. Looked at the menu a few times and kept walking. Did you try it?
Posted by Grieve at 6:30 AM

Email ThisBlogThis!Share to TwitterShare to FacebookShare to Pinterest
Labels: "closed for renovations", the Beagle

I tried it for brunch, just cause it was empty around the time I walked by and was hungry. I had had a chip on my shoulder about this place, from all the foodie reviews etc, but I found it just to be a nice, normal, clean tasting meal. Nothing too cute. I was psyched to go back for dinner or something, hopefully they open back up, with a similar approach.

Im always suspicious when I hear "closed for renovations". It seems so many places never reopen. I dont get it, why not just come clean from the start? Is there a lease reason for the ruse? Have I asked this before?

I'm always suspicious of the "closed for renovations" signs too. Which is why put it in "quotes." Or at least air quotes, which is even more annoying.

Bona Fides has been "closed for renovations" now for months without a sign of a worker.

But far as I know here, The Beagle is reopening... owner seemed 100% definite in his comments at Eater.

The Beagle bait & switch on the community. Open as a restaurant, get your liquor license, close to renovate your bar.

L'Orange Bleu in SoHo was also supposedly have been closed for renovations and supposed to have opened again this Spring. Well, it turns out that it is no more (they are now in Brazil, and possibly, as EVG reported, taking over Flea Market Cafe) and the space at Broome street will be a "small Hotel Bed Breakfast and Artist Studio" due to open Spring-Summer 2013.

I don't think The Beagle will be pulling a Superdive or a Jane's Buns "closed for renovations" bait and switch here, since they already opened as the "switch". Unless they do a reverse bait and switch, and instead of serving sweetbreads they'll be serving sweet breads. Either way, it'd be sweet, as long as they open again.

At Greive and Anon. Yes, this Beagle renovations does seem to be in earnest. I dont think this one is the classic bait and switch either, but I guess time will tell when/if they reopen...

But the question remains, why do others always need to dance around the fact that they are closing for a month or two? Maybe they are trying to get a new investor or something? It just is so prevalent.

I just got back from vacation, but cornerstone cafe seemed weird/closed this am? I didnt stop to investigate though... More to come as the story develops...

I remember the crazy comments from people on this blog when this place first opened up. Wasn't so bad, was it? I hope it re-opens again - the food was interesting and was worth a visit on a special occasion (it was pretty expensive). Besides - the bar dude (forget his name) who made his own tonic is super friendly and has a genuine passion for it. It is very good.

RIP Orologio... you are sorely missed.
Especially your spicy black and white pasta with shrimp.. and your wonderful staff, crowd, and overall presence in the neighborhood.

It's way too expensive, and it's a complicated way to eat. I don't like to be forced into the "pairings." I wish they'd re-do the menu and serve a wider variety of food.

Anon 11:43, I probably made one of those "crazy comments," because for vegetarians/vegans, the Beagle's menu is horrifying, not interesting. But I have no complaints otherwise.

I went once. Found it very expensive for what it was, and as LvV says, there's almost nothing for vegetarians. But the drinks were delicious and creative, and I was very smitten with the wallpaper. (Shut up, I like wallpaper.)

I miss the welcoming vibe Orologio had. This place has a more exclusive air, which I guess is the image these new establishments want to cultivate. But I miss walking by Orologio and spotting friends dinner outside or even just inside through the window and running in to say a quick hello. And the food was so good. Too bad they didn't stay or re-open in another location.