So, we did that post back in February titled "How long before this pigeon decomposes?" 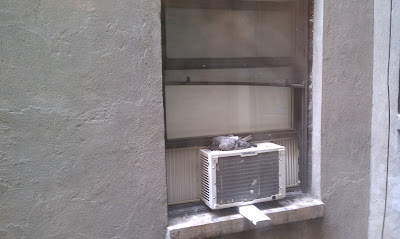 Well, Suz on Sixth, who took the photo, has an update for us.

I thought that you may be interested to know that the dead pigeon is a) still dead, b) still outside of my window, and c) not at all pleased with the soaring temperatures — its feathers are all a-jumble! Of course, that could also be due to the exploding bacterial colony where its gut used to be and the oddly curious pigeon bretheren that visit, and preen, on occasion. But, I digress. 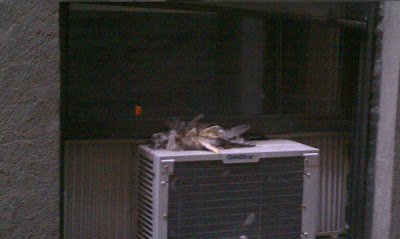 Efforts have been made to get the tenant across the shaftway to do something about the poor dead bird. But the tenant does nothing.

So how long before this pigeon decomposes?

Said tourist back in February: "Before full decomposition you will have three more Subway sandwich shops in your neighborhood."

Email ThisBlogThis!Share to TwitterShare to FacebookShare to Pinterest
Labels: life in the East Village, pigeons

Damn. I was hoping he was just sleeping.

Oh em gee, that is so gross.

How about getting a long 2x4 and in the dead of night so no one sees, shimmy it out the window and scrape the bird off? If the board can reach across the shaftway that is.

Wife & i watched a squirrel decompose on the el subway tracks outside Yankee stadium. Took 3 years for it totally disappear, bones and all.

Is that Betsey Johnson?™

Efforts have been made to get the tenant across the shaftway to do something about the poor dead bird. But the tenant does nothing.

To counteract critics, the neighbor across the shaftway is planning a weekly naming ceremony to imbue the deceased pigeon with personality and Sunday blessings involving religious figures from all faiths, including Tibetan monks and pagan worshipers.

Can we call it The Phoenix? There's a good chance that this will come back to life before the bar on 13th does.

Damn. I love the pigeons that stop on my air conditioner.