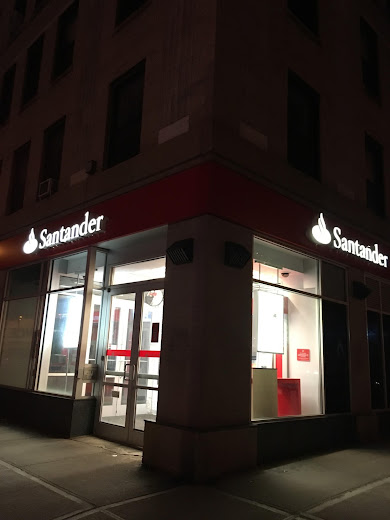 An EVG reader writes in: "Ugh! My bank is closing. Santander is still in business but the local branch at Avenue A and Fourth Street is closing in April. Letters set to go out to customers this week or next."

And here is part of the letter, which notes the branch closes at noon on April 27: 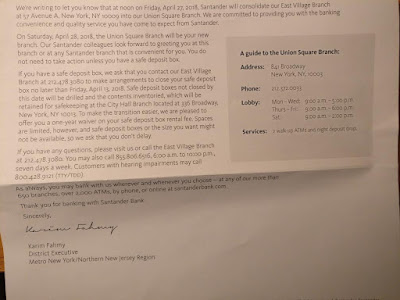 After April 27, Avenue A will be bank-branch free for the time being. The Chase branch closed at Second Street in November 2015 ... while the Citi shut down between Third Street and Fourth Street last January.

The Boston-based Santander Bank announced last week that it was raising its minimum wage for employees to $15 per hour.
Posted by Grieve at 4:20 AM

Bring back the Peruvian Chicken place!

So is the neighborhood being red-lined again, not because of poverty this time, but because of an overflow of people who do their banking online rather than in brick and mortar joints?

Although I always thought Santander was an unusual choice for Avenue A.

I see this as good news... banks over run a lot of neighborhoods in Manhattan, not because the community needs them, but because they serve as giant billboards. I don't want to see a bank on every corner of the EV. See ya later Santander!

I heard someone freaking out about their bank closing yesterday so I guess this is what they were yelling about.

Maybe they should have tried a kickstarter

Not even sure where this bank came from out of the blue? And who cares if a bank closes?

$5 to open an account, $5 a year (fine by me as the money is invested in the community.)

They mention a "minimum $75 deposit to avoid a $3 monthly maintenance fee" but I'm guessing they mean you have to deposit $75 after paying the $5 opening fee so $80 total to start an account and don't go under $25?

Whoops - up to 8 tranactions a month then $1 per transaction thereafter with the Co-op ATM network. That's too many tranactions for me so I'd never hit the ninth transaction, personally.

That is to say: any McDonalds—for free—and now any Citibank. That's like everywhere. (Feel the love!)

Not just McDonald's and Citibank. Other locations and all other credit unions, too : )

Thanks for the info 4:59pm. The Affordable Checking plan is the best one (no minimum deposit required or monthly maintenance fee.)

Key Bank has a "Hassle-Free Checking Account" with no monthly maintenance fee or paper checks you can open with a minimum $10 deposit.

There's only one NYC location at 11 E.22nd St. right off Broadway and a block below Madison Square Park (cool address and nice area) but Key has ATMs at Rite Aids all over New York city and state.

Anyone remember the Chemical Bank branch that used to operate on 14th St. between Aves. A and B in the late 70s-early 80s? They were right near a fantastic old bagel and bialy shop that lived closer to B, I'd frequently pair a bank run with a bulka run!

Actually, that Citi was originally European American Bank; the few branches of that bank—I seem to recall one on Broadway at Howard street, in an unusual cylindrical building—were eventually swallowed up by The $hitty One.