Concern for Dojo, which has now been closed for 2 weeks 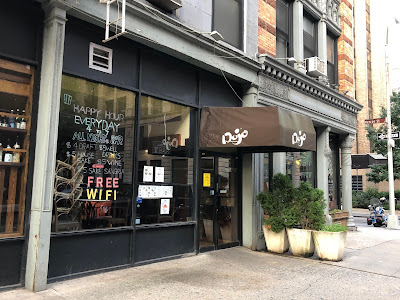 Dojo Restaurant on West Fourth Street at Mercer has been closed since a visit by the Department of Health on Sept. 13... 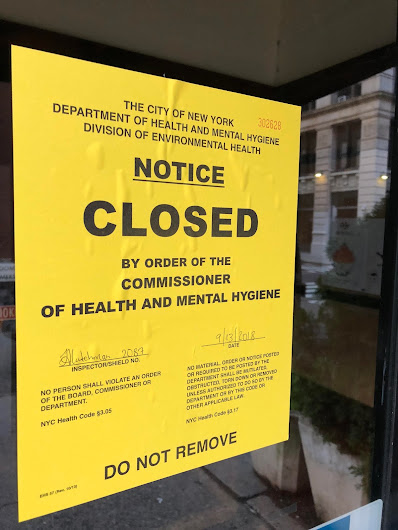 The DOH closure notice has remained in full view on the front door without any accompanying note. There's no mention of a closure on Dojo's website or social media.

And now few regulars are starting to worry that Dojo won't be coming back at all. (An email to Dojo was not returned; the phone goes to a message about a Time Warner Cable phone customer that hasn't set up a voice mailbox.)

According to the DOH website, Dojo's received 62 violation points during the visit on Sept. 13, including for:

1) Hot food item not held at or above 140º F.
2) Cold food item held above 41º F (smoked fish and reduced oxygen packaged foods above 38 ºF) except during necessary preparation.
3) Raw, cooked or prepared food is adulterated, contaminated, cross-contaminated, or not discarded in accordance with HACCP plan.
4) Food contact surface not properly washed, rinsed and sanitized after each use and following any activity when contamination may have occurred.

So the Dojo faithful remain hopeful that ownership just hasn't thrown in the towel. (In May 2013 there were reports that Dojo was shutting down due to a rent hike.)

Dojo, of course, got its start in the East Village... beginning with the Ice Cream Connection on St. Mark's Place between Second Avenue and Third Avenue in March 1970. Dojo's Japanese-inspired vegetarian cuisine came along in 1974. And via the Dojo website:

Oh, no! That soy burger is EVERYTHING!

Honestly, if it walks and talks like a duck, its a duck. Sadly, this is the end for this business. The writing is on the wall. This space will probably be made into an overpriced bakery or a poke spot. Gotta love NYC.

I used to eat here in the 90s. If the health reports are accurate and they were being that shoddy with their food they should probably close anyway.

This is sad news. Between the old St. Marks location and West 4th Street have eaten here hundreds of times, and never got sick. The food was always fresh, unlike so many Greek diners that give you reheated food that’s been sitting around all day, and where I have gotten sick many times. This location was much cleaner than the original, especially the bathrooms. I can still see the grafitti on the closet sized bathroom walls on St. Marks Place. Someone should open a soy burger restaurant with carrot dressing if Dojo doesn't come back, its one of the best meals around.

Again, some people commenting with broad suppositions and little or no proof. A closure is a closure from the Health Department. I've been eating at Greek diners my entire life and can't remember ever getting sick. Don't whine when the you don't like something.