The East River Park Track appears to be back in action 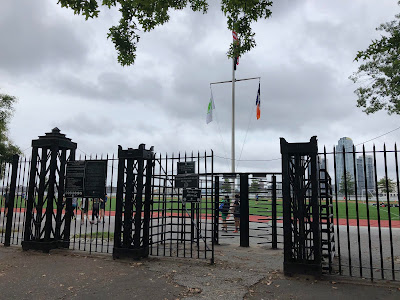 An EVG reader noted that the East River Park Track was open for business yesterday... mostly students were using the new upgraded facilitates ... 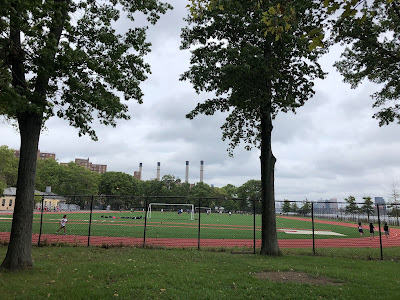 The front gates were unlocked. The reader was unsure if the track was open to anyone or just the students. (It appeared to be some kind of organized practice or event, the reader thought.) Updated: the track is open for anyone to use.

Anyway, as previously reported, the Parks Department closed the East River Park Track at the FDR and Sixth Street — without any advance notice — for a year-long renovation project last September.

In late August, a Parks rep said that the track would return for use on Sept. 10, though it remained locked up last week. The Parks Department website shows that the work here is now "100% complete."

The $2.8 million initiative was set to "reconstruct the synthetic turf soccer field and resurface the running track," per the Parks Department website, which includes this rendering highlighting all the improvements... 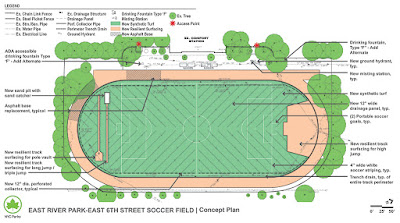 Previously on EV Grieve:
The East River Park Track is now closed for renovations; September 2018 reopening expected
Posted by Grieve at 4:20 AM

We'll see if this renovation is truly open to the public, or has become further privatized with only permit games allowed.

Of course it's open to the public. I can't wait to use it again.

A friend of mine ran on it yesterday, not a student. He said it was open and a parks employee/official asked him to use it for his run so people would see it was open to the public.

Yup -it's fully open to the public - I ran on it yesterday. They finally fixed the drainage problems as well as evened out some bumps. It's great!