The Associated has closed on 14th Street 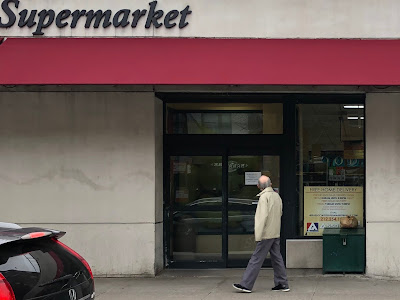 The Associated Supermarket on 14th Street in Stuy Town is now closed. According to several readers, the grocery shut down after the business day this past Thursday here between Avenue A and First Avenue.

EVG correspondent Steven stopped by on Friday morning and found the store shuttered ... there were no signs to note a closure... people figured it out on their own, though... 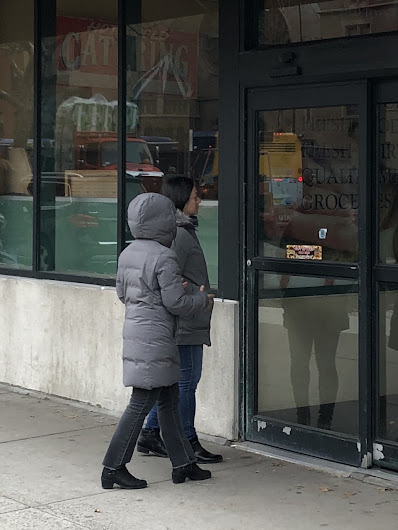 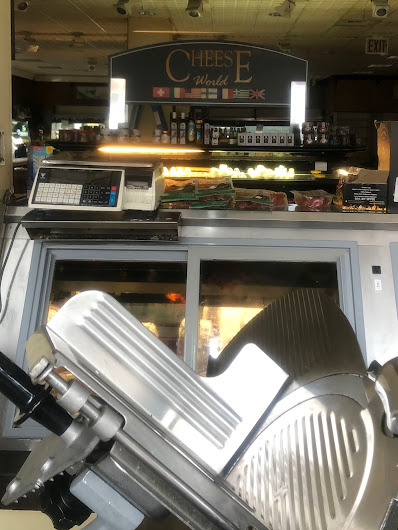 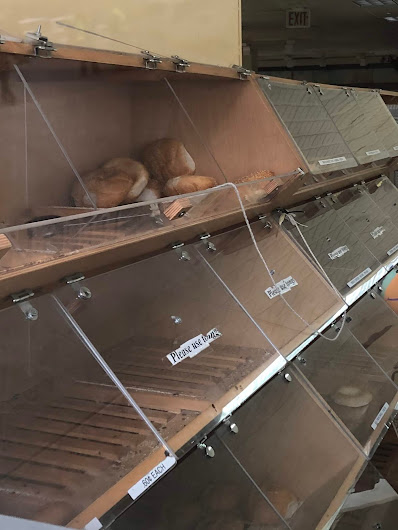 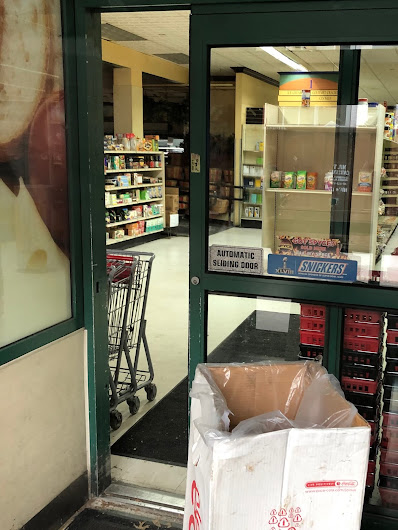 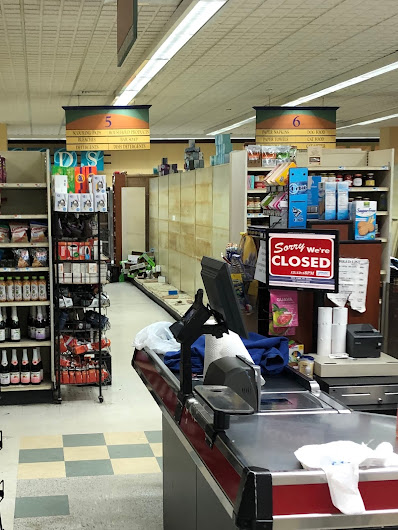 News of this closure first surfaced in September. The final day was expected to be somewhere at the end of November or early December, per Town & Village.

The closing date continued to change over the course of the past week. Employees told customers different dates, including Dec. 9 and Dec. 10.

On Saturday morning, workers were spotted removing items from the market... 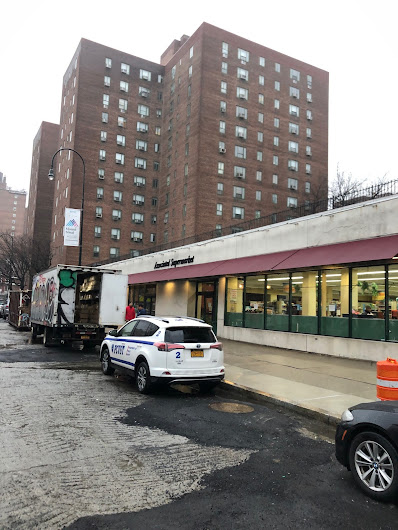 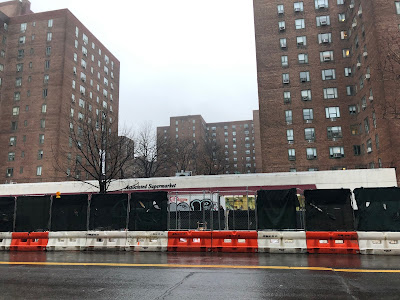 [Obscured view of the former Associated from Saturday]

If the Associated remained open, then they'd have faced competition from the Trader Joe' opening soon across 14th Street. The TJ signage arrived last week... 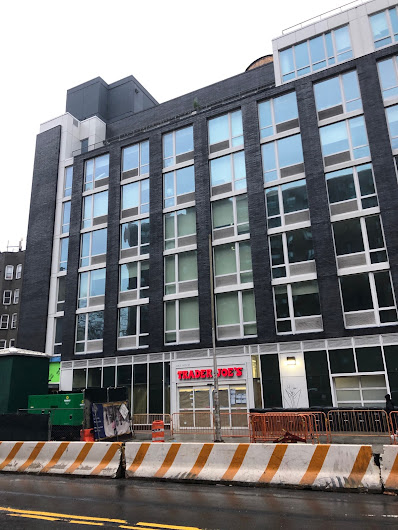 In an email in September, Stuyvesant Town General Manager Rick Hayduk told residents that they are "working on finding a new tenant with full understanding that a local grocery store is important to the community; but this will take some time."

Previously on EV Grieve:
The Associated on 14th Street in Stuy Town is said to close by year's end
Posted by Grieve at 4:31 AM

I passed by there this weekend and noticed there were no big signs thanking their customers and explaining the closure, just a small printout directing people to the Avenue C store and an interior that looked like it had been looted. Anyway, I’m sure that Trader Bros is licking its chops right now, but if you really want cheap groceries, drive to New Jersey or Pennsylvania or upstate to Rhinebeck, where you don't have to pay 25-50% more per item in order for the grocery store to pay the rent. New Yorkers are being price gouged on their groceries much more than they will ever know.

If you want cheap groceries, drive far away. LOLOLOL.

Go to C Town on Ave C. Their produce isn't the best, but it looks like they've made good improvements, their prices are pretty good, and everyone who works there is very friendly.

A family of four could easily save thousands are of dollars a year by renting a car and driving upstate to buy groceries. The other alternative is to take an Uber to Costco in East Harlem, or ordering online from Walmart which has the cheapest groceries around. None of these options helps local stores, but at what point is it no longer worth being gouged because of high retail rents and a city that is unfriendly to retailers in general?

Agree that the suggestion of driving upstate/out of state to save a few shekels on groceries is quite insane, on several distinct levels.

Good point about thanking the customers. For a business that had such a constant presence in people’s weekly shopping, I agree there should have been a note thanking all for the support. I am not surprised though with the surly exit since majority of staff were not aware of the best practices in customer service or rules of engagement.

Time ago I wrote a Yelp review calling this place Ass-ociated. I have witnessed countless times when customers were thankful and kind and the cashiers were extremely rude. I was shocked when one cashier told a customer “I am not here to be your friend but just to take your money!”

I stopped going there when I just couldn’t take the rude behavior anymore and preferred to go to C town to get my Cafe Bustelo.

Though it is sad there is no nearby option to allow elderly to phone in orders, I hope another one will fill the void soon.

I spoke to Joe Falzon in 2017, he told me then Blackstone wouldn't give them a new lease. If that is still the case (probably) the Small Business Jobs Survival Act would have saved them. You can read then Council Member Corey Johnson's role in suppressing the SBJSA then, and just look around at all the vacant storefronts everywhere that shows his role in suppressing the bill today, as Speaker.

@1:08pm: You clearly have NO idea how much money can be saved by doing one's grocery shopping in NJ. Depending on the size of your household, the savings can be quite substantial. We did this for years, and have friends who still do it.

Exactly. Lots of people around here don't have drivers licenses or credit cards. these are people who need to spend less on groceries. Also there are sadly way too many people in NYC who can only afford to buy groceries at the cheapest stores. Expect soup kitchens and food pantries to get even busier than they already are. People in the projects or rent stabilized apts cant afford to move. Ever. They are stuck. Maybe a large food co-op is needed to help these people. Maybe less defense spending and more food stamp money.

Now they can use the storefront to put their equipment while they're working…save time, save money.

but if you really want cheap groceries, drive to New Jersey or Pennsylvania or upstate to Rhinebeck

I haven't driven in 30 years; you really think they're gonna let me rent a car? Or are you assuming I own one?

And Trader Joe's is actually very affordable. It's owned by Aldi, which is known for low cost, no frills groceries. Associated on C is my closest store and I still walk to Shop Fair, Key Foods, Essex Market, Chinatown, and yes Trader Joe's because they all are more affordable with higher quality than Associated. Still, sympathies for the elderly in Stuy Town.

@ScubaDiva. Well if you don’t drive there is always CitiBike, but you might want to wait for them to bring back the electric pedal assist bikes before you set out on a grocery run to Poughkeepsie.

The technofetishists will get rid of grocery stores too - who needs them, we can order online!

Your future is sitting in a sealed room waiting for the next round of mandated vaccines and food drop offs.

Brighton Beach produce and grocery stores, no need to get out of town.