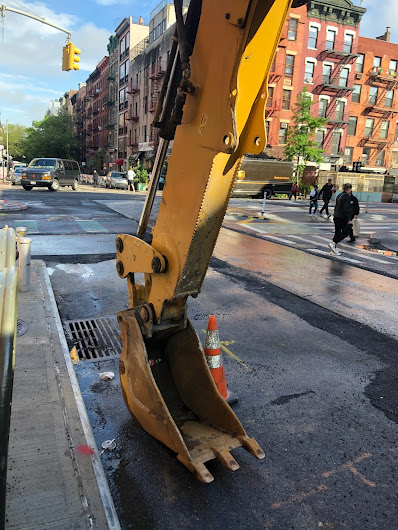 Workers from the Department of Environmental Protection (DEP) are back at the intersection of Seventh Street and First Avenue to replace portions of the water main... 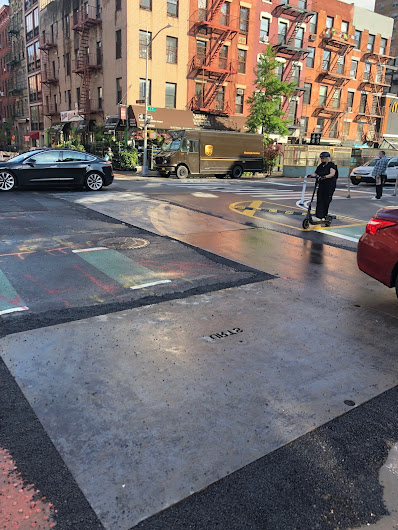 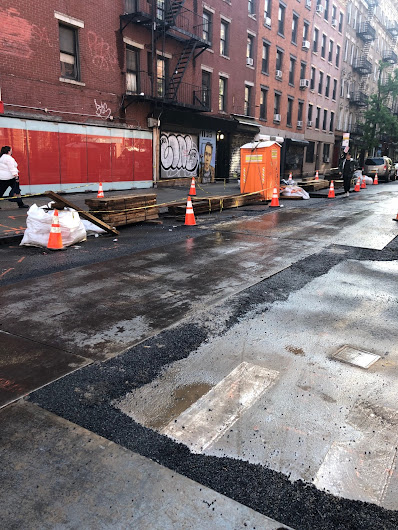 As you may recall, there were back-to-back breaks here in late December ... the ruptures sent water rushing into businesses and residences along Seventh Street.
It took a while for these more substantial repairs. The "fucked-up street surface," as one nearby resident called it, has been a topic of frustration in conversations on the East Village Neighbors Facebook group (and in the EVG inbox) this late winter and early spring.
In the weeks/months after the breaks, there was a patchwork of quick fixes on the wonky-looking intersection... 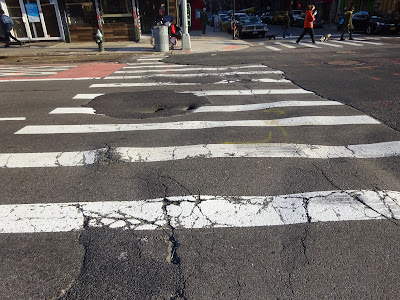 Said one resident: "Basically, the second water main break warped the avenue ... They come out to jackhammer constantly, make a hole, fill it with dirt, and then it caves in. "
Then another sinkhole would form.
And after residents file a complaint: "They come, throw some asphalt onto a sunken hole, leave and nothing is fixed." 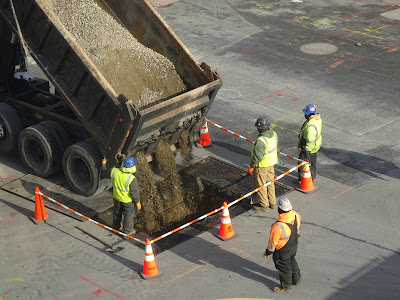 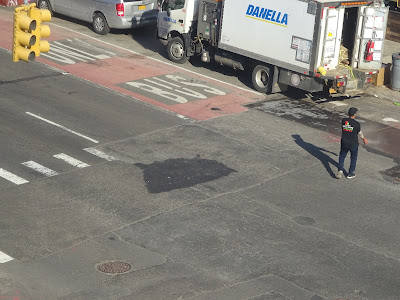 The DEP contractors then started covering the holes with metal plates instead ... and the sound of cars, trucks and buses driving over the plates overnight has disrupted the sleep of some residents living nearby.
Said the previously quoted resident: "The trucks wake me up at 2, 3, 4, 5, 6 a.m. and I've started getting migraines, which I've never had."
Hopefully, the repairs that started this week will prevent any future breaks and stabilize the roadway — and put an end to the various headaches.
Posted by Grieve at 7:30 AM

More annoying, the water has tasted terrible on and off since these mains breaks. NYC water is usually great.

Heart goes out to people impacted Those metal plates and the horrible clanking noise and rumble they cause can give one a case of PTSD after only a couple days of exposure,

often i ponder on why it takes the city 4-6 tries to repair the roads ( or anything) properly the first time is beyond me. what's the old saying first time is an accident second time is a mistake third time you're fired

I live around the corner..noise in general in the neighborhood is at an all time high. Trucks unloading in the middle of the night, car alarms, incessant honking. Been loud for generations, but with the activity returning it's getting worse.