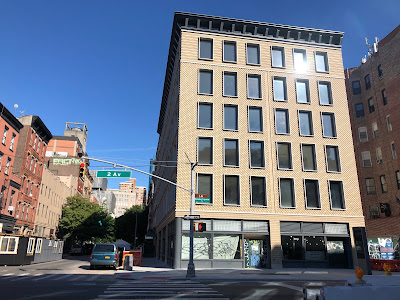 Workers finished putting in the new sidewalk around 45 E. Seventh St., offering a full look at the 21-unit condoplex with retail space here on Second Avenue.
As reported previously, the building sits on two of the three lots destroyed during the deadly gas explosion here on March 26, 2015. 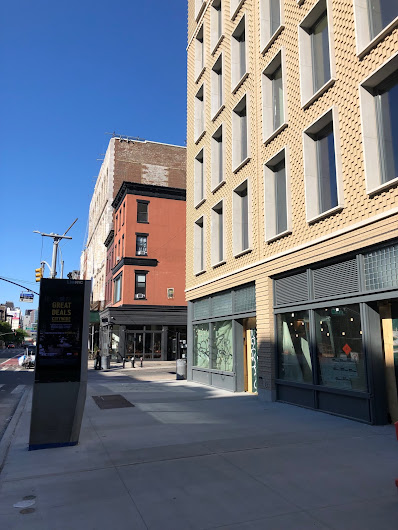 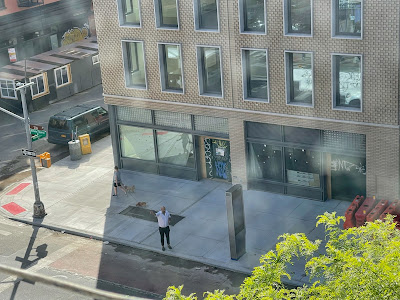 ... and bonus video footage...
The return of a sidewalk and departure of the sidewalk bridge is good news for the nearby residents who had grown tired of the scene on this intersection in warmer-weather months. In recent years, this corner has been a gathering spot in the summer-fall for travelers/crusties. (The outside of the currently closed Orpheum Theatre across Second Avenue remains a spot for an encampment.)
Meanwhile, sales commenced last summer for the units in the Morris Adjmi-designed building at 45 E. Seventh St. Prices range from $1.35 million for a one-bedroomer and $1.995 million to $4 million for two and three bedrooms ... with the penthouse asking more than $8 million.
The property will reportedly include a commemorative plaque that honors the two men who died here during the explosion: Nicholas Figueroa and Moises Locón. (In October 2017, city officials unveiled new street blades that co-name this northwest corner of Second Avenue and Seventh Street after the two men.)
As for more history here: In the spring of 2017, Nexus Building Development Group paid $9.15 million for the empty lots at No. 119 and No. 121 that landlord Maria Hrynenko owned.In a previously recorded transaction, Ezra Wibowo paid $6 million for the adjacent property at 123 Second Ave. that was owned by a different landlord who had no role in the explosion. There isn't any development planned there for now, according to previous reports.In January 2020, Hrynenko, contractor Dilber Kukic and unlicensed plumber Jerry Ioannidis were found guilty of manslaughter, criminally negligent homicide and related offenses for their role in the blast. They were each sentenced to four to 12 years in prison. Hrynenko is out on bail as she awaits an appeal of the case.Hrynenko, who took over ownership of the buildings after her husband Michael died in 2004, and her cohorts rigged an illegal system to funnel gas from 119 Second Ave. to 121 Second Ave. to cut corners, according to prosecutors.
Previously on EV Grieve:• How displaced residents are faring after the 2nd Avenue gas explosion• Moving on — and feeling lucky — after the 2nd Avenue explosion• Updated: 2nd Ave. explosion — landlord, 3 others charged with 2nd-degree manslaughter; showed 'a blatant and callous disregard for human life'• Exclusive: 2nd Avenue explosion sites have a new owner
Posted by Grieve at 5:10 AM

Finally! Looks great. This might seem insensitive as a nearby resident, but I hope the homeless and drug addicts don't overtake this area like they usually do. Eventually when people start moving in, it could be an issue when one is paying so much in rent/mortgage for those units.

Not at all insensitive @7:15am. We should not accept the type of mess that was in front of this building and is currently in front of the theater across the street.

Sleeping on the streets should be illegal in Manhattan, or at all the 5 boroughs. These are not homeless people

They just move into 330 E 6th St with their father's wealth and destroy the neighborhood that way.

Apparently this building is seeking a rooftop bar license. You can see the area they built out on top if you stand back a ways.

I hope they call it the Bucket of Blood.

Hrynenko is out on bail, really? So she hasn’t served any time yet? Ridiculous.

I've already seen crusties set up camp right outside one of the two expected retail entrances. They had to move when the workers returned to the ongoing construction inside.

Re: rooftop bar -- seriously? Is the filing available online?

Unless there is a separate elevator for guests there is no way a public bar would be allowed.

Always great when they finish up construction! so Yay for that. Sleeping rough is no fun like at all and the majority of people doing that are in fact homeless. a bit of compassion and proper city engagement (trained social workers and medical personal) goes a long way to prevent the kinda mess that was on that corner and other areas of the nabe,

a roof top bar?? NO NO NO bad idea in this area anyone it's like the community board never heard of sound waves and the audio bounce LES not built for thump from roof tops or anywhere for that matter vote NO on rooftop shenanigans!

The problem is not the City Services. The City spends hundreds of millions of dollars on these programs. The problem, in large part, is the homeless, drug addicts, and mentally ill themselves. Many of these people, if not most, WILL NOT participate in their own treatment and rehab. The City can't pull people off the street and put them in treatment centers. The City can't make mentally ill people take their meds. The City can't force people to get a job. More money does not solve the problem. If that were so countless millionaire rock stars, actors, and celebrities would be alive today.