There are 8 million stories in the naked city... and this is one of them on 2nd Avenue 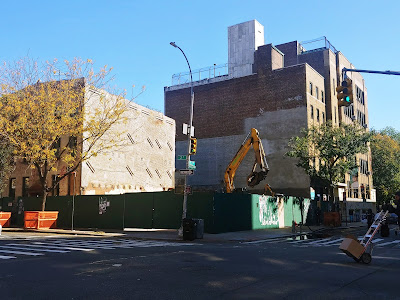 Text and photos courtesy of Felton Davis (top photo via Goggla)
I was standing on Second Avenue and Second Street watching workers demolish the corner building, part of LaSalle Academy since the 1960s. A couple stopped near me who used to live in the neighborhood. 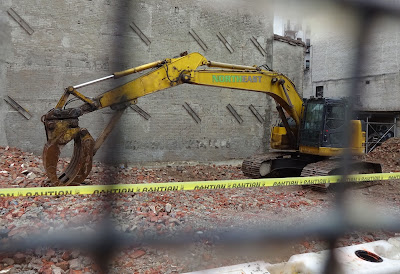 Boldly interrupting their reminiscence, I explained that before the building was part of LaSalle, it was a famous Jewish restaurant called Moskowitz & Lupowitz for many decades. It was also featured in one of my favorite episodes of the classic TV series, "Naked City." 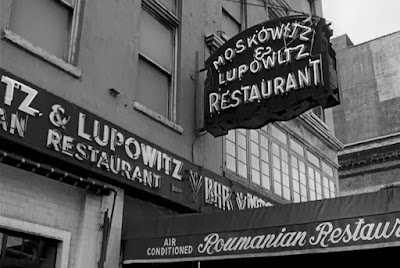 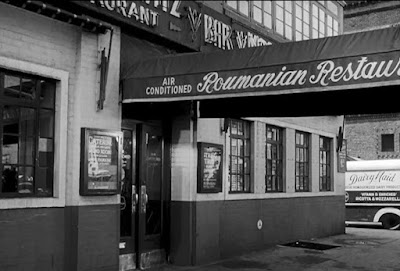 In the episode, titled "Memory of a Red Trolley Car," a chemistry professor, played by Barry Morse, accidentally breathes in a fatal amount of poison gas. With only a few days to live, he goes to talk with his mother (Gladys Cooper),  his ex-wife (Beatrice Straight), and his girlfriend on the side (Peg Murray).
The latter he meets in Moskowitz & Lupowitz, and he does not do well in communicating his plight to her. When he starts coughing, she covers her face and tells him to go away. 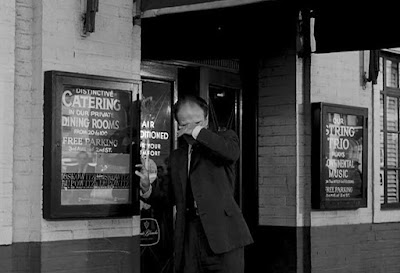 Leaving the restaurant, he turns north on Second Avenue and passes by the Church of the Nativity rectory, and the church itself, still with its Greek architecture. [Ed note: the original church was demolished and rebuilt after a fire in 1970.] 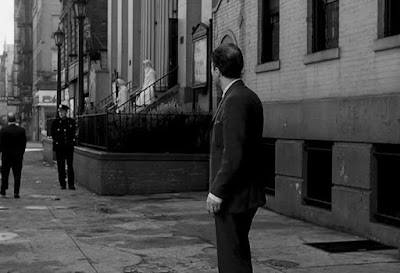 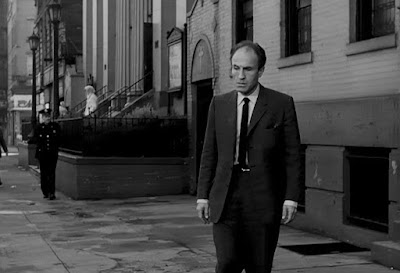 Before I could get any further into this endless recitation, the woman stopped me and asked, "What did you say that TV show was?"
When I answered, "Naked City," she was very surprised and said, "My Uncle Paul played the detective!"
So, a great history is all around us, as neighborhood tour guides know. Below is some information about Moskowitz & Lupowitz, including a video of the Pincus Sisters singing their song about the restaurant... 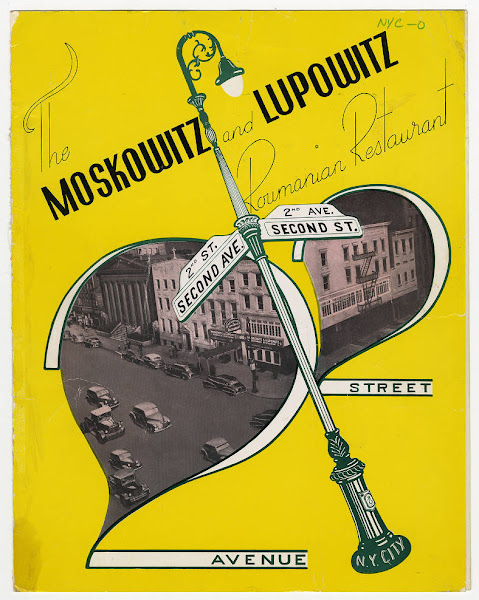 For further reading:
• Moskowitz & Lupowitz (Jeremiah's Vanishing New York)
• Plans call for 11-story condoplex at the former site of Church of the Nativity and LaSalle on 2nd Avenue (EVG)
Posted by Grieve at 6:35 AM

I love these stories and pictures of the past in our EV neighborhood. Great job! Thank you so much for writing about this.

I met up with that women, whose uncle is Paul Burke, a few minutes later in Christie park and she told me the story. Unreal! I've lived on first st for 40 years.
Now this story comes out. I feel like there's been a low buzzing sound going on all these years around me. I guess that's the sound of history. That women was also my x from decades ago.

This.
THIS is the kind of story we need right now.

Well... except for the demolition part.

Wow I’ve always know this corner to be La Salle school. Great to know a little more history of this corner. I took my drivers Ed class at La Salle back in the day.

I’m the woman you spoke with, the niece of Paul Burke!
I was with my brother, in town visiting.
I love EVGrieve and check in every day to keep up with the old neighborhood.
What a delightful surprise to read this here at home in Berlin Germany, where I now live.
I’m still pinching myself!

The buildings in this area are just going up and down, up and down. They always forget to tell me ahead of time..

Wow this predates me..I grew up in the neighborhood from the 1950's on and dont remember ever seeing this restaurant as a kid.

Why do I know that Roumanian restaurant awning? I it still there or on another, maybe Sammy's?

Great story. Moments like this are why I will always love the EV and call it “home” even though I don’t live there anymore.

Lovely story. This is why we all keep reading. Happy Thanksgiving to those who celebrate, goodness to everyone.

Pretty sure the old building was pre-60's
https://www.mannpublications.com/mannreport/2020/07/20/la-salle-academy-sells-38-second-avenue-for-14-5m/

What a classic storefront!

Love the women walking down the church steps wearing their kerchiefs !

I made my First Communion at Nativity Church and lived on First Avenue and Third Street Went to P.S.63 and JHS 64 and Stuyvesant H.S. Great Memories and Wonderful Friends and Neighbors! Serphin Ralph Maltese

Lots of the nabe on The Naked City love the show as well!

Wow! Your uncle was one of my favorite actors, and in that part he definitely was a sort of role model. I got and re-watched the entire series of Naked City a couple years back and loved every episode from the second year onward. Many of the scenes were shot on the Lower East Side in places I knew well, and the rest of the city that I miss spending time in. This story made my day.

Here is a great color photo, shot in 1942 by Charles Cushman. I alerted the archive that this is 2nd Ave and 2nd St, not 1st Ave as listed. They were aware of the mistake and said they were updating the location. There are wonderful color photos of NYC in this collection. Check it out

Another episode of Naked City available on youtube is called No More Rumbles. It shows 2nd Ave between 5th and 6th in 1958: Blocks Pharmacy, Ratners and the Commodore Movie Theater that became the Fillmore East. Very cool.

What's an easy way to see?

Oh this is such a wonderful story. And rich with links and photos. The Pincus Sisters recording was such a hoot! Thanks so much To Felton for sharing this tale, to all who have piped in with great comments here and to you EVG, for all you do that connects us. Pardon (well, don't) the resaurant-y pun: I ate it up!
Jeanne Krier