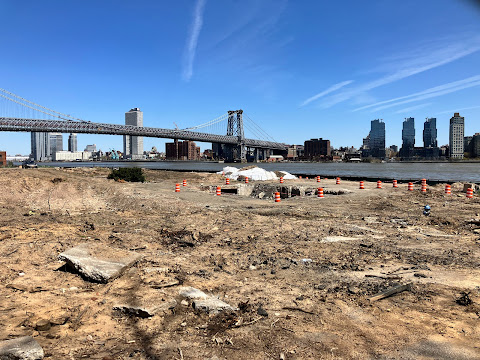 Nine months after workers demolished the East River Park amphitheater, asbestos abatement is starting this week at the site near Corlears Hook, the New York City Department of Design and Construction (DDC) announced.
The work is expected to take place for the next four to six weeks during daytime hours, according to the weekly construction bulletin. The abatement raised concern among some local residents and activists. From an Instagram post last week by 1000 People 1000 Trees:

For months the path used to access the Corlears Hook Ferry went through this area and is adjacent to the small patch of land, "passive lawn," that was set up as a replacement park which is currently open to the public.

We asked Ian Michaels, a spokesperson for the DDC, about the abatement.
"We had studied that structure and believed it to be asbestos-free. The Parks Department had also worked there in 2001 and said the same," Michaels said. "Then after the demolition of the above-ground structure, a new underground area was found. Work stopped, testing was done and asbestos was found on some pipe insulation in the new area. As a result, the job was stopped and a licensed asbestos abatement contractor has been hired to clean the site."
Michaels shared a diagram showing where the new underground area was found, in a spot behind the amphitheater. 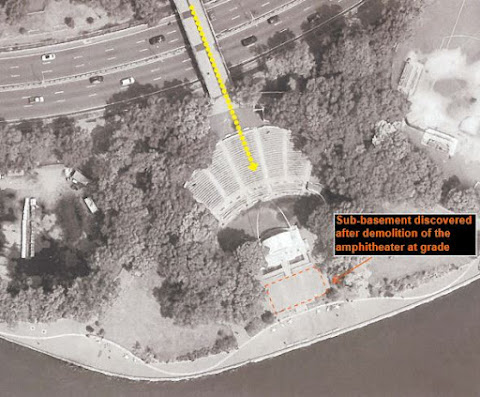 Here's more from the weekly construction bulletin about the asbestos work:

[T]he public's safety is a priority and our team will ensure abatement work will be done in accordance with all local, state, and federal guidelines, and safely contain and dispose of material. In addition to the continued use of air monitors in the work area.
The removal of materials containing asbestos will be completed by a subcontractor certified in asbestos removal, with environmental oversight performed by an independent consultant. The public may see workers in Tyvek suits as it is necessary for these individuals to wear protective gear because they will be in close proximity with the asbestos-containing materials on a daily basis.
Personal Protective Equipment (PPE) is also mandatory for their work. All asbestos materials will be isolated and contained in a fully enclosed Containment Zone, and within this zone, materials will be placed in sealed containers and trucked offsite.

Meanwhile, this past Thursday, activists gathered outside local City Councilmember Carlina Rivera's East Village office calling for her resignation — and for her to drop out of the race for New York's open 10th Congressional District seat.
To date, work on the $1.45 billion East Side Coastal Resiliency project in East River Park has focused on cutting down trees and demolishing the amenities, mostly below Stanton Street. Workers will bury the 57.5-acre land under fill and elevate it by 8-to-10 feet above sea level to protect the area from future storm surges.
The city has said they will maintain public access to a minimum of 42 percent of the park throughout construction, which is expected to be complete by the end of 2026.
Posted by Grieve at 5:09 AM

Maybe I'm a fool to post this, where I can sadly be attacked. And this post represents only my opinion. Tho I know there are many others who agree.

Again and again, (this is a HUGE example of what I'm saying, perhaps the biggest since Robert Moses), the City takes years of collaboration, research, meetings, publications, presentations, rallies, etc. of the PEOPLE and throws it in the dustbin and does whatever it damn well pleases.

The result of this approach to the waterfront/LES protection will be a mistake that doesn't even begin to show for a decade.

Can this 'project' get any worse? Lies, lies, lies from the start. Thanks, DeBlasio!

Thanks Carlina Rivera and Bill DeBlasio. Hope you're both happy with the outcome. This will be years upon years until it is complete. Perhaps in the 2030's? Why just this area of the LES was destroyed? Other parts of Manhattan weren't flooded.

I don't know how you could ever support Carlina Rivera after this betrayal. What a joke of a representative of this neighborhood.

Once again, we were sold a project that would quickly be done in a few years with very little inconvenience to us and now due to some "unforeseen circumstances" will take 10+ years to complete and go way over budget. I wish i could say we finally learned our lesson

It's not uncommon for these old structures to have pipes covered with asbestos. It was a standard building material up until the late 1970s mainly used for insulation or mixed with cement to fabricate exterior shingles. Not a safety concern to remove as long as the proper procedures are followed. As with many old structures they're hidden behind walls or buried underground and not visible on the initial inspections.

Aside from everyone predicting doom, if this is just an administrative area for the amphitheater that has some pipe insulation, the remediation should be fairly quick? These backstage areas are tiny and cramped.

Rivera fought hard to make sure that sections of the park were left open but how safe do people feel around those construction sites with potentially hazardous particulate matter blowing around?

Not uncommon for this to happen during demolition. Safety protocols are strictly enforced and the the air will be monitored continuously during the abatement process. Localized area that should not affect the larger project.

Unhealthiest "resiliency" project ever. Its rah-rah supporters only care about flood control, and not about air pollution, quality of life, access to green space, lead, asbestos, the list goes on. Or maybe they just care about political power and getting on the good side of the real estate industry so they can run and keep running for office and give away the giveaways, like our parks. The funny thing is that the politicians who supported this project didn't even pretend to care--they either went silent, pretended ESCR didn't exist, or demonized anyone who likes fresh air and trees as elitist and wealthy outsiders. A little caring would have gone a long way--keeping 42% of the park actually open instead of the joke it is now with fencing everywhere, "test pits" and many of its trees already removed; ensuring the passive lawn actually is ... a lawn instead of a dried-out wasteland surrounded by fencing (and contaminated with lead and asbestos dust no doubt); providing care and summer programming to Corlears Hook Park which instead has to beg the community for funding to show a few outdoor movies; making sure air quality monitors are working and data provided in real time; making sure tarps covered dust piles and all dust mitigation was being done; alternate bike paths and signage for those who used the greenway to commute to work or just used the greenway; noise control; and so on and so on and so on and so on. ESCR completely brutalized the community and continues to do so. It is an actively harmful project that could so easily have been done "right" if overseen and navigated by representatives who actually cared about the public good and the environment, instead of for the construction industry and the easiest/fastest way to chop down a park and pour concrete on top.

I feel bad for all those poor trees they had to cut down. Especially during one of the hottest summers we have seen in a while. Just so they could spruce up the East River Park for the real estate developers. What a tragedy.

This is why I’m moving out. This nonsense has spread to Battery Park. Southern Manhattan will be an ecological nightmare over the next few years. Hello Brooklyn where they like community, parks, and people.

Congrats Carlina Rivera, you now have a toxic wasteland as part of your record.

Why do they need to abate the asbestos if they are going to cover it all with 8-10 feet of fill? Why don't they just bury it?

I get that the dust is blowing around now but they could dump dirt on it and get going... this project is going to drag on for YEARS!!