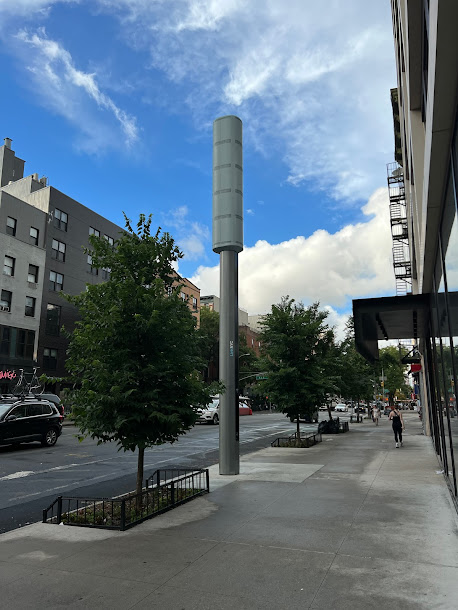 The new structures are operated as a public-private partnership by consortium CityBridge, and are a revamp of the old 10-foot kiosks the firm set up under former Mayor Bill de Blasio starting in 2015 with free Wi-Fi, USB charging ports, a tablet, a 911 button, and calling capabilities.

The old ones were supposed to be funded by digital ad displays on the side and the city originally hoped to build 10,000 of them, but the screens did not bring in the promised revenue, which brought the program to a halt with some 1,800 units built largely in Manhattan.

Read more about the supersize LinkNYC and the plans to revive the broken promise to bridge the digital divide in NYC at The City.
Currently accepting nicknames for the Link5G towers in the comments.
Posted by Grieve at 11:30 AM

I'd love to see the technical specifications surrounding this!

Nickname: ugly. They could have received great publicity and more use if they had done an interesting design. It would have been so easy to hold a competition for the best design and had something interesting. Instead more dystopian ugliness.

Correction: "...built largely in Manhattan." The LinkNYC kiosks litter the LES & East Village. There are 12+ on 2nd Ave. between 14th St. & 6th St.often on both sides of the avenue! Go to Madison or Park Aves. and see how many you can find.

How healthy is this thing ?

Hypocritical nonsense. People claim they want to improve equity, but then show their true colors by sabotaging these projects with NIMBY trolling. From the article:

"One source from a telecom giant said their company doesn’t have confidence in CityBridge’s ability to complete the rollout of Link5G, predicting that the structures will “run into a buzzsaw” when people start to see them crop up in their communities. "

The earlier business model was sabotaged via "surveillance" concern trolling.

I hope you're all proud of your vital work you're doing to improve the city.

...and this was the tree they harvested concrete from

Looks like an upside down shawarma thing without the meat on it.

Nominations are ongoing for the best related conspiracy theory. The first round winner is ... Stingray!!! {do your own research)

Second place is, of course, Bill Gates vaccine nanobot 5g control towers, and third place is they don't actually do anything, it's an internal corporate billing scam.

@ 12:28 PM
Take your red herring bullshit elsewhere. These have nothing to do with "equity". It's a pure profit exploitation of a neighborhood where profiteering exploiters can get away with anything.

I'll take a dystopian tampon-pole over the current setup - although I will miss seeing NYSee comics on them. http://grantshaffer.com/comics

I wonder how safe these things are...

I'm surprised these haven't been tagged yet. Let's just call them Tagger Totem Poles. Also can't wait to see what happens when a truck or car hits one of these 3 story tall wok handles and it crashes into someone's living room.

Agreed on both points!

Cell phones, wifi towers and microwave ovens all emit electromagnetic radiation. I measure these things with an EMFields Acoustimeter, and the LinkNYC towers (the old as well as the new tall ones) all max out the Acoustimeter within a few feet. You wouldn't stick your head into a microwave oven and turn it on, but many people hold up a cellphone to their ears hour after hour, and many people hang out next to the LinkNYC kiosks re-charging their devices. No modern conveniences are without any health or environmental consequences -- each one has a price. And it should be noted that the brains of infants and children are far more sensitive than the brains of adults with their hardened skulls. Want to take a walk around the East Village with an Acoustimeter? Send me an email at DavisFelton3@yahoo.com, and we can arrange a time.

Along with the danger from electromagnetic radiation, there are many sources of ionizing radiation (alpha, beta, and gamma) in our midst. The old Hall of Minerals in the Museum of Natural History on Central Park West, contained rock after rock with measurable levels of radiation, and I sent them the results of my tests with a RadAlert USB Inspector several years ago. I also notified our local creative tile artist, the "Mosaic Man Jim" of a few of his decorative tiles that were emitting as much as 192 counts per minute (CPM), most likely of Alpha radiation from radon gas. That's on a windless day -- with any kind of breeze the gas blows away and is not measurable. The museum went to great lengths to mitigate the radiation danger from their priceless collection of rocks and minerals, including increasing the ventilation, encasing the minerals in glass, and removing the contaminated carpet. As for Mosaic Man Jim, his response has been colorful, but unprintable.

Hopefully the same thugs who steal catalytic converters will steal these too. Anybody know what the resale value is for these?

“Do cell phone towers cause cancer?
Some people have expressed concern that living, working, or going to school near a cell phone tower might increase the risk of cancer or other health problems. At this time, there isn't a lot of evidence to support this idea. Still, more research is needed to be sure.” https://www.cancer.org/healthy/cancer-causes/radiation-exposure/cellular-phone-towers.html

As it is with the current kiosks, the moment you connect your phone for charging, it slurps all you data and sell it away. Not a conspiracy theory, just a fun fact.

Where is the hidden cameras that they said they won’t have but are found in every Linknyc kiosk?

There has been one of these at the corner of Clinton St and Grand St in the LES for a couple months now!

This is a pin drop from google maps.

God, the neighborhood is full of hidden dangers, as if I need more to worry about. If I failed to say it before, EV Grieve has the best comments section.

I was walking by the 5G tower yesterday when, all of a sudden, my body started violently vibrating and BAM! - I was drawn to the tower and stuck to it. At first I thought it was Havana Syndrome but it turns out the 5G towers are magnetically attracted to all of the microchips inside me from the you-know-whats. I used the tower's built in Alexa command and I was freed. Whew! (I still can't figure out why thousands of bees fell from the sky.)

Did you see the new season of Westworld? I’m surprised you can even see the towers.

Holy shit! The same thing happened to me! But I don’t have Alexa. Can you come and free me? I’ll buy you a bag of dope!

@ 4:41 Thank you, but I don't need dope. The Link5G tower has left me feeling like I've returned from an ayahuasca retreat or perhaps a peyote jag. I highly recommend walking by it.

Maybe someone could turn it into a giant sunflower.

i guess you mean this 12:28 ? which actually is about improving equity http://rethinklink.nyc/

Yes, I know what that is. We have them all over here in Florida. The Specs will likely show them to be capable of 20,000 - 30,000 Watts Effective Radiated Power. Some typical specs are here: https://reject5g.info/2021/03/12/an-open-letter-to-governor-desantis/