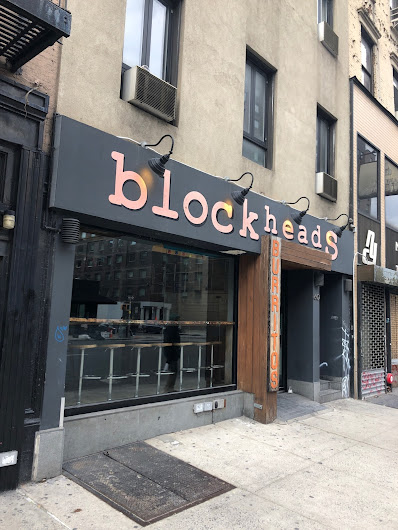 Blockheads, the San Francisco-style Mexican restaurant, closed the other day for renovations here at 60 Third Ave. between 10th Street and 11th Street. 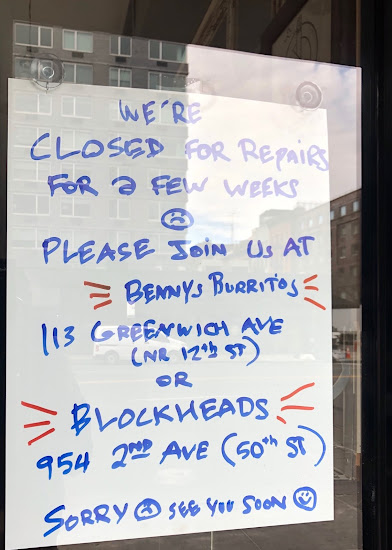 The big burrito specialists, from the folks who launched Benny's Burritos, have four locations in NYC and one in White Plains. They opened here in July 2015 ... taking over the space from — drumroll — Unidentified Flying Chickens!
Posted by Grieve at 4:01 AM No comments:

Email ThisBlogThis!Share to TwitterShare to FacebookShare to Pinterest
Labels: Blockheads, closed for renovations 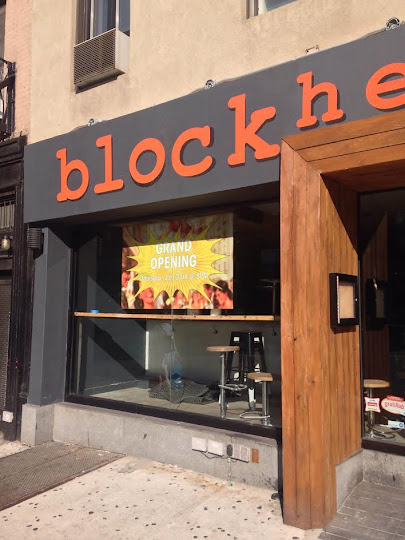 The San Francisco-style Mexican restaurant opens tomorrow at 5 p.m. in the East Village.

The big burrito specialists, from the folks who launched Bennie's, is at 60 Third Ave. between East 10th Street and East 11th Street.

Per their Facebook page, frozen margaritas at this location will be $3 for the rest of July.

This will be the seventh Blockheads in Manhattan … not to mention the Benny's in the West Village.

Previously on EV Grieve:
Blockheads bringing their San Francisco-style burritos to the East Village
Posted by Grieve at 4:20 AM 10 comments: 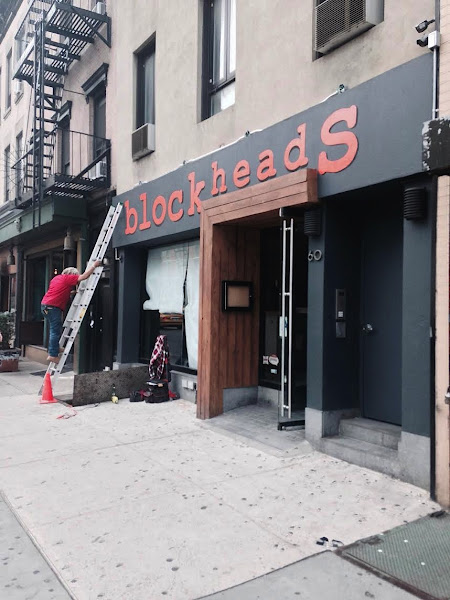 As we've been reporting, 60 Third Ave. will be home to a new location of Blockheads, the San Francisco-style Mexican restaurant from the folks who launched Benny's Burritos.

Workers painted the sign yesterday here between East 10th Street and East 11th Street. A rep for Blockheads told us they hope to be open by the end of the month, though that's not definite.

The previous tenant, an outpost of the Jackson Heights-based Unidentified Flying Chickens, closed last month after 11 months in business.
Posted by Grieve at 4:35 AM 15 comments:

That's it for Unidentified Flying Chickens on 3rd Avenue 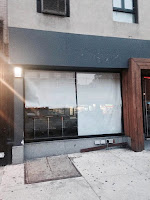 The East Village outpost of the Jackson Heights-based Korean fried chicken restaurant at 60 Third Ave. had been closed all of June for a ceiling repair, according to a note on the door.

It seemed unlikely that UFC would actually reopen, given that the address here between East 10th Street and East 11th Street will be home soon to another location of Blockheads, the San Francisco-style Mexican restaurant from the folks who launched Benny's Burritos.

To little surprise then, workers have stripped off the signage from the restaurant this week and packed up the interior. No word just yet when the Blockheads will arrive. UFC opened on Third Avenue last July… and they lasted much longer than the previous tenant. Après closed after just three weeks.
Posted by Grieve at 4:15 AM 3 comments: 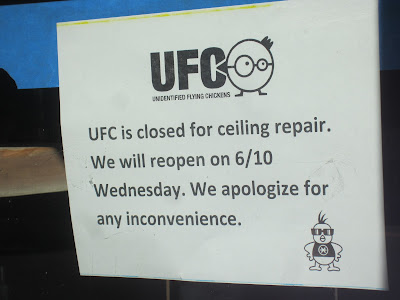 Over at 60 Third Ave. near East 11th Street, Unidentified Flying Chickens has been closed the past 10 days or so… the sign points to a ceiling repair, which appears to be happening inside… 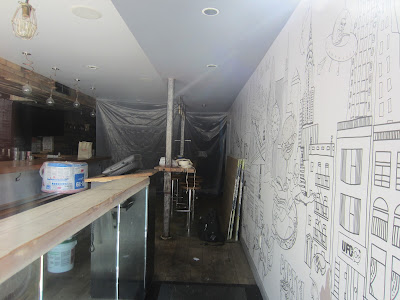 The East Village outpost of the Jackson Heights-based Korean fried chicken restaurant opened last July. However, they won't be in this space too much longer: The address will be home soon to another location of Blockheads, the San Francisco-style Mexican restaurant from the folks who launched Benny's Burritos.

Meanwhile, Spice, which only recently opened at 71 First Ave. between East Fourth Street and East Fifth Street, is out of commission for the moment… the sign says Spice is upgrading its gas lines… 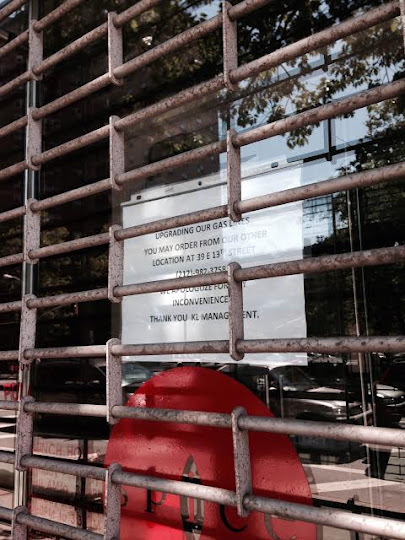 The Spice on Second Avenue and East Sixth Street is now closed… so if you want your Spice fix you'll have to get it at the East 13th Street and University Place location for now.

No. 71 here was previously home to Pukk, the 11-year-old vegetarian/vegan Thai place that closed in March.
Posted by Grieve at 4:15 AM 2 comments:

Blockheads bringing their San Francisco-style burritos to the East Village 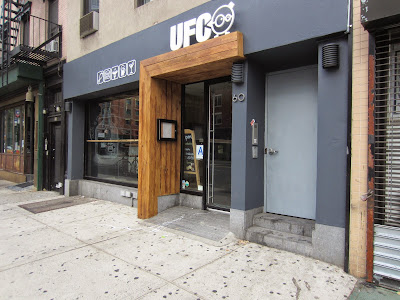 The city's seventh Blockheads is in the works to take over the Unidentified Flying Chickens space at 60 Third Ave. near East 11th Street. Aside from a full-service dining room, this location will also offer take out and delivery.

Brothers Ken and Don Sofer opened the first of the casual, San Francisco-style Mexican restaurants on Third Avenue and East 34th Street in 1993. They also own the Benny's Burritos in the West Village. (Ken Sofer helped open the East Village Benny's, but sold his stake 10 years later.)

Blockheads is on this month's CB3/SLA committee agenda for a new liquor license.

In February, the owners of Taproom 307 went before CB3 for the space, but were met with resistance.

As for UFO, they never seemed to catch on, though, as we've pointed out, the Korean fried chicken specialists made it longer than the previous tenant — the 3-week-old Après.
Posted by Grieve at 4:38 AM 10 comments: