It’s been an amazing four years. Come join us for one final toast this weekend, we will remain open through this Sunday, June 10th.

Cherche Midi, Keith McNally's French brasserie on the southwest corner of the Bowery and Houston, has officially announced — via Instagram — that it will close after service tomorrow.

Until now, it was a foregone conclusion that they'd be shutting down after four years in business. In March, Patch reported on a state filing announcing that the restaurant would be laying off its 46 employees on June 11.

A rep for Cherche Midi later confirmed a summer close to Grub Street, though didn't provide an exact date.

And as first reported in April, a listing for the space arrived at RKF... 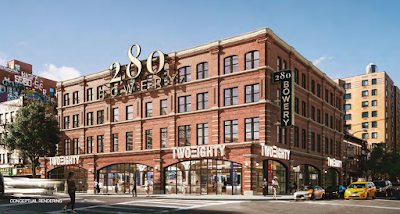 However, this listing has since been removed. (Leased?)

McNally, who also runs the Odeon, Balthazar, Minetta Tavern and Augustine in the Beekman Hotel, opened Cherche Midi in the summer of 2014 ... taking the place of his Pulino's Bar and Pizzeria, which apparently helped triple the rents of its neighbors.

In other Bowery closings, Hecho en Dumbo ends its eight-year run at 354 Bowery after service this evening.

Previously on EV Grieve:
Report: Cherche Midi looks to be closing on the Bowery

Cherche Midi space on the market for new retail development on the Bowery at East Houston
Posted by Grieve at 10:49 AM 1 comment: 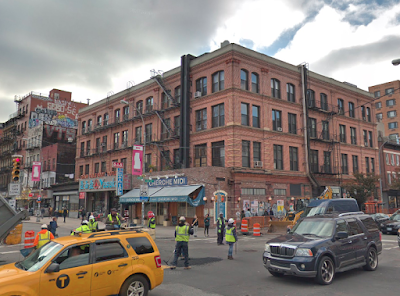 There's a new retail listing for 280-282 Bowery at East Houston.

Here are details via RKF:

• At the nexus of SoHo, NoLIta, NoHo, The East Village and Lower East Side
• Steps from four major hotels: Bowery Hotel, Public Hotel, The Ace Hotel and CitizenM
• Across from Whole Foods Market, The New Museum and the International Center for Photography
• Second Floor space can be made available
• Lower Level can be converted to selling
• An additional 1,500 SF of Lower Level space can be made available in Space B

The rent is available upon request.

And here's the rendering showing the possibilities on this southwest corner of the Bowery and Houston...

Rumors surfaced last month that McNally would be closing his four-year-old bistro. (A rep for McNally, who also runs the Odeon, Balthazar, Minetta Tavern and Augustine in the Beekman Hotel, confirmed to Grub Street that Cherche Midi will close in early June.)

This marks the second high-profile restaurant to close on the Bowery and East Houston since last August. Daniel Boulud shut down DBGB Kitchen and Bar after eight years in the Avalon Bowery complex between First Street and Houston.

If success restaurateurs like McNally and Boulud can't make these corners work... then what? An EVG reader left this comment on the previous Cherche Midi post:

My prediction for the gentrified Bowery, chain restaurants (as in Chipotle and Shake Shack, some run of the mall shops which most New Yorkers have never heard of, and all this surrounded by high end luxury condos. This is what the lack of urban planning and unleashed developer money brings.

Email ThisBlogThis!Share to TwitterShare to FacebookShare to Pinterest
Labels: 280 Bowery, Cherche Midi, for rent, the Bowery

Report: Cherche Midi looks to be closing on the Bowery 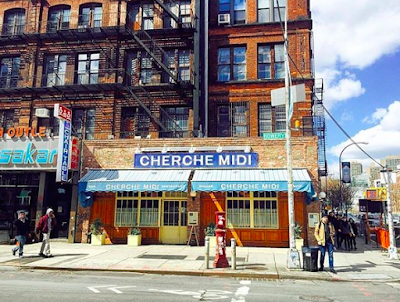 Cherche Midi, Keith McNally's French brasserie on southwest corner of the Bowery and Houston, appears to be closing this summer.

Rumors were circulating earlier last week about the impending closure. On Friday, Patch reported that the restaurant had filed paperwork with the state about the matter:

The restaurant will close on June 11, according to a notice filed with the state. Under New York law, private employers must provide written notice if their business will close, suffer a mass layoff or relocate. The notice says that Cherche Midi will lay off 46 employees because of a "plant closing." The closing date is listed as June 11 on the notice. It lists the reason for the relocation as "economic."

The restaurant has not made any official comments yet about its fate.

McNally, who also runs the Odeon, Balthazar, Minetta Tavern and Augustine in the Beekman Hotel, opened Cherche Midi in the summer of 2014.

This replaced McNally's Pulino's Bar and Pizzeria, which apparently tripled nearby rents and caused men to urinate in the co-ed sink. Pulino's opened in March 2010.

This would mark the second high-profile restaurant to close on the Bowery and East Houston since last August. Daniel Boulud shut down DBGB Kitchen and Bar after eight years in the Avalon Bowery complex between First Street and Houston.

"In this location, it’s busy on weekends but erratic in the early part of the week," Boulud told The New York Times. And per Eater: "The neighborhood is changing," he said of his decision to close the "very good restaurant."

Both restaurants opened around the time of the start of the East Houston Reconstruction project, which is now just five years behind schedule. 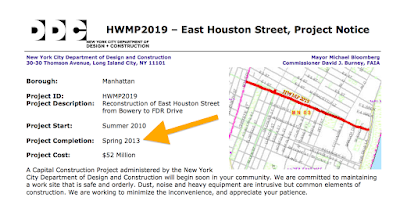 The area in front of DBGB remains torn up, as workers are apparently grappling with underground utility issues... 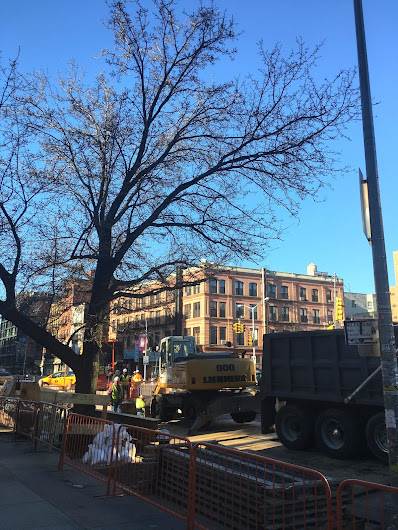 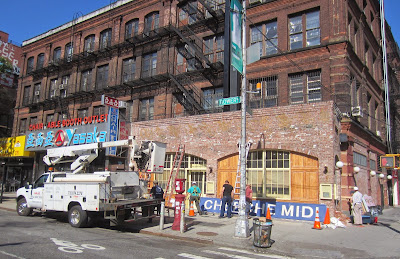 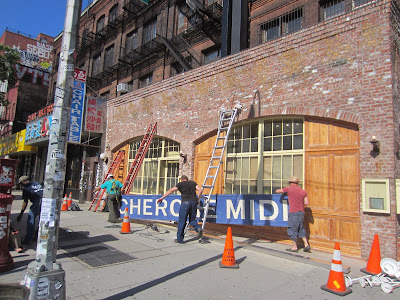 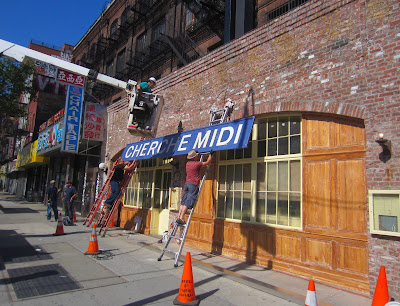 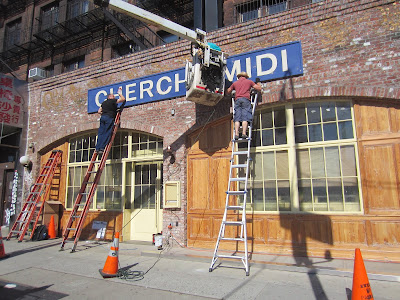 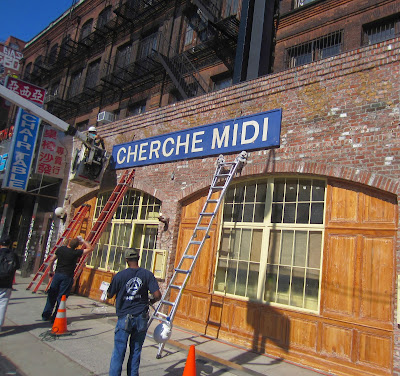 Dunno too much about Cherche Midi. Eater says they will feature French food from Shane McBride, who's currently executive chef of Balthazar. Zagat reports that they are taking reservations starting on Friday.

As for the sign, much more understated than the red beacon that was Pulino's.
Posted by Grieve at 4:50 AM 4 comments: