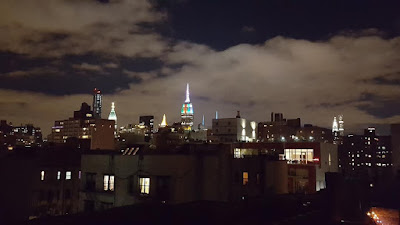 A view toward Midtown tonight via Goggla...
Posted by Grieve at 10:14 PM 1 comment: 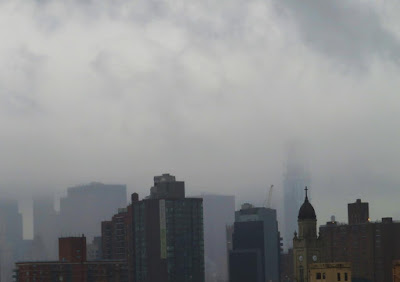 A noon-time look toward downtown via Bobby Williams...
Posted by Grieve at 12:30 PM 1 comment: 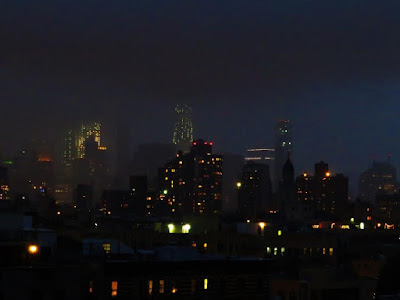 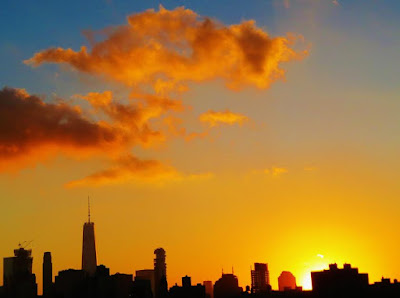 Photo by Bobby Williams
Posted by Grieve at 8:14 PM No comments: 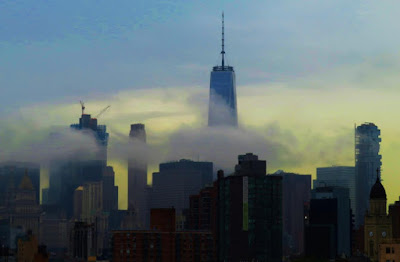 A look downtown from this morning via Bobby Williams...
Posted by Grieve at 7:57 PM No comments: 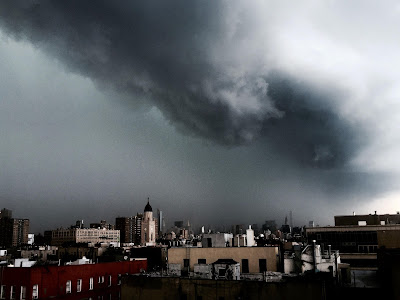 EVG reader Mike Brown shared these views as the storm clouds rolled through the Lower East Side late this afternoon... 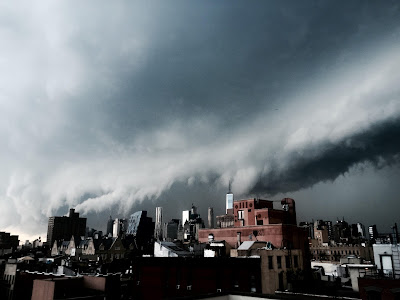 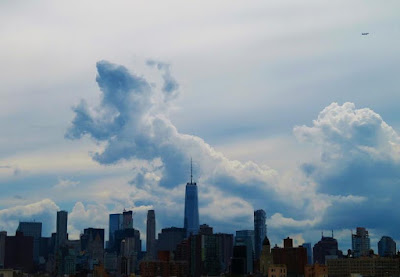 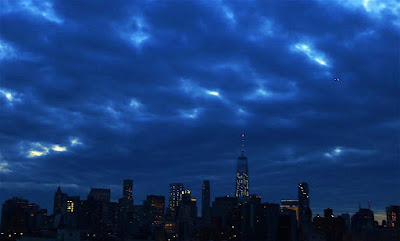 Earlier this evening via Bobby Williams....
Posted by Grieve at 7:45 PM No comments: 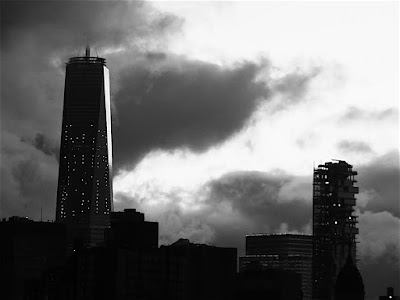 A view downtown early this evening via Bobby Williams...
Posted by Grieve at 7:41 PM 2 comments: 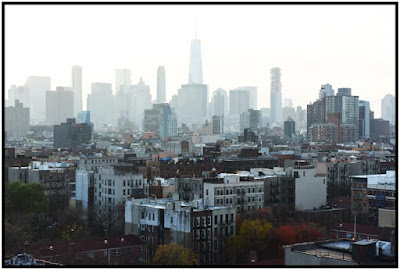 EVG reader George Cohen says that early this morning, from after midnight to the time he went to bed, "a severe air pollution smell came through my windows" in his East Village apartment.

"I was in Beijing in 2013, and the air smelled like this. At about 10 am I went out, and Avenue D, down past Houston Street was in a THICK STINKY SMOG."

He took the above photo late this afternoon, "and I still could smell polluted air."

Cohen said that he checked the air pollution stats online, which received a "good" rating on one site and "moderate" on another...

"I beg to differ. This is f----d up. This could be an example of faulty air monitoring, or it's a coverup. Not likely, but I certainly did not imagine the smell and the visuals. I wonder what's up?"

Via the Weather Channel... in ALL CAPS:

AIR QUALITY LEVELS IN OUTDOOR AIR ARE PREDICTED TO BE GREATER THAN AN AIR QUALITY INDEX VALUE OF 100 FOR FINE PARTICLES. THE AIR QUALITY INDEX... OR AQI... WAS CREATED AS AN EASY WAY TO CORRELATE LEVELS OF DIFFERENT POLLUTANTS TO ONE SCALE. THE HIGHER THE AQI VALUE, THE GREATER THE HEALTH CONCERN.

WHEN POLLUTION LEVELS ARE ELEVATED... THE NEW YORK STATE DEPARTMENT OF HEALTH RECOMMENDS THAT INDIVIDUALS CONSIDER LIMITING STRENUOUS OUTDOOR PHYSICAL ACTIVITY TO REDUCE THE RISK OF ADVERSE HEALTH EFFECTS. PEOPLE WHO MAY BE ESPECIALLY SENSITIVE TO THE EFFECTS OF ELEVATED LEVELS OF POLLUTANTS INCLUDE THE VERY YOUNG, AND THOSE WITH PRE-EXISTING RESPIRATORY PROBLEMS SUCH AS ASTHMA OR HEART DISEASE. THOSE WITH SYMPTOMS SHOULD CONSIDER CONSULTING THEIR PERSONAL PHYSICIAN.

A TOLL FREE AIR QUALITY HOTLINE HAS BEEN ESTABLISHED SO NEW YORK RESIDENTS CAN STAY INFORMED ON THE AIR QUALITY SITUATION. THE TOLL FREE NUMBER IS: 1 800 5 3 5, 1 3 4 5. 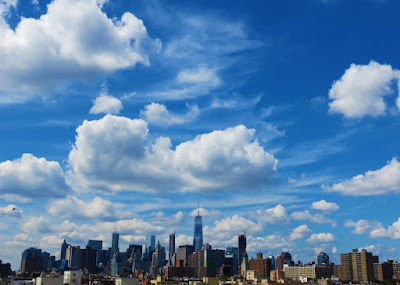 The downtown skyline this morning 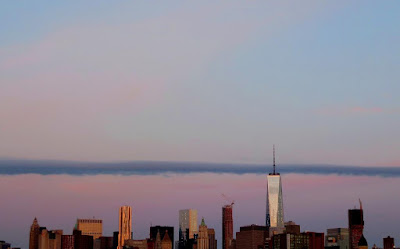 Photo by Bobby Williams
Posted by Grieve at 9:28 AM 1 comment:

After the rain... an East Village sunset view courtesy of ‏@EOSredux2 ... click on the image for a better view...
Posted by Grieve at 8:50 PM 1 comment: 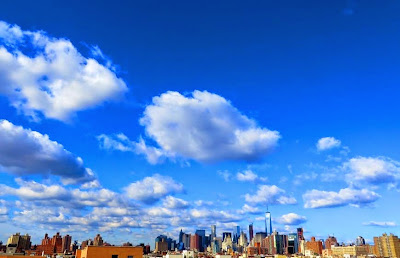 Photo this afternoon via Bobby Williams...

The Manhattan skyline like maybe you've never seen it 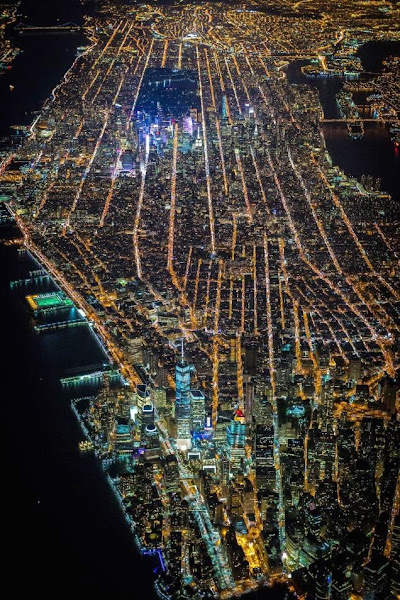 Thanks to Sploid, we now know about these amazing Manhattan skyline photos by Vincent Laforet, a director, photographer "and a pioneer in tilt-shift, aerial photography, and in HD DSLR cameras for shooting film."

Check out his photo essay here ... the results of him hanging out of a helicopter 7,500 feet above New York City on a very dark and chilly night... 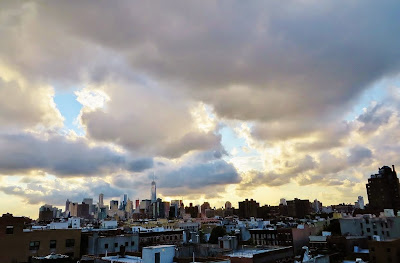 The view downtown this morning 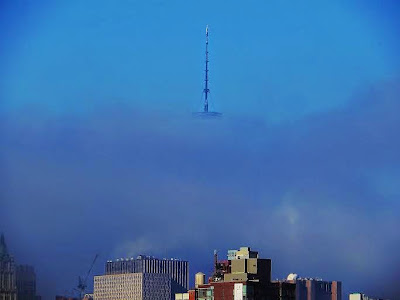 Looking south from the East Village around 9 via Bobby Williams...
Posted by Grieve at 9:22 PM 1 comment:

Starting out in the evening 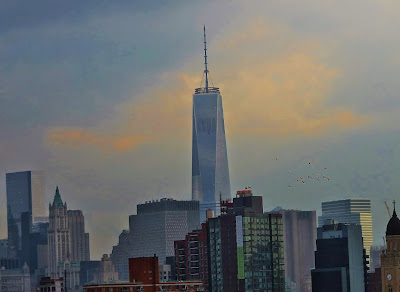 Before this rain earlier this evening… via Bobby Williams…
Posted by Grieve at 9:32 PM No comments:

Earlier this morning, we posted the photo (via Time magazine) of the neighborhood from atop of the One World Trade Center ... 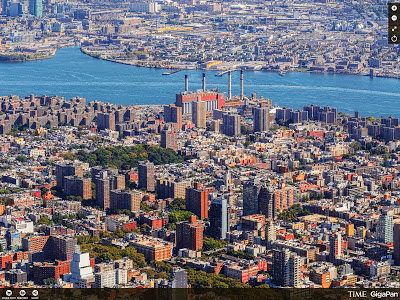 East Village resident Felton Davis just shared this ... a scan from one of several hundred Kodachome slides from the World Trade Center Observation Deck from the 1970s (this particular shot is circa 1978)... showing the neighborhood (and more) from a similar angle... 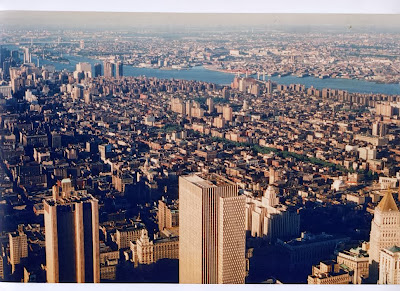 Also, as a bonus, here's a photo at sunset showing the shadow of the Twin Towers extending all the way across the East River and into Williamsburg... 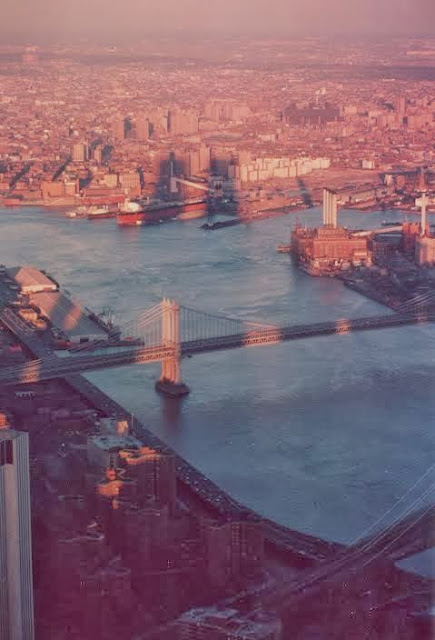 What can YOU see?

You made have seen this feature yesterday when it was making the rounds... Time magazine has this mind-boggling (depending on when you are looking at it) photograph from the top of the One World Trade Center.

Gothamist had some info from the news release about how Time got this panoramic shot:

[T]he magazine worked with Gigapan "to build a rotating camera that could withstand the conditions atop the tower. An eight-month process of design and construction resulted in a 13- foot-long aluminum jib that would attach to the base of the spire, and serve as a rotating arm for the camera. Over five hours of shooting, the camera produced nearly 600 images that were then stitched together digitally into a single massive ­image of everything the eye can see in all directions. Users can zoom in and out of the panoramic photo to take in the entire city."

EVG friend Pinhead zoomed toward our part of the city ... 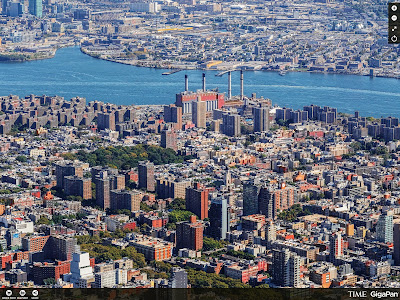 Per Pinhead: "Shades of the old Shorpy's Con Ed pic." 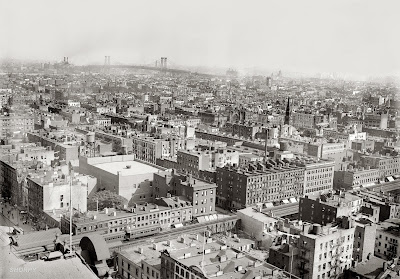 [Click on image to enlarge]
Posted by Grieve at 5:05 AM 3 comments: