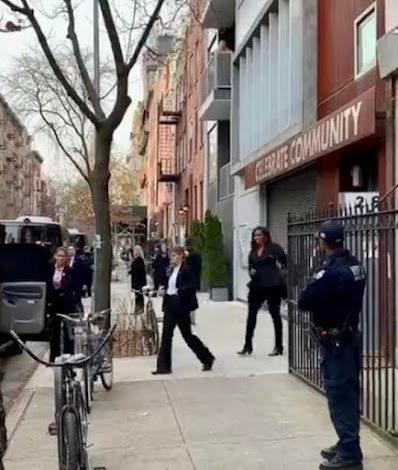 Earlier today, former White House chef Sam Kass was thought to be the main event in a talk on healthy eating over at the Lower Eastside Girls Club on Avenue D and Seventh Street.

Obama and Kass then served food to each individual girl before the group sat down for lunch and conversation.

That passage was from ABC 7. (This Vanity Fair piece has more details on the event.)

#TFW a legend walks into your space! @michelleobama words cannot express how much today meant to us. TY for the heartfelt conversation and continuing to be an incredible inspiration to us. And @samkassdc TY for a delicious lunch w the best surprise guest we could ever hope for! #michelleobama #blackgirlmagic 🖤💪🏾👑

Also yesterday, Obama signed copies of the book at the Barnes & Noble on Union Square.

Meanwhile, around the Girls Club, word spread about the special guest (Obama, not Kass) ... and a crowd gathered outside. East Village resident Angeline Rodriguez shared this video clip...

"It was a really nice community moment, with everyone meeting or recognizing neighbors and talking about how much they admired Mrs. Obama's work," Rodriguez told me.
Posted by Grieve at 4:45 PM 14 comments: