A brake in the action

A reader notes this Alfa Romeo on Stanton Street with a curious sign on its windshield... 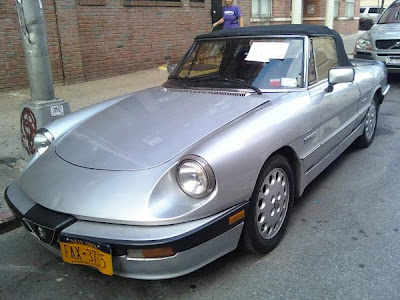 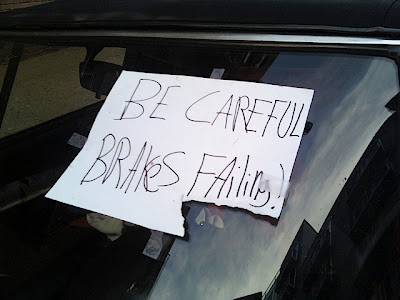 The reader asks good questions: Why would someone put this sign on their car? Do they expect someone to steal it, and they just want to warn them about the failing brakes? Or maybe someone put the sign on the car as a joke? Or...

[Photo by Cat Sitter in the City]

Yesterday, our friend Cat Sitter in the City told us that Lady Gaga was giving Anderson Cooper and film crew a tour of her old Lower East Side haunts, including her onetime home at 176 Stanton. This apparently ticked off the super, who called the NYPD to complain about her intrusion...

In any case, as a tipster told us, perhaps the super didn't want anyone to know that workers were renovating part of the building — without any proper permits from the DOB.

Also, several readers pointed out that this interview will be part of Cooper's "60 Minutes" feature on Lady Gaga that airs before the Grammy Awards on Feb. 13.

Exciting international news developing now on Stanton Street ... CNN's Anderson Cooper with camera crew is interviewing former LES resident Lady Gaga. And our very own Cat Sitter in the City is on the scene. She filed a live report ... Lady Gaga is showing Anderson her old stomping grounds at 176 Stanton... it appears that they enter the building for a tour... afterwards, the pair walk toward Clinton Street, where a police car pulls up. Lady Gaga says hello, etc. They move on. Then! The police car pulls in front of 176 Stanton, where someone who could be the super emerges and starts screaming and gesturing. Basically, he's pe-od that Lady Gaga got into the building... Minutes later, the super is still screaming.

One other note. "She was not dressed properly for the weather," Cat Sitter reports. "But she's Lady Gaga." So, no sleeves, stockings, that kind of thing.
Posted by Grieve at 1:57 PM 19 comments: 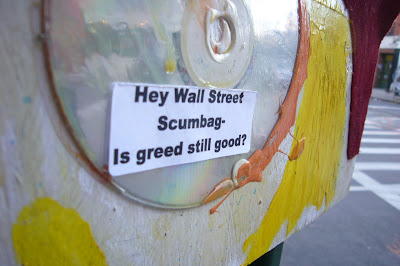 Spotted at the corner of Clinton and Stanton in the LES.
Posted by Grieve at 6:23 AM No comments:

Taking another look at Clinton and Stanton: Where's the synagogue?

Just a few follow-up items from my Remembering 172 Stanton St. post from yesterday...First, thanks to commenter KMC for the link to the photo below of what Clinton and Stanton used to look like... 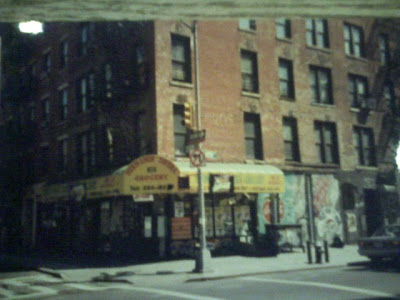 Then, something was bothering me about the artist's rendering of what the corner will look like soon courtesy of the new million-dollar condo 32 Clinton... 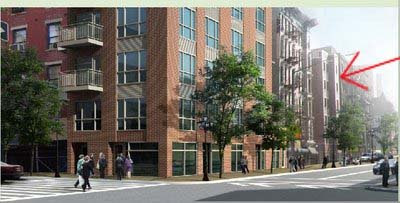 This is what it actually looks like as of yesterday...something's missing from the artist's version and reality... 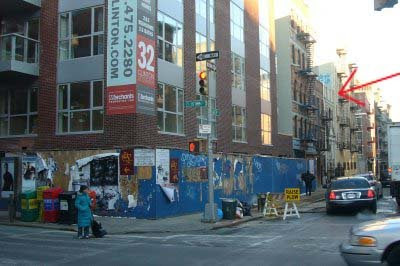 It's the historic synagogue at 180 Stanton Street...I don't see that in the artist's version...it's replaced by what looks like a fancy new building.

I hope the artist doesn't have any kind of inside information...
Posted by Grieve at 6:53 AM 2 comments:

Jan. 24 marked the 11th anniversary of an ugly day in LES history. On that cold, drizzly day in 1998, the lower portion of the rear wall of the building at 172 Stanton St. gave way at 8:58 a.m., as the Times reported. According to the Buildings Department, rainwater apparently got into the wall, which was weakened by years of deterioration, and loosened the bricks and mortar.

Some 25 residents were evacuated as a safety measure. City officials told them they could return to collect their things. As the Times tells it:

But in their dash for safety, many residents of the partially collapsed building left with only their clothes, leaving behind pets, family heirlooms and other valuables. The collapse occurred while many residents were still asleep.


The building was later demolished, angering the tenants who said they had been given no chance to rescue pets or belongings.

Mrs. Grieve and I lived across the street from the building at the time. We watched the horror show unfold. We watched as city officials quickly decided to raze the building, leaving the desperate residents begging officials to allow them a moment to retrieve some personal belongings...their pets...wedding bands...cherished family photos...

Residents who tried to get a court injunction allowing them to remove pets and belongings from the building before it was demolished at about 8:30 P.M. accused city officials of speeding up the demolition when they were informed of their intentions.

"I said, 'Give me half an hour,'" said Marcelino Garcia, a resident who said that he had spoken to an official from the Mayor's Office of Emergency Management. When people outside the building started chanting, demanding that it be saved, Mr. Garcia said, the official got on a cellular phone, "and boom, that was it."

Indeed. Although the building looked fine, the official line was that it was extremely unstable. We watched from our rooftop across the street when the century-old tenement building came down. The five-stories were split open. Bedrooms were quickly exposed. We could see pictures on the wall. An unmade bed. A bureau of clothing. We had our cameras, but were too sick to actually take any photos.

One resident, Marc Friedlander, 35, a video artist, said he had nearly $20,000 worth of cameras and other video equipment in his apartment, as well as the entire collection of tapes of the downtown art scene he has documented over the last 15 years.

"It's priceless what I am losing in there," he said.

Mr. Garcia, who was able to grab his dog, a bichon frise, on his way out, said his canary flew away during the pandemonium. His wife, Milagros, left her wedding ring.

For most of the afternoon, Roberto Carreara, 66, and another resident, Stanley Kleinkopf, stood near the police yellow tape and pleaded to be allowed to rescue their cats.

"Please, please," Mr. Carreara begged an officer repeatedly about retrieving his cat. "He's all I got."

The cat, Honey, was never seen again. Kleinkopf and his wife Ann had lived in that building since 1958. They lost everything. As did most residents. A lifetime gone. It took 12 hours to bring down the building, an absurdly long time for something deemed so unstable, such a threat to life and limb.

Arguably the worst part of the ordeal as a witness came the following day, when the residents -- some 25 in total -- were brought back from the Westway Motor Inn near LaGuardia where the Red Cross placed them. A waterlogged pile of household items, including Friedlander's guitar, now with a broken neck, were lying on the sidewalk. The residents, mostly still in their clothes from the day before, glumly sorted through the pathetic mound. The rest of the building and its contents were hauled off by a private demolition company hired by the city.

In a follow-up article in the Times on May 10, 1998, "Only 3 of the 25 have found new homes; half remain in shelters and single-room-occupancy hotels. The others depend on the waning sympathies of friends or relatives."

There are theories that "the landlord and the city jumped at an excuse to remove the rent-stabilised tenants from the building," according to a post on RalphBorland.net and a subsequent article published at tenant.net.

The lot stayed empty as long as I can recall. 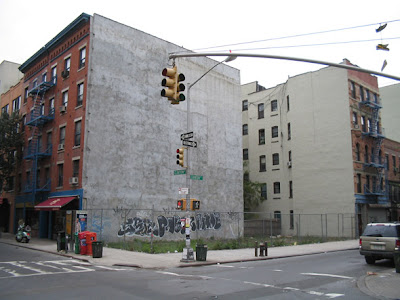 We moved several blocks away in subsequent years...I think of Jan. 24 every time I pass by the corner of Clinton and Stanton. Today, the million-dollar condo on that corner is nearly ready for occupancy. 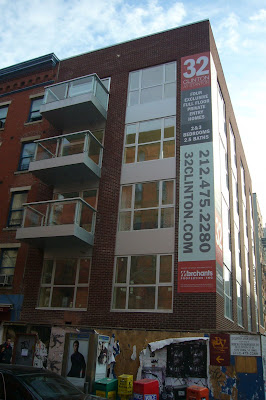 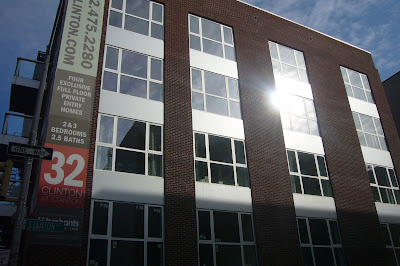 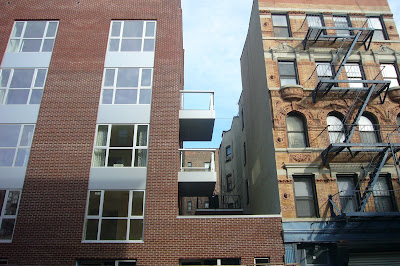 On Stanton Street between Clinton and Suffolk. This promises to be even more of a hazard with the fresh snowfall... 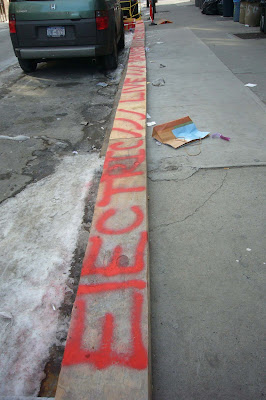 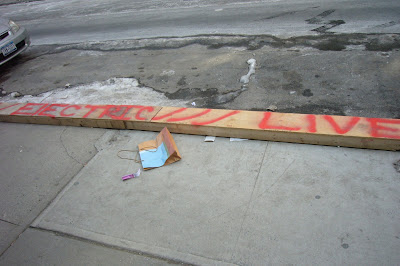 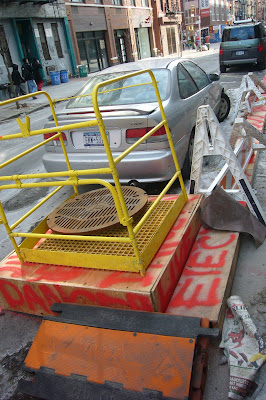 Posted by Grieve at 6:45 AM No comments: