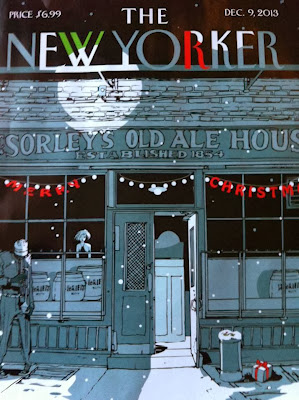 Finally had a chance to see this week's issue of The New Yorker… which features a familiar sight on the cover: McSorely's. The illustration, titled ''Tis the Season," is by Istvan Banyai.

Here's more about it:

“I am almost as old as McSorley’s,” says Istvan Banyai, the artist behind this week’s cover. “It’s a quintessential New York landmark that still has a character,” he continues. … "I loved to go to McSorley’s when I lived in New York, before I moved to the woods in Connecticut. It has a lovely atmosphere, and it’s a good place to talk to strangers … and forget the Internet.

Email ThisBlogThis!Share to TwitterShare to FacebookShare to Pinterest
Labels: McSorley's, The New Yorker

A Valentine's Day gift from The New Yorker 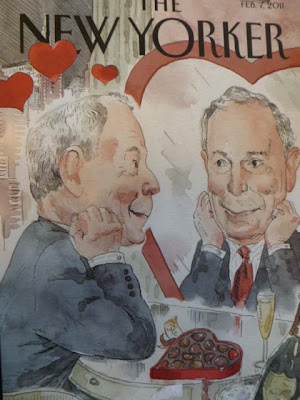 It's epic. Here's how it starts:

Michael Bloomberg has never been the sort of public speaker who makes people faint in his presence. He talks too quickly, mispronounces words, and has a weakness for self-referential jokes, at which he smirks readily, like a boy who knows that his mother approves.

McGrath's piece is roughly 10,000 words, so.... here are just a few interesting passages.

Bloomberg took office during a recession, and quickly established himself as a bold and decisive fiscal manager, ultimately demonstrating, as his friend Mitchell Moss, an urban-planning professor at N.Y.U., says, that New York was “open for business after 9/11.” As the economy recovered, Bloomberg set about trying to transform the city, on a scale not seen since the days of Robert Moses. “I think if you look, we’ve done more in the last seven years than — I don’t know if it’s fair to say more than Moses did, but I hope history will show the things we did made a lot more sense,” Bloomberg told me. “You know, Moses did some things that turned out not to be great: cutting us off from the waterfront, putting roads all along the water.” The Bloomberg model, under the direction of Deputy Mayor Dan Doctoroff and Amanda Burden, the City Planning Commissioner, was based to a large extent on undoing the Moses legacy: rezoning for commercial and residential use large tracts of waterfront property that had once been the province of industry.

“If he weren’t sometimes such a dick, it would be an unbearable beat.”


Illustration: Gerald Scarfe
Posted by Grieve at 6:59 AM No comments:

"Without the fancy job or the big nut, it gets harder to hang around"

In The New Yorker this week, Nick Paumgarten writes a piece titled "The Death of Kings -- Notes from a meltdown." The story is online, though you need to be a registered New Yorker user for access.

"As for the co-op classes, the Wall Street set, it can seem that the loss they fear most is the loss of face. No one seems to want anyone to know. In one sense, there is less shame in failure now, because it is widespread and undiscerning. Still, it smarts. There are successful circles in which success (to say nothing of money) isn't everything, but without it you'd better bring something else. Charm, wit, talent, kindness and generosity certainly help, but only if they complement characteristics that could be more readily converted into social or professional capital. Without the fancy job or the big nut, it gets harder to hang around."

Posted by Grieve at 6:04 AM No comments:

Email ThisBlogThis!Share to TwitterShare to FacebookShare to Pinterest
Labels: The New Yorker, the recession, Wall Street

Nick Paumgarten on the possible implications of the Wall Street meltdown (under the heading in The New Yorker this week of Dept. of Magical Thinking):

For example: let’s postulate that the collapse of the financial-services industry spells catastrophe for New York City, a return to the nineteen-seventies. Lost tax revenues, budgetary shortfalls, unemployment (not only of those in finance but of the hordes who rely on them), plunging property values, vanished retirement accounts. Let’s cut this up, like a pile of bad debt, into various strips, and, as the rating agencies did to various slices of subprime-mortgage debt, take the top layer and, abracadabra, rate it triple A. Throw out the other strips, the grim probabilities—the crime, the decaying infrastructure, the hardship all around, the heroin and the syphilis. What do we have left? The bright side: maybe Manhattan will become affordable again, and cool, and dangerous. Dangerous in theory, but not to you or your family and friends. Dirty, but in a good way. Night clubs where anything goes. Art, music, Billy Martin.

Posted by Grieve at 9:00 AM No comments: 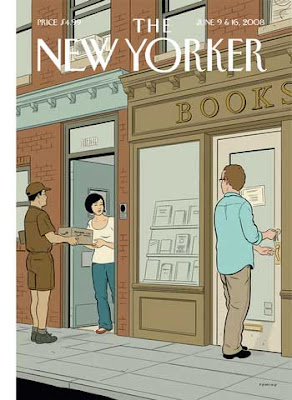 Got my copy of The New Yorker in the office today. I was curious to see Adrian Tomine's cover after reading about it last night at Flaming Pablum. As Alex says in his post: Look well, for it's this very scenario that's forcing independent mom'n'pops out of business.
Posted by Grieve at 11:16 AM 1 comment:

Email ThisBlogThis!Share to TwitterShare to FacebookShare to Pinterest
Labels: mom and pop shops continue to close, The New Yorker

"The Lying, the Bitch, and the Wardrobe"

A review of a review! From Gawker's Ryan Tate:

Save for the use of the lame adjective "anti-sophisticated," Anthony Lane's New Yorker evisceration of Sex And The City is a schadenfreudian delight. Among the movie's crimes: Carrie whores herself out for a custom closet (women in the audience actually applauded); Carrie is more concerned about losing her access to nice clothes than about the disintegration of her marriage; and, apartment-hunting in a predominately Chinese neighborhood, Miranda, in a charming bit of racism, cries out, "White guy with a baby! Let’s follow him." Lane says the film is often "pornographic—arouse the viewer with image upon image of what lies just beyond her reach" and suggests the subtitle "The Lying, the Bitch, and the Wardrobe."

Then it gets really beautiful:

At least, you could argue, Miranda has a job, as a lawyer. But the film pays it zero attention, and the other women expect her to drop it and fly to Mexico without demur. (And she does.) Worse still is the sneering cut as the scene shifts from Carrie, carefree and childless in the New York Public Library, to the face of Miranda’s young son, smeared with spaghetti sauce. In short, to anyone facing the quandaries of being a working mother, the movie sends a vicious memo: Don’t be a mother. And don’t work. Is this really where we have ended up—with this superannuated fantasy posing as a slice of modern life?

Posted by Grieve at 6:00 AM No comments: