This week's issue of The Villager looks at the local independent record-shop scene post Virgin Megastore. "Local stores have been closing almost as rapidly as global CD sales have been falling. But for the stores that remain, managers say they’ve noticed an influx of a younger crowd — the last vestiges of Virgin, come to find their Hannah Montanas, Dave Matthews Bands..."
Posted by Grieve at 6:49 AM No comments:

Just before 10 a.m. today, some 30 people were waiting in line for the last day of the Virgin Megastore on Union Square. I was not one of them. But when the doors opened, I decided to go in... I was ready to take a picture of the crowd entering the store, but a woman carrying a small dog shoved me. 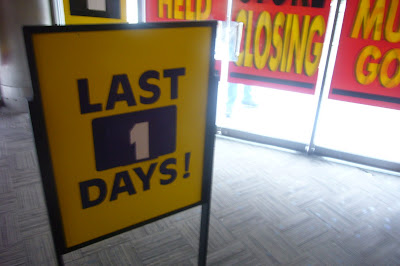 Everything was 90 to 90 percent off.... One of the workers yelled, "Buy everything people!" And I said, Good luck with that, people. 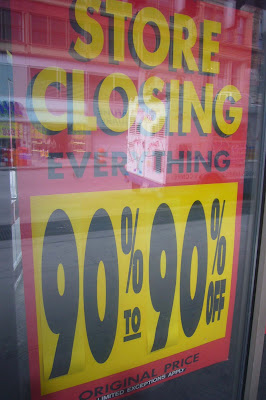 I was unfamiliar with 90 percent of the artists left behind. Well, there was the Jimmy Buffett Christmas record. 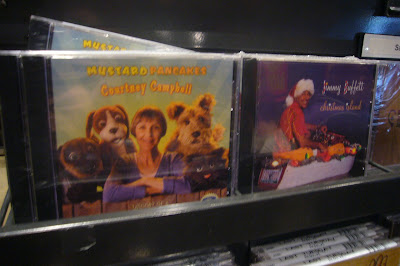 The remaining crap for sale was kept to a small space. The rest of the hulking store sat empty. Somewhere downstairs, workers were yelling, their voices echoing throughout the former Megastore. First time that I'd ever been in here without some music or movie blaring from the speakers. 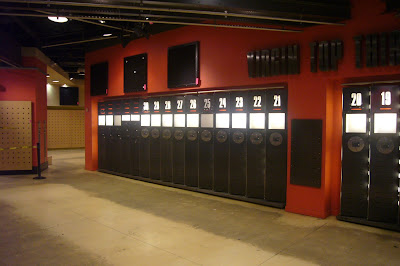 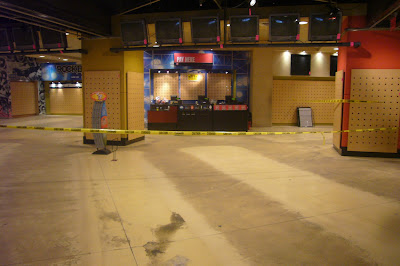 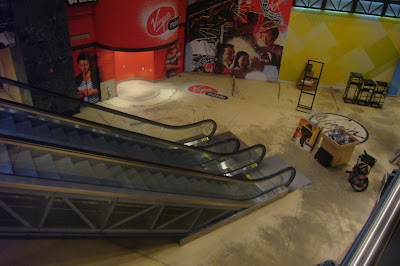 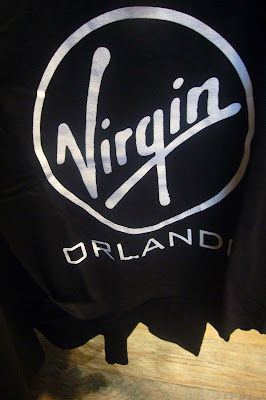 As of yesterday, there were eight days left for the Virgin Megastore on Union Square. All CDs and DVDs are now 50 percent off their hiked up prices... 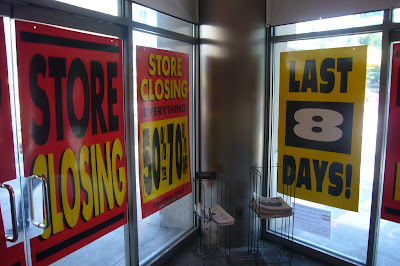 If you look hard enough, then you may find something that you may want... Otherwise, it's grotesque consumerism at its worst... 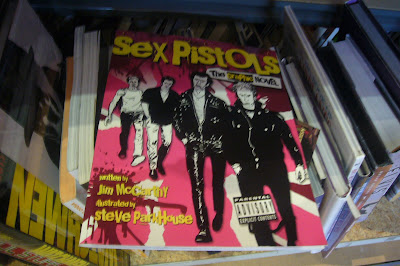 What remains is the Virgin Overstock Megastore. Things that were shipped in from Virgin Warehouses around the world just for the closing sale. What else could explain, say..... Dozens and dozens of "Hellboy II" action figures. Dozens and dozens of copies of the attempt to make Rick Springfield a movie star in "Hard to Hold." Dozens and dozens of copies of U2's "No Line on the Horizon" limited box set including CD, hardcover book, poster, featurette on the Edge buying a ski cap, a behind-the-scenes look at Larry Mullen Jr.'s First Communion and Bono's photo album of bikini-clad groupies. It's times like these when you realize there have been like 37 versions of "Blade Runner" released. You remember how little respect giant entertainment groups have for consumers.

And so many things whose existence was so unnecessary. 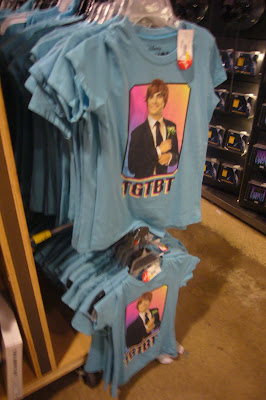 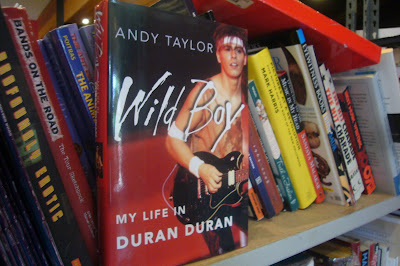 Oh, and the complete series (six seasons!) of "Dr. Quinn, Medicine Woman" is 50 percent off its $232 sticker price. 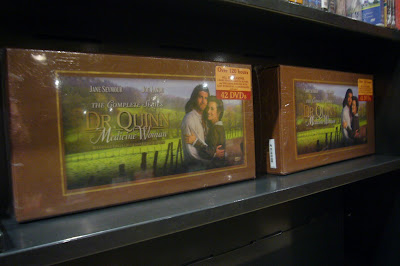 According to this week's issue of The Villager (not yet online), Tommy Hilfiger is the latest retailer to sniff around the carcass of Union Square South. There has been some talk of Tommy Boy taking over the Circuit City space or, perhaps, the soon-to-be-departed Virgin Megastore. As the paper notes, Tom has considered opening a "concept store" in one of these spots. Meanwhile! A few other items from the article...Filene's Basement may shutter its Union Square South location...and the Au Bon Painful on Fifth Avenue at 15th Street closed. Now where will I go for a decent sandwich in this city? (And if anyone thinks I'm serious about that last line...)
Posted by Grieve at 6:46 AM No comments: 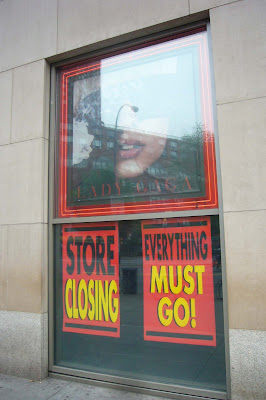 As you may have heard, the Virgin Megastore is closing on Union Square. I was finally lured in Saturday like a sucker with the "up to 40 percent" off signs... Also, I wanted to make a bid on the Lady GaGa banner in the window. (Unfortunately, my offer of "You pay for the can of gas and I'll rip it down and set it on fire on 14th Street" wasn't accepted.) 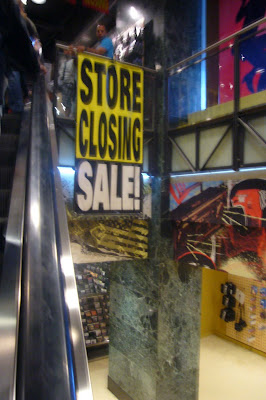 Well, as for the rest of the store. The new CDs that are usually marked for sale with a $13.99 sticker over the $18.99 sticker...were all $18.99 again. And they were 25 percent off. Ditto for the DVDs. Most new DVDs were $24.99. So with the 25 percent off -- you're pretty much paying what you were paying before the store was going out of business. I'm sure there were bargains elsewhere. Or not. I didn't stick along long enough to dig. Oh, one thing I saw for 40% off? Stationery! Which was all sold out. And the Blondie pocketbooks were also 40% off. 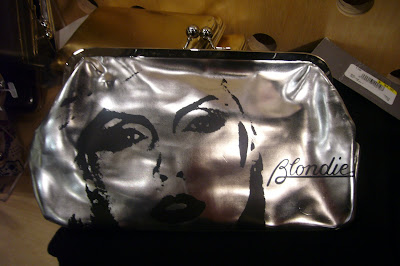 The end is near 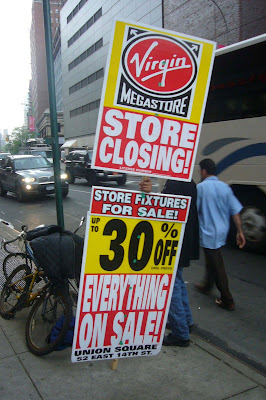 At 14th Street and Fourth Avenue. 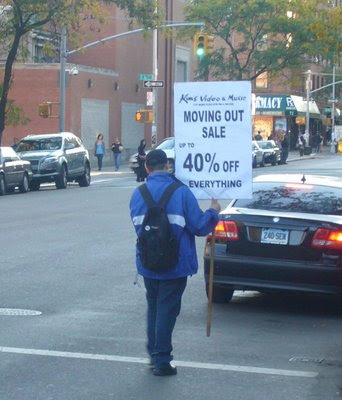 Wal-Mart passes on Virgin Megastore space at Union Square, though are "still interested" in cracking the Big Apple 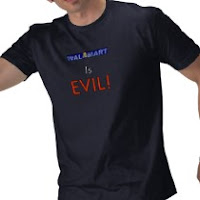 Manhattan's retail rent rollback is causing Wal-Mart to give the city another look.

The giant discount chain has shopped for space in Union Square and among the big-box stores along Sixth Avenue in Chelsea, The Post has learned.

Wal-Mart recently passed on a proposal by Related Companies for a two-level store of about 57,000 feet in Union Square where Virgin Megastores and Circuit City are closing, sources said.

The company's real-estate scouts have also been roaming the area around 620 Sixth Ave., said the sources.

Wal-Mart spokesman Steven Restivo said the Union Square sites "were never under consideration." But he said the company is "still interested" in opening stores in New York, despite strong political and union opposition.

Posted by Grieve at 7:46 AM No comments:

The last American Virgins to close

You probably saw the news last Friday that the two Virgin Megastores in New York (Union Square, Times Square) will close in the coming months. (It was previously reported that just the Times Square location would shut.) Then late yesterday, Billboard reported that all of the remaining Virgin stores in the United States were being shuttered.

This has certainly been discussed somewhere...but! Are there any chain record stores left in NYC? I've lost track. The F.Y.E. on Sixth Avenue near Radio City is long gone, right? And I don't count those combo chains like Best Buy or Barnes & Noble that may sell music...or locals like J&R.

Anyway, I'm no fan of Virgin or any national chains...And Alex expressed exactly how I feel about all this in a post from this past January:

I don't honestly believe the Virgin Megastore is all that great. Sure, it's convenient, but it's ultimately just an arguably soulless chain store that caters to the lo.com.denom-addicted masses. That said, it's yet another place to buy music that is vanishing, and I find that rather sad.

So maybe this is a little good news for the remaining indie record shops around town? Otherwise, like everything else, it's a bad time for music...including Mondo Kim's, Etherea (a new record shop at this spot is in the works with a different vibe)...Strider Records maybe... Vinyl specialist Malachi Records quietly closed after just six months. They were in a rather obscure second-floor location at Fulton and Nassau in the Financial District....What else am I missing? Oh, and not to forget what's happening to Music Row.

Related:
In case you haven't seen Ben Sisario's "The death and life of great Manhattan record stores" piece from last April.
Posted by Grieve at 6:56 AM 2 comments: