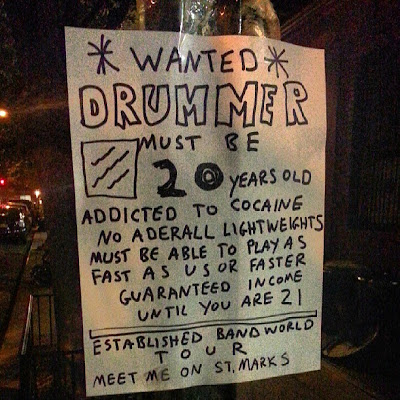 Spotted last night on Second Avenue and East Second Street. Do you have what it takes?

Photo by Paul Kostabi via Facebook.
Posted by Grieve at 1:13 PM 7 comments:

Like The Virgins, practicing for the very first time...

So, as you may have heard, some residents have been annoyed about The Virgins practicing in the lead singer's apartment on Second Avenue between St. Mark's Place and East Seventh Street. (DNAinfo had the story yesterday; the Post followed-up later.)

"I think they are so full of themselves they keep their window open," said the resident, who declined to provide her name, at a meeting of the Ninth Precinct Community Council Tuesday night.

Though she admitted that the band's sound is polished, the 25-year resident of the block said the regular racket has been going for three weeks straight.

Perhaps it was all prep work for their CMJ show last night at Brooklyn Bowl. (And they have a new record coming out early next year.)

Kirk Villalobos, 33, who works at the popular French fry eatery Pommes Frites, said he can also hear the band playing from the restaurant and that patrons often step out of the spot to start dancing on the sidewalk.

"I like their music," Villalobos said, adding that he's heard the band rehearsing in the space for months. "Especially the guitarist when he plays a good solo."

(Will the city fine Pommes Frites for not having a cabaret license?)

Funny, though, that any bands actually still live around here.

"It's an odd choice for them to be right there," said the neighbor who admitted that she actually owns some of their albums. "Most bands are in a garage in Brooklyn."

(By the way, The Virgins have only released one EP and one album.)

And, finally, back to DNA for the classic "If you don't like/want" quote:

Andrew Mitchell, 34, who said he lives next door to The Virgins' practice space, has heard the band playing on numerous occasions, but always during "reasonable hours" of the day.

"A lot of people would say, if you don't want a band rehearsal near you," he said, "don't live in the East Village."

[H/t Madonna for that dreadful headline inspiration]
Posted by Grieve at 6:30 AM 16 comments:

Spotted on the Bowery... 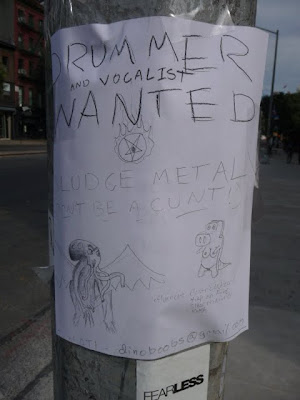 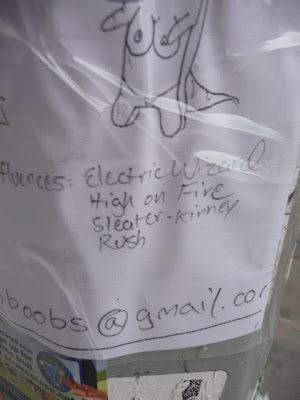 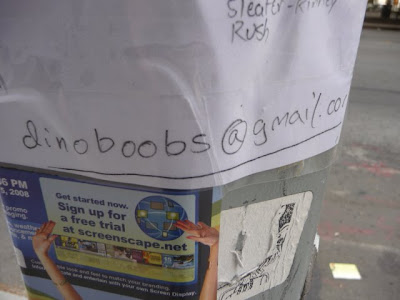 Meanwhile, Rush! Maybe a little too early in the morning for this, but...

Posts that I never got around to posting: Band looking for non-jerk and merc types 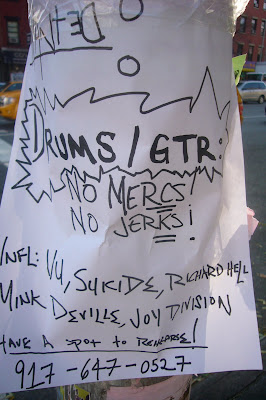 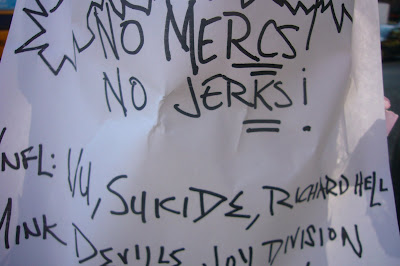 First Avenue near Seventh Street.
Posted by Grieve at 6:36 AM 4 comments: