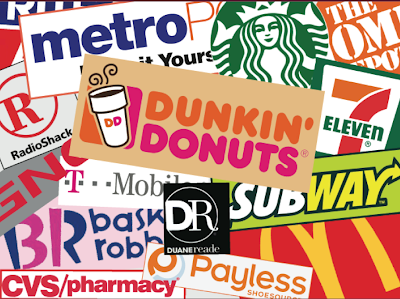 It’s time for the mayor to step up and take action against the destruction of the city’s character.

Start by following the example of San Francisco, where City Hall tightly controls “formula retail,” as in big chain stores. If former Mayor Giuliani could keep adult businesses from operating near one another, then de Blasio can keep national chains from doing the same.

Starbucks and Marc Jacobs should not be allowed to have multiple stores within a few blocks, and we don’t need Walgreens down the street from CVS.

Give fines to landlords who leave commercial spaces vacant, creating blight while they wait for the right price.

While general commercial rent control may be unworkable, we can protect what little remains of the city’s oldest and most beloved small businesses by creating a selective rent control program. 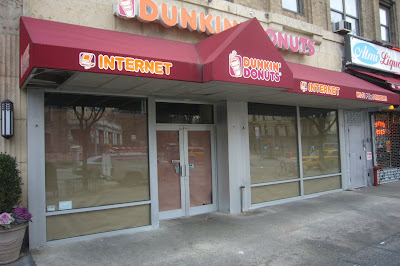 Yesterday, we reported on The Center for an Urban Future's fourth annual study ranking the national retailers with the most store locations in New York City.

It's a huge survey and, to be honest, we didn't dig into as much as we usually do. But! Our friend Jen Doll at Runnin' Scared did... and here's a stat that jumps out: The East Village came in third for most chains overall in New York City with 169. (This is just for the 10003 Zip Code that includes Union Square and parts of Fifth Avenue.)

Overall, the report found that the explosion of national chains has slowed somewhat over the past year in New York.
Posted by Grieve at 10:42 AM 4 comments:

Survey: 'the explosion of chain stores in New York has slowed somewhat' 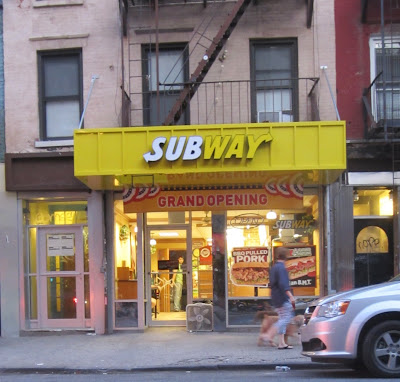 The Center for an Urban Future today released its fourth annual study ranking the national retailers with the most store locations in New York City. This year’s study finds that the sluggish economy may be finally catching up with chain stores in New York. For the first time in the four-year history of the Center’s annual ranking, the explosion of chain stores in New York has slowed somewhat.

Nearly a third (31 percent) of the national retailers that were listed in our ranking last year reduced their presence over the past 12 months, compared to only 20 percent of chain stores that contracted between our 2009 and 2010 studies. And while Dunkin Donuts tops our ranking for the fourth consecutive year, for the first time the company did not show a net gain in stores—it held steady with 466 stores across the five boroughs, the same number as last year.

While the growth of chain stores has slowed, 86 of the retailers that were listed in last year’s study (28 percent) actually added locations over the past 12 months. Overall, the number of national retail stores in the city grew by 1.6 percent over the past year, as the 307 retailers included in last year’s ranking expanded from a total of 6,883 stores in 2010 to 6,994 stores in 2011. But the 1.6 percent increase is far below the 4 percent rate of growth in chain stores between 2009 and 2010.

Subway again ranked second on our list, but it began to close the gap between it and Dunkin Donuts by adding 41 new stores over the past year, an increase of 10.5 percent. The sandwich chain now has 430 stores across the five boroughs, up from 389 in 2010 and 335 in 2008. Metro PCS has quickly vaulted into the number 3 spot on our ranking, with 272 locations across the five boroughs. Starbucks dropped to fourth, though it grew by three percent over the past 12 months and now has 263 stores in the city. Other retailers with noteworthy gains in stores over the past year include:

Ninety-six companies (31 percent) reduced their footprint in the city over the past year. A few notable examples include:

There are now 194 Starbucks in Manhatan

The Center for an Urban Future, a think tank based in Manhattan, today published its third annual ranking of national retailers that have the most stores in New York City.

This year’s report reveals that that despite the sluggish economy, more national retailers have expanded their presence in the five boroughs over the past year than those that have reduced their number of stores here. The report shows that every borough registered a net increase in national chain stores during the past year, with Brooklyn experiencing the greatest percentage increase of any borough. And for the third year running, Dunkin Donuts comes in as the national retailer with the most stores in the city. Dunkin Donuts now has 210 more stores in the five boroughs than Starbucks, the retailer that came in third on our list.

Overall, the 280 national retailers listed in our 2009 report now have 4.1 percent more stores in the five boroughs than a year ago — increasing from 6,335 stores in 2009 to 6,595 in 2010. Thirty nine percent of those retailers have expanded their footprint in the city during that time, while 20 percent now have fewer stores and 41 percent have the same number of locations. Only one of the chains on last year’s list closed all of their New York City locations this past year, compared to four that shut down between our 2008 and 2009 reports.

Brooklyn had the largest percentage gain of any borough over the past year. The retailers counted in our 2009 report now have 1,325 stores in Brooklyn, up from 1,258 last year — a 5.3 percent gain. Manhattan had the next largest percentage gain (5.1 percent), followed by the Bronx (4.7 percent), Queens (1.9 percent) and Staten Island (1.5 percent).

To make our annual ranking of national retailers as accurate as possible, we add new retailers to our list every year — some of which have entered the New York market in the past year other which we inadvertently left of the list before. This year’s report includes 26 new national retailers, from Red Mango (14 stores) to Lego (2 stores). Overall, this year’s report includes 306 retailers, which have a total of 6,703 stores in the city.

Dunkin Donuts is still far and away the largest national retailer in New York. It now has 466 stores in the city, up from 429 last year and 341 in 2008. Though Dunkin Donuts is only the fourth largest national retail chain in Manhattan — with 115 stores in the borough, it trails Starbucks (194), Subway (163) and Duane Reade (161) — it has the most locations in each of the other four boroughs.

Despite its 2009 announcement that it would close some of its New York City locations, Starbucks actually has 11 more stores in the five boroughs this year. It moved up to third place in the rankings, from fourth in 2008 and 2009. Duane Reade climbed up one notch, to fourth place, while McDonald’s has fallen to fifth from its third rank in 2008 and 2009; the burger chain has 17 fewer chains than last year (from 258 to 241 stores).

T-Mobile wasn’t the only cell phone store to increase significantly over the past year. Metro PCS grew from 7 locations in 2009 to 35 this year, a staggering 400 percent increase, while Sprint (from 24 to 33) and Verizon Wireless (45 to 50) also registered notable gains.

Find a PDF of the whole shebangy report here.

After inexplicably speculating this morning about the future of the Dunkin' Donuts on Second Avenue (as in, is it really closed?), a well-informed reader reports the following:

This location is closed due to extremely high rent and tax. In the future, landlord is planning to split this store, to make more money….

As Esquared said below in the comments:

...even a chain store can't afford the rent in the ev anymore...

Dunkin' Donuts closes on Second Avenue; only 428 left in NYC

Several readers have noted the closure of Dunkin' Donuts on Second Avenue between 10th Street and 11th Street. Serving up Double Chocolate Cake Donuts one day, windows papered up the next. Perhaps it's just a renovation, though you'd think they'd put up a sign or something...

Of course, Dunkin' Donuts is the most dominant (prominent?) chain in NYC with 429 locations, according to the last report by the Center for an Urban Future. This includes two locations right near the Second Avenue spot...First Avenue (below) and 14th Street... 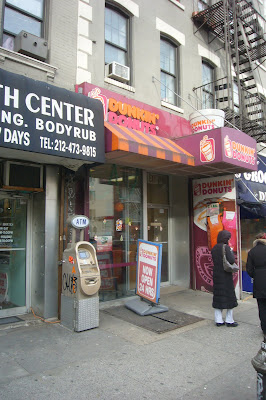 All this reminds me of this fellow below who apparently really liked Dunkin' Donuts...taking the time to memorialize it in paint... 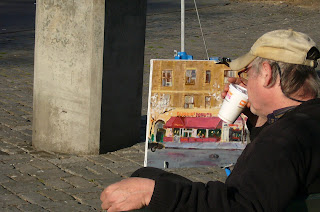 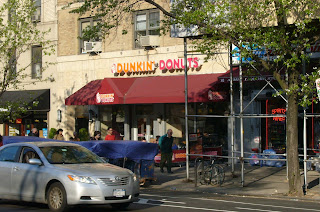 It's not your imagination

It's not your imagination 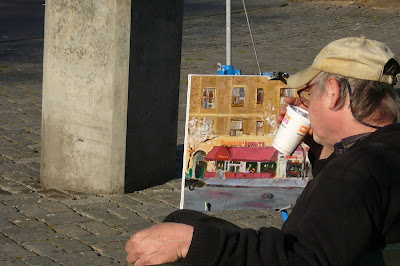 A new study shows what many an old-time New Yorker has been griping about for years - chain stores appear to be taking over.
In its first-ever ranking of national retailers in the city, the Center for an Urban Future yesterday published its list of chains with the most outlets in the five boroughs.
Dunkin' Donuts took the title with 341, ahead of upscale coffee competitor Starbucks, which came in fourth at 235.
The pricey java joint did rank No. 1 in Manhattan with 186, ahead of 78 for Dunkin', which concentrates on the outer boroughs.
Jonathan Bowles, director of the center, a nonpartisan think tank, said he and his researchers conducted the study because, well, they were curious.
"We've been hearing so much talk about the proliferation of national chains in New York and how mom-and-pop stores have been pushed out of the city, but it struck me that there was so little data," he told The Post. "We wanted to provide a backdrop to this discussion."

[Dunkin' Donuts photo by EV Grieve]
Posted by Grieve at 7:06 AM 6 comments: