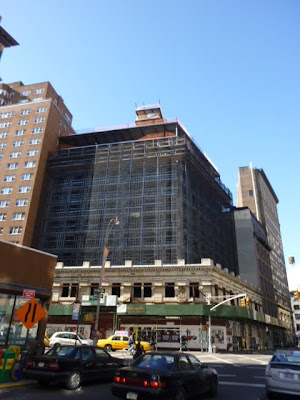 Curbed reports that the long zombified hotel project on 13th Street and Fourth Avenue has a new life via a Hyatt subsidiary...

Per the news release:

The other Hyatt-branded property announced today, slated to open Fall 2011, will be located at 13th Street and 4th Avenue, a block off Union Square, and near Washington Square Park. Union Square is adjacent to some of Manhattan’s preeminent residential and commercial neighborhoods including Chelsea, Gramercy Park, and the Flatiron District. Some of Manhattan’s most celebrated restaurants and popular nightlife spots surround the hotel. The area is extremely popular with residents and tourists alike, and is an activity hub for major hospitals, universities and retail centers. The hotel will offer stunning accommodations to its guests, including private terraces on the second floor, a well-appointed fitness center and an exclusive rooftop lounge. The historic façade and 23 foot ceilings in the lobby will create a grand space for the stylish lounge opening up to 13th Street and a restaurant concept inspired by the local and organic Greenmarket.

I saw this banner in front of the Stock Exchange yesterday ... 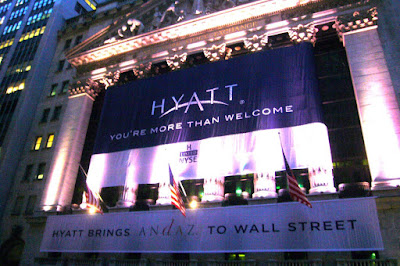 ...Had to find out more about Andaz, the hotel/condo combo at the former JP Morgan Chase HQ on Wall and Pearl Street... been reading a little bit about this for the last three years .... now to some excerpts from the surefire candidate for the News Release Hall of Fame...

Andaz Wall Street, the only hotel situated on Wall Street, will set a new tone of style and optimism in Lower Manhattan when it officially opens on January 18, 2010. Andaz, Hyatt’s newest brand, is devoted to providing simplified, spot-on service and indulgent amenities for its guests. 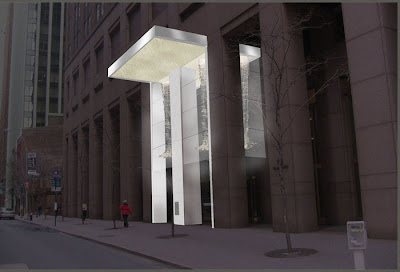 The 253 guestrooms start at a generous 345 square feet, making them some of the largest hotel rooms in New York City. A celebration of light and reflectivity, they feature loft-like ceilings and seven-foot windows. The rooms have a simple aesthetic of contemporary luxury, boasting dark stained oak floors, buttery brown leather headboards and benches, and lavender and camel sitting chairs. Other modern details include textured walls, bleached wood accents, and locally crafted, stenciled metal artwork designed by a Brussels-based artist. 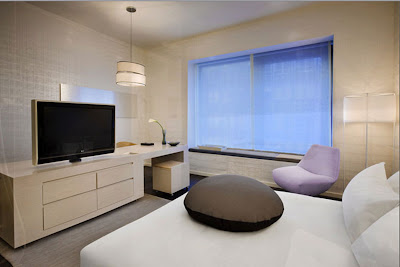 Set in a room that stretches the full-length of the hotel, the restaurant, Wall & Water, which opens for breakfast, lunch and dinner on January 25, features seasonal cuisine with ingredients sourced from the Hudson Valley. Large windows open onto striking views of the East River. The main dining area is furnished with live-edge wooden tables and beautiful glass and iron lighting fixtures. At one end, a 12-guest chef’s table is sheltered behind the open kitchen, and at the opposite end a private dining and meeting room, with views of the garden below, is ideal for entertaining. Bar Seven Five, named for its 75 Wall Street address, will serve classic American cocktails and artisanal appetizers prepared and served in glass jars. 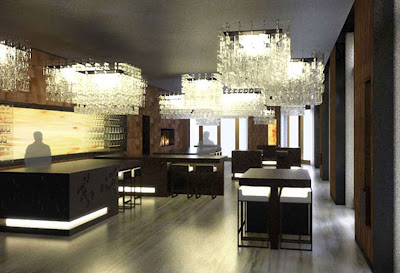 At all Andaz properties, the check-in and service are simplified. Without the doorman, bellhop, and concierge staff at the desk, there is one “host” for each incoming guest. Hosts are steeped in traditional hospitality training as well as a less conventional approach. Andaz understands that the staff at a hotel must be able to field questions and scenarios that one cannot always anticipate, and improvisational skills come in handy. Design house Theory has designed chic separates for the staff uniforms.

Let's just hope the market doesn't tumble 500 points on Tuesday ... that can be so awkward on a grand opening...
Posted by Grieve at 6:46 AM 4 comments:

Wow and wow: Hotties in tiny new hotel rooms on the Bowery (leave your inhibitions at the front desk!)

Finally! The hotel the Bowery so desperately needed! 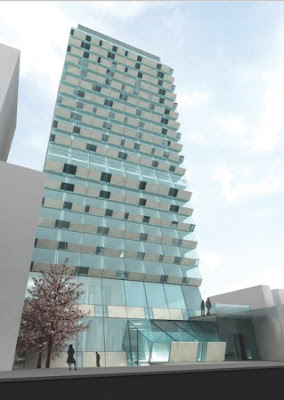 According to a post on Arch Daily, these are the plans for the new Lower East Side Hotel on the Bowery (where?? Is that the New Museum to the left?), which is/was designed by the Office for Design and Architecture. Apparently, the rooms will be very small. And what does this mean? (Hope that you have an architectpreter!) The rooms...

...will feature minimalistic interiors to allow the “guests to use their personal aesthetic as an impromptu installation.” By designing tempered and laminated interior cylinders for the shower, toilet and closet, and using stark colors teamed with expansive city views, the small rooms seem larger than their dimensions.

The concept for entire building grew from the inside out as the architects’ primary concern was how to make a 10 foot 6 inch wide room feel larger than its tight confinement. In such a small space, the “typical bathroom encasement” had to be re-thought, for the room just did not have the capacity to provide adequate space for a standard bathroom.

In other words, you have to shit and shower in front of anyone who happens to be in the room. Such as these hotties, who have nothing better to do than lounge around in tanks tops and undies! (And look down at the commoners below!) 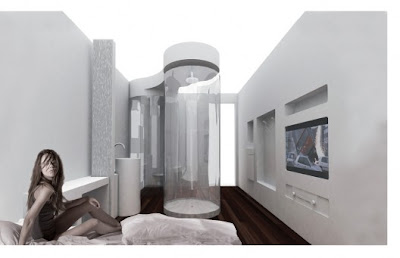 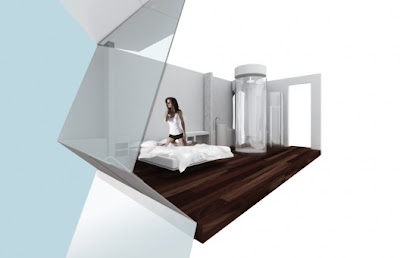 “With the skin of the bathroom removed, the guts of the fixtures were exposed and celebrated. The guest could now experience the entire room from the door threshold,” explained the architects.

Why is the one dude in the renderings fully clothed? Why isn't he sitting there in boxers? Or is he just experiencing the entire room from the threshold? 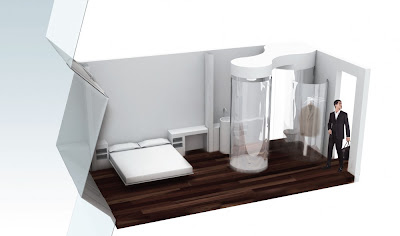