Brooklyn Roasting Company opens a cafe inside the Strand 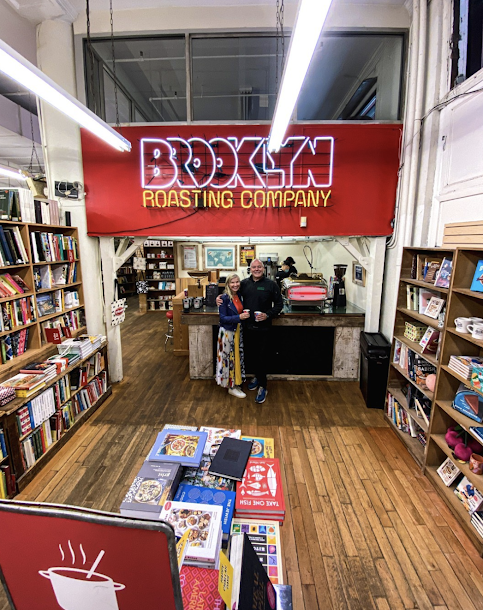 On Saturday, the Strand Bookstore celebrated its 95th year in business ... and on this day, the Strand's flagship location near Union Square officially debuted a cafe on the ground floor with coffee drinks and pastries via Brooklyn Roasting Company. (The outpost also sells tins of a Strand blend of coffee.)
"Bringing coffee to our customers has been a long-time dream for the Strand," CCO Laura Ravo said in a press release about the opening.
The Strand, 828 Broadway at 12th Street, is open daily from 10 a.m. to 8 p.m.
Image via @brooklynroasting
Posted by Grieve at 4:50 AM No comments:

Remembering Fred Bass at the Strand 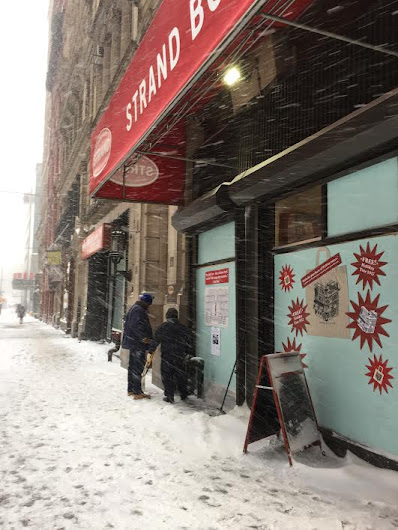 Fred Bass, the 89-year-old co-owner of The Strand, died yesterday. The cause was congestive heart failure, according to multiple published reports.

There's a tribute to him outside the four-level store on Broadway at 12th Street, as these photos by EVG regular Daniel show... 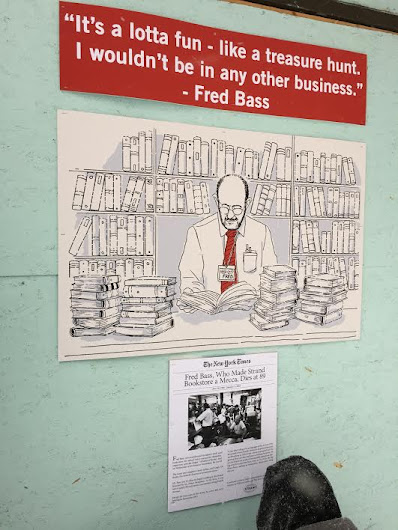 Several outlets have published features on his legacy, including at The New York Review of Books ... and Quartz.

His daughter, Nancy Bass Wyden, will reportedly continue on with the ownership of the Strand.
Posted by Grieve at 6:08 PM 6 comments:

It is with a heavy heart we share that Strand’s owner, Fred Bass, passed away early this morning at home surrounded by loved ones at the age of 89. We thank Fred for his passion and dedication, and our thoughts are with the Bass family. https://t.co/GZ3G6Lg3YB pic.twitter.com/w0U3AS1t9A


In case you missed this news from yesterday.

Here's part of the obituary from the Times:

Mr. Bass was 13 when he began working at the Strand, founded by his father, Benjamin. At the time, it was one of nearly 50 such stores along Fourth Avenue.

Except for two years in the Army, he never left, until retiring in November 2017.

A year after taking over as manager of the store in 1956, he moved it from Fourth Avenue to its present location, on Broadway at 12th Street, where it occupied half the ground floor of what had been a clothing business. He set the Strand on a path of unstoppable expansion, taking over the entire first floor, then, in the 1970s, the top three floors, and adding an antiquarian department.

Bass bought the building on Broadway at 12th Street for $8.2 million in 1997. His daughter, Nancy Bass Wyden, now owns the business.
Posted by Grieve at 4:15 AM 6 comments: 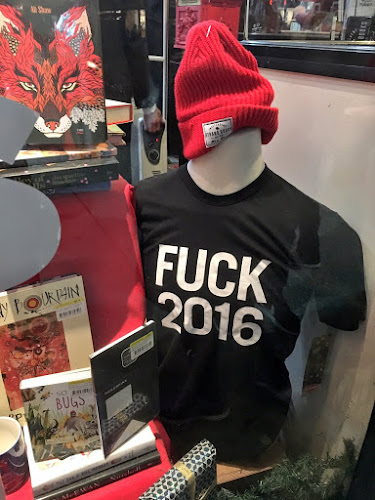 The Strand weighs in on the year... photo last night by @fnytv
Posted by Grieve at 10:00 AM 11 comments:

Email ThisBlogThis!Share to TwitterShare to FacebookShare to Pinterest
Labels: 2016, the Strand

Join us for an exclusive evening in Strand’s rare book room to honor the paperback release of Richard Hell’s acclaimed I Dreamed I Was a Very Clean Tramp. The autobiography has been called “A candid, sometimes brutal tour of punk’s gritty early days" by The New York Times Magazine, and "radically self-aware…wielding prose keen as a diamond knife" by cultural critic Luc Sante.

Buy a copy of I Dreamed I Was A Very Clean Tramp or a $15 Strand gift card in order to attend this event, which will be located in the Strand's 3rd floor Rare Book Room at our store at 828 Broadway at 12th Street.

Previously on EV Grieve:
Richard Hell on his East Village apartment
Posted by Grieve at 5:00 AM 3 comments:

Email ThisBlogThis!Share to TwitterShare to FacebookShare to Pinterest
Labels: Richard Hell, the Strand 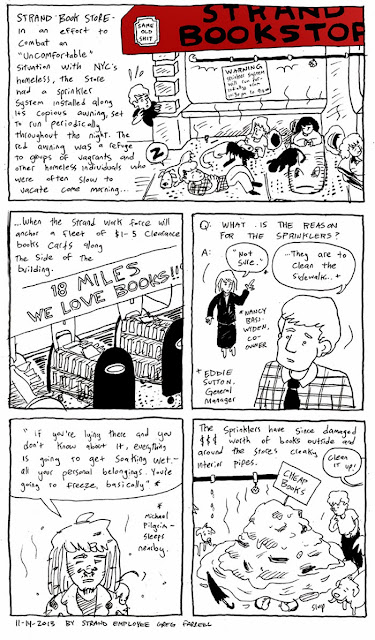 As DNAinfo first reported yesterday, the Strand installed an outdoor sprinkler system to drive away homeless people sleeping under their red awning along East 12th Street, according to employees. (Management had said the sprinklers were there to clean off the sidewalk.)

The incident prompted Strand employee Greg Farrell to draw a comic based on his firsthand experience of the situation.

The comic is posted at the blog "Strand Ask Us," a nine-part account of the labor struggle that took place between the workers and management at the bookstore in the spring of 2012. (A book on this is due next year from Microcosm publishing.)

Farrell said that the sprinklers were installed this past summer. "So, in fairness, there was no risk of anybody freezing to death at the time."

Report: The Strand used sprinklers to prevent the homeless from sleeping alongside the store

DNAinfo reports that the Strand used sprinklers to prevent the homeless from taking shelter at night alongside the bookstore on East 12th Street at Broadway.

"It was to keep people from sleeping out there," said a Strand bookseller who asked that her name not be used. "People used to sleep over there and in the morning we have to put out the book carts, so it was a little bit difficult and uncomfortable for some people."

However, a store manager denied that the sprinklers were intended to drive away the homeless, rather that they are used for cleaning the sidewalk.

And a reaction from Marcus Moore of Picture the Homeless: The sprinkler tactic was "an attack on the homeless population" and "this is not what caring people do to each other." 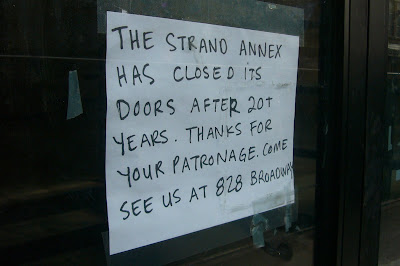 ...and now, I just noticed that a Lot Less closeout store has taken over the space... 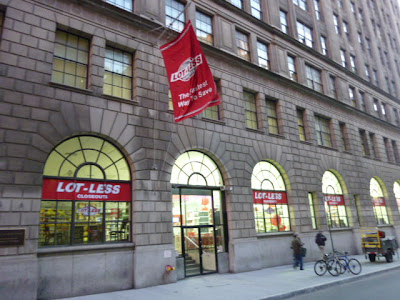 One more strike against the reinvention of Fulton Street and FiDi...
Posted by Grieve at 6:27 AM 4 comments:

Looking at the Royal Building entrance

Just a little east of the Fultonhaus is the Royal Building on 95 Fulton St. I love the entrance, with the two barber poles and old-school IRT sign. 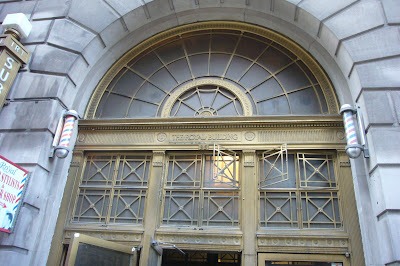 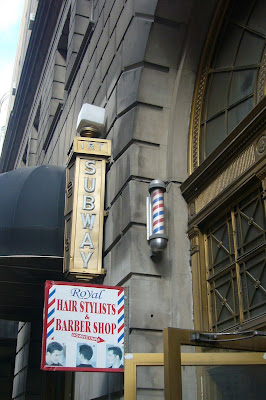 And yes -- this building once housed the Strand Annex. That space is still empty.

Posted by Grieve at 6:59 AM No comments: 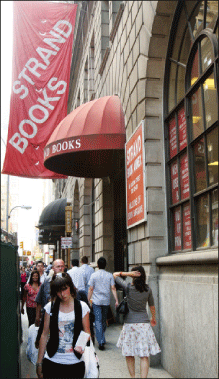 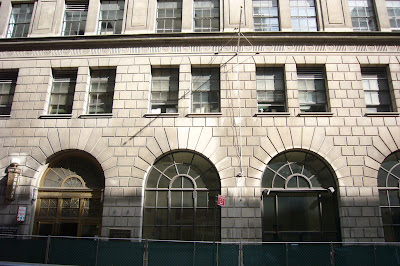 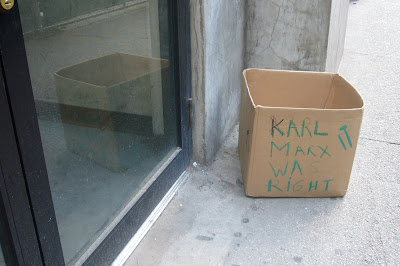 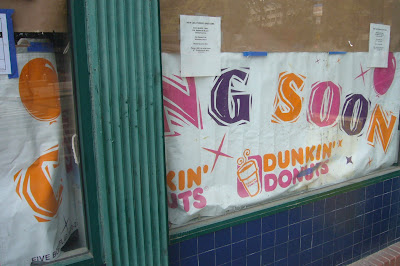 [Top Strand photo taken for Downtown Express by by Jefferson Siegel]
Posted by Grieve at 7:22 AM 2 comments: 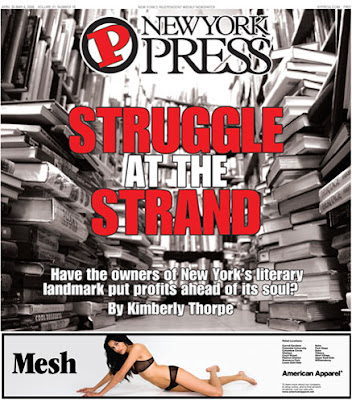 Nice piece of reporting in this week's issue of New York Press. Apparently the Strand is a horrible place to work, with allegations of racial discrimination as well as insensitive treatment of pregnant workers. Not to mention the vermin.

"It’s not the East village hipster bookstore it’s presented to be,” said one current 26-year-old male employee. “It’s a corporation, and it’s run like that."

An aside, I didn't realize that corridor along Broadway was once a haven for book stores. According to the article: "In 1927, Ben Bass opened the Strand on Fourth Avenue, which was also known as Book Row, a stretch from Union Square to Astor Place filled with 48 bookstores. Today, the Strand is the only one that remains in operation."

Another aside. Thinking about something Alex wrote at Flaming Pablum: "I fear that very soon, all the record stores in Manhattan -- big and small, corporate and independent -- will be a thing of the past. And that, my friends, is going to be a sad day. And book stores will be the next to go."

And, uh, an aside to the asides: Sure, I'm used to advertising being on Page 1, but those American Apparel ads are really annoying.