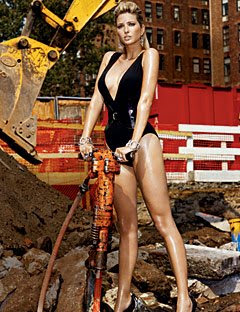 Though she is, as defunct lad magazine Stuff once put it, “hot enough to liquefy your assets” — whatever that means — she’s smart enough to do it, too. “My passion is real estate,” she says. Discussing a new Trump property in the Dominican Republic, she says, “We sold 63 estate lots for $365 million, on a price per square acre standpoint which rivals homes in Greenwich, Conn. That was done in six hours a year ago with 20 percent hard deposits.” Even though much of this is incomprehensible, what’s clear is that Ivanka means business. “I rarely go out past midnight,” she says. “I get up between 5:45 and 6 a.m. and ride my beach cruiser bike around the loop in Central Park for exercise. It's cantharric."

Oh, and earlier in the piece:

The double lariat necklace around Ivanka’s neck is from her jewelry line, aptly called the Ivanka Trump Collection, which launched in September 2007. According to Ivanka, the line is “designed off my personality and my aesthetic.” The diamond tassel she’s wearing today, for example, is “feminine but with a modern twist on old Hollywood.” It retails for $140,000 at Ivanka’s marquee store on Madison Avenue.

The good stuff comes in the sidebar, though, where we meet the real sweethearts. Like Ben Shaoul!

According to his feature:

At the tender age of 19, Ben dropped out of college in Miami to buy a building in New York and begin his rise to mini-mogul status. Since moving to New York in 1997 and setting up shop in Soho, though, he’s made enemies with East Village hipsters who accuse him of gentrifying their gritty hood. He reportedly even threatened squatters at 120 St. Mark’s Place with a sledgehammer. And he’s not afraid of getting his hands dirty in other ways, either: “I’ve unclogged toilets, laid brick, done dry wall,” says Ben. “I’ve been doing this since I was 19, which is longer than a lot of the older guys.”

Previously on EV Grieve:
Landlord accused of harassing longtime tenants
Posted by Grieve at 8:20 AM 5 comments: