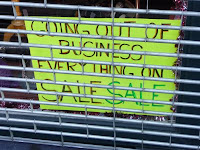 This week's issue of The Villager reports on the results of the Good Old Lower East Side survey titled, “No Go for Local Business: The Decline of the Lower East Side’s Small Business Identity.”

It's about as grim as you'd expect:

The survey found that small businesses are constantly facing the possibility of rent increases or eviction. Almost half of small business owners reported that their overhead costs were rising. Nearly one-third identified rising commercial property rents as their “greatest challenge,” and three-fourths said that their profits are not growing at a sustainable rate compared to the substantial increase in the cost of doing business on the Lower East Side.

Ninety-five percent of small business owners surveyed rent their store space, and nearly half of them hold leases of five years or less.

Redevelopment and gentrification of the Lower East Side were cited by 46 percent of business owners as directly affecting their businesses.

yeah, rents go up, but so should their revenues as the gentrification brings (a) more people and (b) people who are spending money. it goes both ways. business has to constantly adapt to its environment. raise prices, change locations, change business model, sell different things, etc...