Whatever happened to the Two Boots Restaurant? Plus: NYCHA puts up two prime storefronts on Avenue A for rent

BoweryBoogie had an update on Two Boots LES (still closed!) yesterday. Meanwhile, I never did get my arms everything that had happened with the former Two Boots Restaurant that became ReBoot at 37 Avenue A near Third Street. It had been open since 1987. There were some family issues, and I had heard that owner Doris Kornish was having problems with the landlord, the New York City Housing Authority (NYCHA). According to the ReBoot Web site:

2008 -- Lease ended in May and was not renewed by NYCHA. No negotiation or explanation was offered by NYCHA. In legal proceedings from May to September, up to four offers were made by ReBoot to renew the lease. NYCHA refused, even after instruction from a New York district judge to move forward with the lease renewal. New York City statutes state that a judge cannot force the renewal, but can strongly advise. Considerable amounts of money and time were squandered by NYCHA, although they constantly complain about being broke. With no willing communication from NYCHA, the restaurant is currently closed with all its equipment inside.

Meanwhile, there are "for rent" signs up... 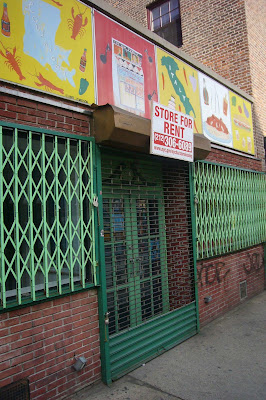 I'm curious what will happen to the illustrations...I always rather liked them... 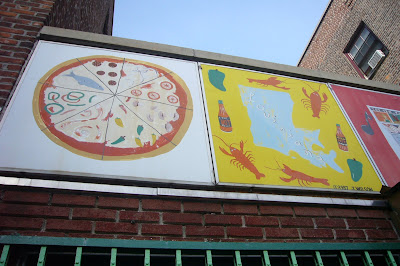 Meanwhile, the long-shuttered coffee shop at 41 Avenue A on the corner is also up for grabs. Last summer, Jeremiah reported the good news that the Essex Card Shop would be expanding into that space. Unfortunately, that deal with the NYCHA must have fallen through...there's a "for rent" sign at the old coffee spot now...the Essex Card shop is still in business (thank God). 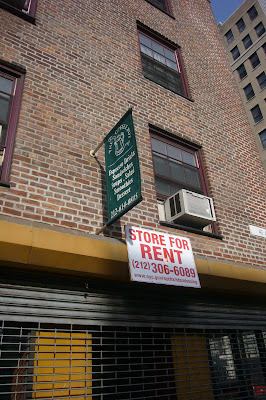 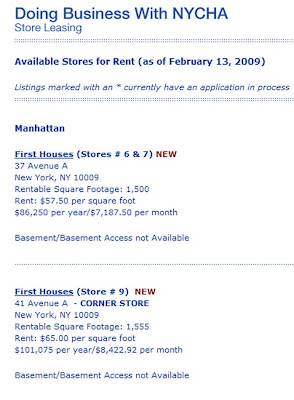 In about '95-96 I used to clean up 37 Ave A at dawn. Was the first one in there, had my own keys and did the upstairs/downstairs, where their store room was, and in 2 hours the place would be clean...till the next day.

My favorite ritual was in taking the neat flyers of various bands in the area. And on alternate days I'd do the 2 Boots pizza shop on Bleeker Street near Broadway. Wasn't bad but after 2 years I needed a change. Those early hours are murder.

what? the card shop is gone?

They're still there! The coffee shop has a the for rent sign! I'll clarify what I wrote...

Doris is a fine person, but I think she erred when she changed the Two Boots restaurant menu, removing many of the favorites that folks enjoyed there. The place used to be packed years ago, but the last times I passed by, it was practically empty.

Where the hell does NYCHA get off charging that kind of rent? As a tax payer-subsidized agency, they don't really need that money -- it's just gravy going into some unknown pockets....

I agree about the last incarnation of the menu - not good. They stopped making pizza and tried an organic/healthy menu. It was always empty after they changed. We used to wind up there regularly when there was a large-ish group that included children, which they didn't really like, but if we could take over the back area, it worked out pretty well.

One more thing - I posted an old photo that shows part of a sign that referred to this space when it was a coffee shop.

Yes, I'm with you Anon and Jill...I really wanted to like ReBoot, but was really underwhelmed...something just seemed wrong. Slow service and it was pretty empty.

I love that photo, Jill! I featured that in a post yesterday...

Doris is *not* a fine person. Nor is Phil. Divorce, business chaos, and their criminal pathology are the real reasons behind the closure of all their businesses.

Go to the NY Courts websites and look up their names, and look up their various company names (don't forget about Mo Pitkins and the Federation of East Village Artists). They are all in lawsuits. Looks like the only company that apparently hasn't been sued was the Pioneer Theatre.

A whole bunch of food suppliers have sued Phil. Meanwhile, Doris didn't pay her lawyer for the divorce case. So her lawyer has now taken her to court!

And realize that while all these many cases were going on, they decided it would be a good idea to open a bunch of other businesses, trying to draw on community goodwill.

Gentrification? Persecution? Bullshit. Divorce, business chaos, and criminal pathology are behind all this.