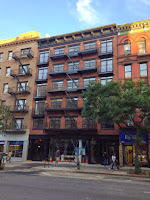 A resident who lives at 152-154 Second Ave. reports that the building's secure bike storage room in the basement was recently burglarized.

Per the resident: "All the locks [were] cut and about seven bikes are gone. You need two keys to access this room. I'm not necessarily saying it was an inside job, but there wasn't any forced entry."

The theft happened some time between Aug. 18 to Aug. 23. According to the resident, several people have access to the bike storage area, including the other tenants (there are 12 units in total), cleaning staff and super.

The resident says that the building has security cameras. To date there haven't been any updates from management about the theft, according to the resident.

The Sigmund Schwartz Gramercy Park Chapel was a funeral parlor or am I mistaken?

Living in a building that used to be a funeral parlor...didn't any of them ever see Poltergeist? Ghosts don't need keys to wreak mayhem!

The look of that building is the only thing Icon has ever done right.

@2:04pm: It must be a mistake on Icon's part; they would never have any sort of decent taste. And they're making up for it by trashing a lot of other beautiful old buildings in the area.