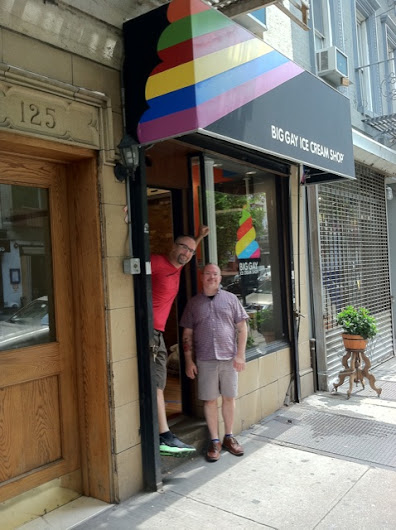 Such a sweet and touching letter.
I'll miss seeing them as I pass by.

Glad to hear they hope to open another shop and we definitely can't argue with the basis for their decision, but its still so sad.

Here's hoping NYC is back sooner than later and the city can figure out how to balance supporting SMBs and public health.

Another good, sad, reminder that have to focus on balance and absolutely can't stay shut longer than necessary.

It would be nice if the city had the same small opportunity to survive that the rest of the state does.

They even mischaracterized what happened w/ the amazing crop of restaurants that were there 2011 - 2015.

Meanwhile there are like 10 restaurants that opened on that block 2015-2020, including Miss Lily's, which is as big of a deal as the others above (unfortunately in the place of 7A, which was pretty great too).

Thanks again for your kindness and memories - y'all will be missed

All these businesses who are keeping their stores open while closing their EV locations reveal something we already knew: No students, no tourists, and no Ubers dropping off people from the Upper East Side means no business for these transient-oriented businesses. Too much retail in the EV has become theme-oriented lately (remember Empire Biscuit?) and now they are all peelin’ potatoes. Meanwhile Ralph’s and Rays Candy, where the locals get their treats, seem to be doing fine.

And I agree there was no need for them to dump on 7th Street as if it isn’t “special” anymore. Their EV location was as big a part of their brand as there ice cream truck was. If these guys aren’t careful they’ll turn into the next DF Mavens, relegated to the freezer section along with a hundred other brands.

"The batteries have gone a bit dim on that street. The empty storefronts (kept vacant by landlords working tax breaks) that plague the city have settled in."

This is one of the issues never addressed by the CC who propose minor tweaking of the tax code and tax credits to save small businesses. While I acknowledge the issue of NYC over regulation as being part of the problem, the true solution here is the passage of the SBJSA which has been bottled up in the CC and not bought up for a vote for what, 20 years now, by a very friendly REBNY CC. And the SBJSA is NOT commercial rent control, a REBNY talking point that is always used against it.

The crumbling infrastructure is also an issue for our local small businesses. That strip got flooded twice in recent months due to the water main breaks. Meanwhile up on Avenue A, Tompkins Square Bagels had to close because of a gas issue and had to seek press to get Con Ed and the Department of Buildings to address the issue.

batteries dim my a**, ray's is right around the corner and where there's vacant space there's hope for cheaper rent and wild new stuff!

No need to shit on 7th Street as you leave...

AND Ray's has superior ice cream too. IMHO.

I will miss having them there, they were good neighbors and a fun presence in the neighborhood, and I wish them all the luck in the world!

RE: "kept vacant by landlords working tax breaks"
This is a complete myth that refuses to die. The only tax breaks landlords have is they can deduct operating expenses from profit like any other business.
https://www.westsiderag.com/2019/03/21/the-answer-column-do-landlords-get-tax-breaks-for-vacant-retail-space

What about the new taco place and the new vegan/nut free bakery? Both very recent additions... his argument that there are no more food establishments rings hollow.

I'm really going to miss the shop, but 7th Street is a gem and keeps on Rocking. Ho Foods is fantastic, Ladybird is a hit, 787 Coffee is doing well from what i've seen, Slurp Shop is literally around the corner, Shinn East opened just this year.

SEVENTH STREET STILL HAS THE MOJO!

Re: Edmund Dunn
Big Gay Ice Cream closing in the EV has nothing to do with their landlord, since there is a moratorium on commercial evictions. They simply cannot make a profit with the endless indoor closure and the radically reduced foot traffic.

I've met them. They are such a loving, sweet and enterprising couple. I am sad this location closed, but I will visit the others. Best of luck to them. Our neighborhood has gone through so much loss and change :(

I reluctantly lived on UES when I moved from home borough of Queens back in 1993. It was then and probably still is less expensive, rent-wise, than EV... but dull aside from the sort of bro-tastic bars that have trickled downtown... Oh well.

Part of it depends on the landlords insurance, corporation type, filings, holdings etc. but this is exactly what they do. The interest of commercial landlords and property management companies is directly averse to businesses. Those store sizes were built years ago to sell staple goods and the rent raise has exceeded inflation at an unobtainable scale in order to cover all costs and pay any salaries.

I wonder if they considered creating a sliding window at the front and serving the customers through the window so they wouldn’t enter the shop. It makes more sense to operate a high volume ice cream shop this way. There was oftentimes a cluster of people inside waiting for their ice cream, and then they had to get by each other to squeeze out the door. That simple tweak could have kept this place operational. We have had such a mild winter and everyone is craving treats now.

Saying "this is exactly what they do" means nothing. Be specific. There are no "tax breaks" specific to vacant commercial units. All businesses write off expenses from profits.

It’s a limited write off, not a tax break in addition to reimbursable under some insurance coverage due to loss of business. It’s not like every restaurant and small business owner the last 5-12 years has been hallucinating undesirable, unsustainable circumstances. Many landlords also won’t let anyone sign a commercial lease for their 350sqft spaced unless the tenant takes on 15+% of the property tax increase after the start of the lease date, which is variable parameter. This happens even when small business owners take up 1% of the rentable square footage in a mixed residential/commercial space. I’m sure you’re passionately in love with the tax code, norms and economic circumstances but go talk to 300 restaurant owners and get back to me. Let me know when your place opens up! -Winn

RE: W "under some insurance coverage due to loss of business"
First of all this has nothing to do with the tax code. I am not aware of any insurance policy that covers loss of income due to your failure to rent. Losses of income are usually due to fire. etc.

RE: W 4:25 "The interest of commercial landlords and property management companies is directly averse to businesses"
Completely wrong. Every landlord wants their commercial tenant to be wildly profitable so they can charge corresponding rents. What landlord is averse to having a successful Starbucks?
Its NYS and NYC bureaucracies that are directly averse to business.
https://www.newsbreak.com/news/2105368319269/bureaucrats-killing-nycs-restaurants-with-arbitrary-outdoor-dining-rules