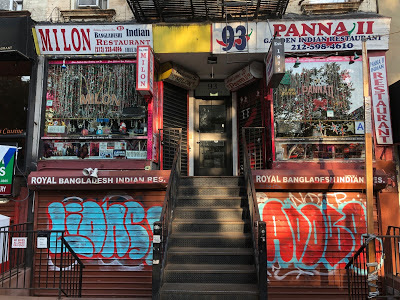 When one door closes...
This is great news!

Finally, some good news. I have so missed walking by those windows on my way to Dual, and seen them dark and cheerless instead of light-filled to the point of happy insanity.

Great news! I also look forward to walking up the stairs without having to make a choice. It was always so stressful!

well there goes any hope of Milon coming back.

great news! And now the greeters/door men don't have to compete for customers anymore (which was always a funny spectacle though).
I wish Panna II continued success once the pandemic is over and people can cram into their crazy space again :)

So glad to hear this! The lights will shine on!

I kind of think of Panna II like the EV version of Times Square. It's bright, flashy, fun to look at, but as a local you'd certainly never eat there.

That being said, I smile every time I walk by and think it's great for the neighborhood. Very happy to hear that they're expanding and we won't have another empty store front!

Yes LOUD BLARING lights while I dine. So endearing!

Notwithstanding the occasional visit by a hungry roach looking for free food, or the moldy nan, good to see this hole in the wall come back into the fold. Neither Gentrification nor Plague shall halt the insatiable demand for a proper plate of spicy curry and watered down dal. Bon Appetit !

Back in the 70s, I remember going to an Italian restaurant called Johnny's with my friend when we came into the city; they also had Christmas lights up all year round.

I sure am looking forward to eating at Panna again—or as it stands now, getting take-out.

If anything, this merger only confirms that all of the restaurants on Indian Row share the same kitchen. Shah Bag was the first on the block, and I can still taste their samosa and free cabbage with cumin seeds, basmati rice with whole cloves and cinnamon sticks, and spiced Indian tea. It was so unbelievably cheap it became the regular place to go on Friday night. Little did we know it was actually Bangladeshi food. The same extended family opened most of the remaining restaurants on the block, until an outsider decided to up the quality of the food and service and opened Mitali, which was so good they opened Mitali West on Bleecker Street. I’ll be glad to see the lights shining again.

Good news. Been going there for decades. Love those guys.