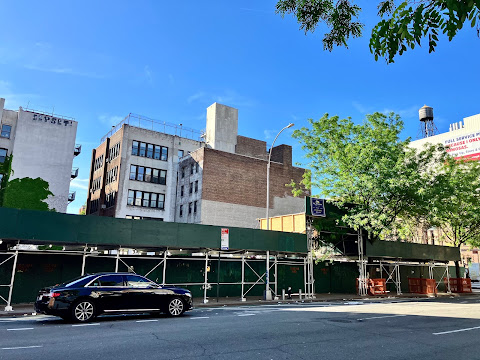 Workers have wrapped up the demolition of the three buildings that stood along 38-48 Second Ave. between Second Street and Third Street.
Unfortunately, the dumpster on the lot obscures the full view from the blogger portal on the Second Street plywood... 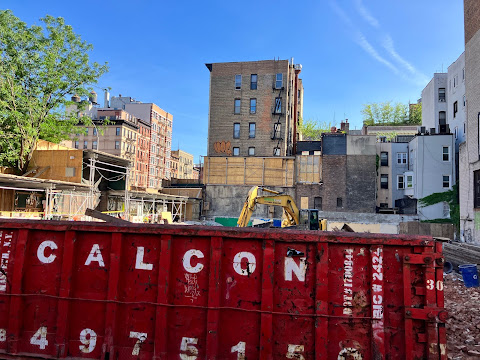 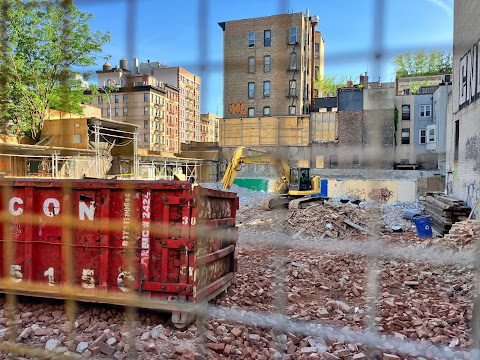 Gone are the former Church of the Nativity, the church rectory and LaSalle Annex.
As previously reported, Gemini Rosemont Development has plans for an 11-story mixed-use building (100,568 square feet in total) on this soon-to-be-empty parcel. According to the approved new building work permit, the development will feature 88 residential units (likely condos given the square footage) and 9,600 square feet for retail.
We haven't spotted any renderings out in the wild just yet.
In 2020, Gemini Rosemont bought the former La Salle annex at 38 Second Ave. and Second Street. The $14.5 million purchase of the four-story building was the third of three contiguous plots that they acquired. The Los Angeles-based commercial real estate investment company closed on 42-44 Second Ave. and 46-48 Second Ave. (the former Church of the Nativity) in March 2020 for $40 million.
Updated: Here's a better view of the empty lot via Felton Davis... Previously on EV Grieve:
• There are 8 million stories in the naked city... and this is one of them on 2nd Avenue
• A look inside the soon-to-be-demolished Church of the Nativity on 2nd Avenue
Posted by Grieve at 5:30 AM

I hope the commercial space ends up being something to complement Anthology Film Archives across the street.

Yeah right, because this is how business works.

Great more overpriced apartments for the area which very few people who have lived for years in the LES/EV can afford and more vacant ground floor commercial space that will remain mostly vacant because of the high rents the property owners will no doubt be charging.

Gemini Rosemont: People's Republic of China money with a connection to Hunter Biden -- I'm sure they'll be great neighbors.

Some background from published reports:

For the first four years of Rosemont Realty’s existence, Hunter Biden served on the company’s advisory board. Biden left the advisory board in 2014

In 2015, the Chinese company Gemini Investments, a holding company for Sino-Ocean Land, one of the largest real-estate companies in Asia, purchased a 75% interest in Rosemont Realty.

If you're trying to make a connection between the White House and companies who own property in the East Village:

Per NBC News and other outlets, the House Oversight Committee has launched an investigation into a $2 billion investment by the Saudi government into a firm formed by Jared Kushner after he left the White House last year.

This isn't about Hunter Biden. This is about a foreign entity that does not care about the damage they leave in their wake. They want to build fast and cheap and let their insurance company pick up the pieces. Look at the stop work orders on DOB to see for yourself how little they value safety. Talk to the owners of the neighboring properties to find out first hand what they are like to deal with. You will find a very alarming store to write.

this is terrible, and even more depressing after reading the comments. how does the neighborhood fight this type of thing, advice??

As one of the adjacent owners I can say they have a callous disregard for safety and the neighbors. Don’t be surprised if they destroy a building or two before they are done. Hopefully no one gets hurt.

Isn't 11 stories completely illegal there??? I hate you mayor Adam's total fking real estate hack who will keep to DOB gutless as ever