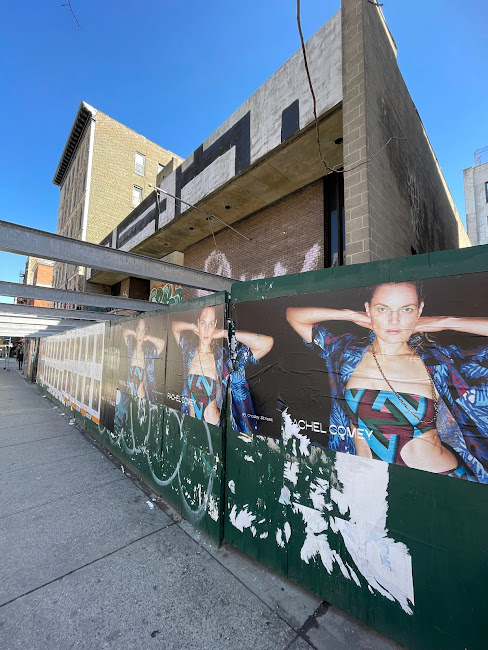 Interview by Stacie Joy
Photos by Idan Cohen
You may remember beekeeper Idan Cohen from our A Visit To Made Up There Farms. He recently was able to walk through the remains of the deconsecrated and now-closed (as of July 2015) Church of the Nativity at 44 Second Ave. between Second Street and Third Street and is sharing his photos and observations.
As previously reported, Gemini Rosemont Development has plans for an 11-story mixed-use building for a newly created parcel consisting of three buildings on this block.
I spoke to Idan about what he saw, how he feels about the pending demolition and the new development. 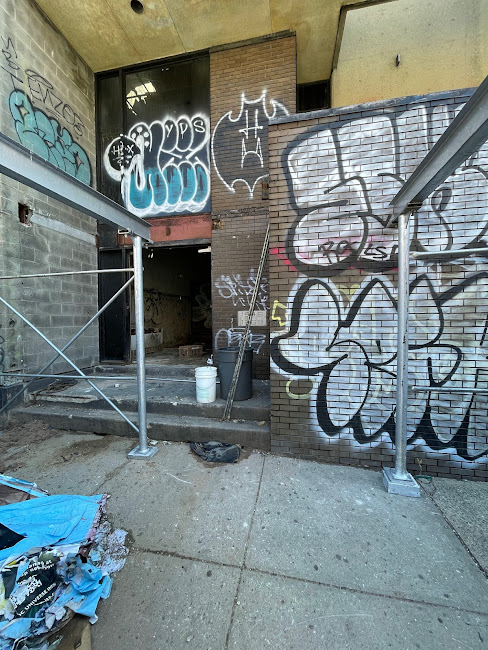 How did you come to photograph the site of the former church?
I’ve been curious to see the inside in its current state. The other week, when I was walking by, they assembled scaffolding and left the gate open, allowing me to step in and roam around.
What was your impression of being inside?
Kind of sad. To think that just a few years ago, this was a gathering space for our community and now it’s standing empty and in ruins.
Your images show a lot of water on the ground and at least some demolition work. What was the state of the property when you were there?
It’s very dilapidated, and there are holes in the ceiling, which allow water to pour in; it smells like mold and standing water. Some furniture is left, but it is wholly piled up and broken up.
Did you see anything that surprised you?
Well, the beauty of those stained glass windows was breathtaking. The way the light pours in, from both the painted glass and the ceiling holes, and the contrast between the destruction on the ground and the rays from the sky. It was all still reminiscent of what a scared space should feel like.
Had you been familiar with the church when it was still in use before it was deconsecrated? Had you ever visited before this trip?
I live a block away from the church and have always admired its brutalist and modern architecture. Through the last 10 years, I’ve seen it morph from an active church to a closed church, to a sidewalk shelter for the homeless and now a demolition and construction site.
Do you have any thoughts about the proposed 11-story mixed-use building slated for this space?
I support new construction — as long as it is not ugly. I hope larger apartments are built to attract families and children to our neighborhood. I was hoping that structure could be reused as a beautiful art gallery. It would have been an excellent addition to the East Village, similar to The Brant Foundation on Sixth Street. 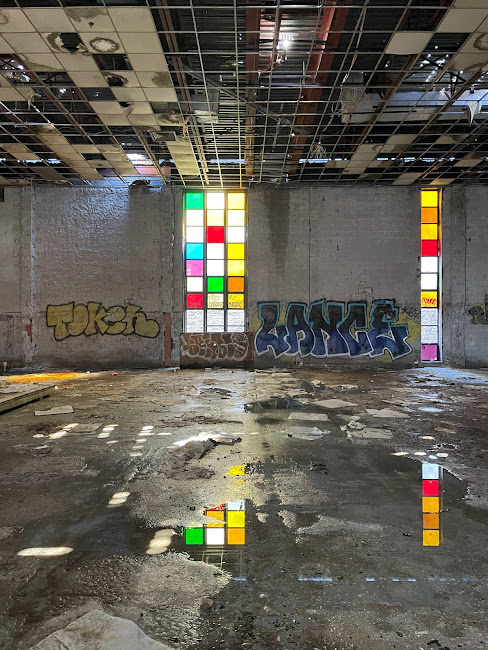 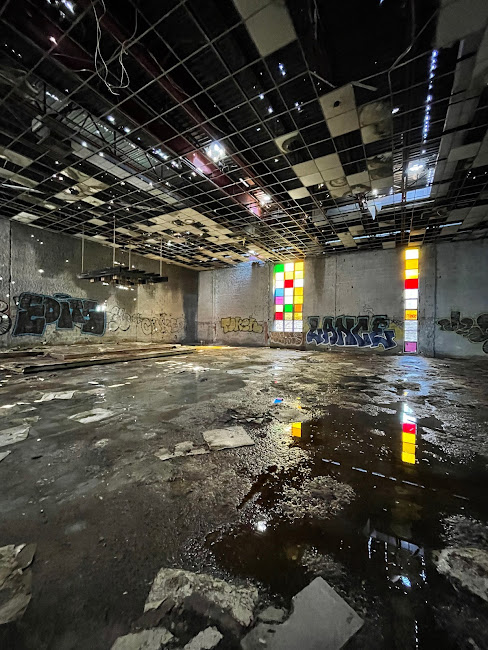 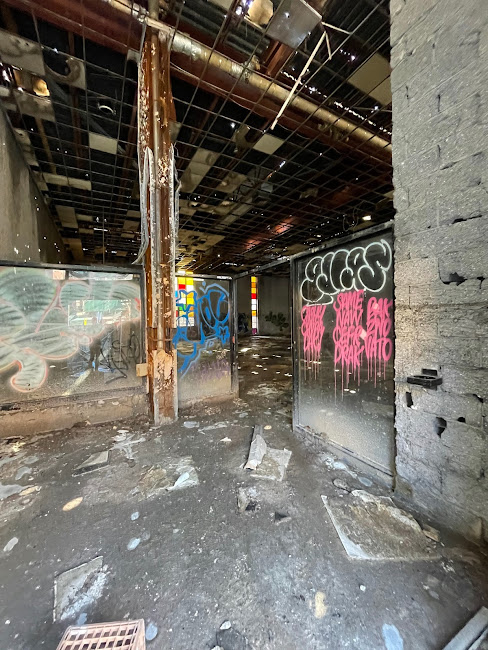 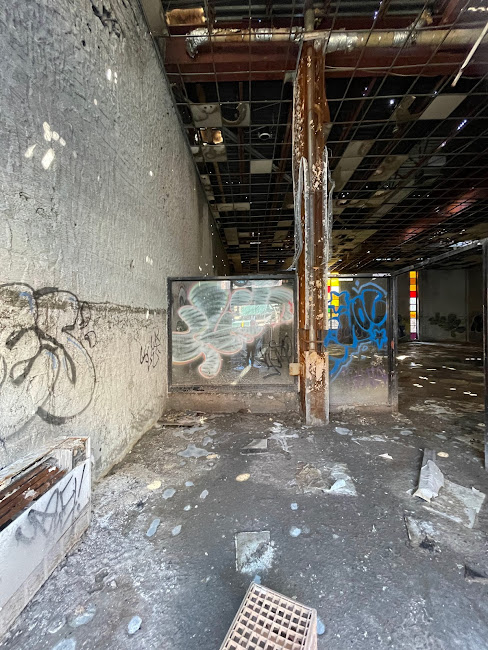 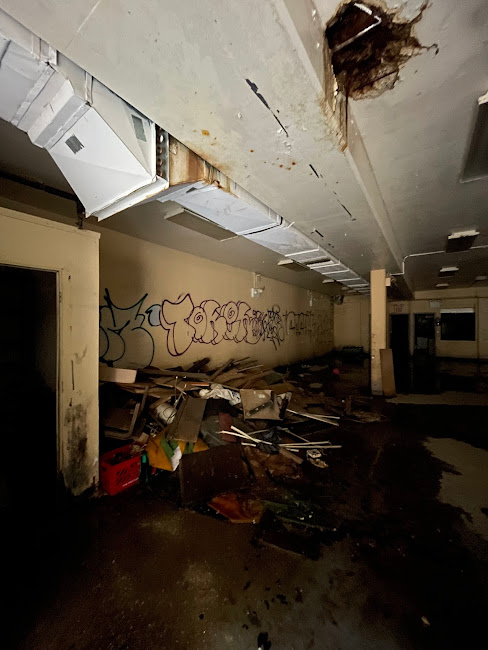 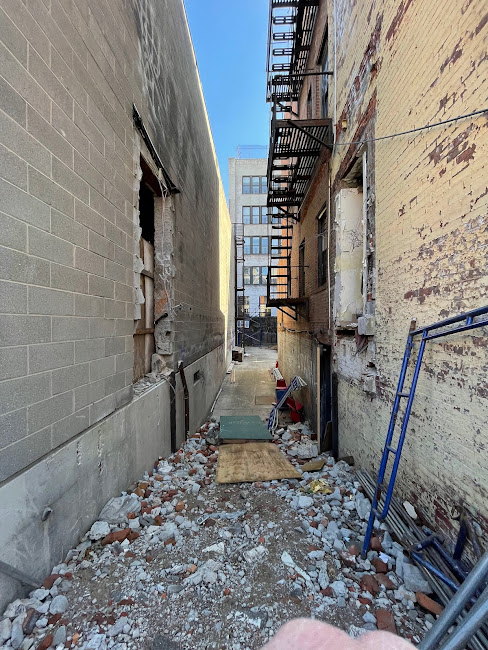 You can find some prior coverage and history of the church here. And can follow Idan on Instagram.
Posted by Grieve at 5:30 AM

The stained glass windows at Chartres Cathedral in France are "breathtaking." This, not so much.

Hey, beauty is in the eye of the beholder.

"I hope larger apartments are built to attract families and children to our neighborhood" - sad to say that is not what happens when larger apartments are built - families with kids don't want to live in areas like this. What you get are bro/frat boy pads filled with loud, obnoxious, hard-drinking partiers determined to have their fun while they live down here and then move on to more adult climes as they get older. I speak from experience - a new building across from mine opened up with four-bedroom apartments that were advertised as "great party spaces", and since it opened 8 years ago it has not seen a single family, merely an endless and interchangeable procession of late-night (or is that early morning?) beer pong-playing, yelling (even though they are two feet away from each other) morons in the garden and on the party roof. Guessing this would be a prime location for them as well.

I was never a fan of the architecture, but that first shot of the stained glass in the ruined room makes me sad. And to think of what is to come...sigh.

This church has a very long and interesting history. It was rebuild several times. It made NYC What it was.

That zoning change would have happened in 2015.

Ye olde stained glass windows are a dime a dozen. I’ll take these.

This church used to have a Madonna surrounded by candles and flowers on the front steps. That is already sorely missed and will be even more so when it is replaced with another soulless, blandly designed developers special aka Gemini Rosemont Development's 11-story condoplex, which like their ilk before them will contribute absolutely nothing to the neighborhood.

I always meant to check out the interior of this church (before it was sold then trashed by vandals) Does anyone know of any photos online anywhere?

I found the history of this place absolutely incredible - I would never have thought a building that looked like this ever existed in my neighborhood:
http://daytoninmanhattan.blogspot.com/2022/01/the-lost-church-of-nativity-46-48.html

Anyways, I did donate clothes there a few times over the years, but no pics to share.