Check out the 'Cityscapes' of Tabboo! at Karma 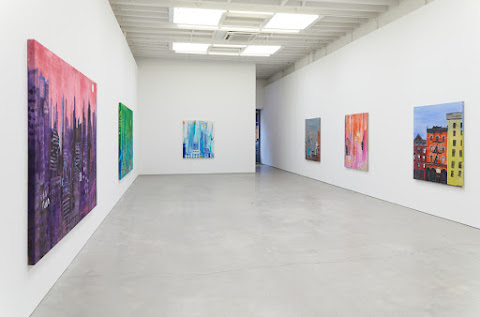 The work of longtime East Village-based artist Stephen Tashjian — aka Tabboo! — is now on display at the galleries Karma and Gordon Robichaux.
Here's more via Karma:

In these works, Tabboo!’s beloved stomping ground of New York City takes center stage, giving the viewer a chance to see the city through his eyes—a vantage imbued with possibility. The city has anchored Tabboo!’s practice across works on paper and on canvas. Rendered in quick, impressionistic gestures and a vivid palette, gray skies and iconic skyscrapers attest to its stoic beauty.

In describing his turn to the city as muse, Tabboo! has said, "I made art about what was around me, what I knew… I know my plants. I know all my tchotchkes, my puppet collection, and New York City…. So that’s my subject matter."

These sweeping cityscapes are reminiscent of the backdrops Tabboo! painted for his drag performances in the 1980s. Dramatic colorfields render the city in moments of transition, from day into night and back again. Gleaming windows are sprinkled with glitter, scattering the sun’s brilliance as it sets.

An indelible energy soaks these cityscapes, many of which depict the view from Tabboo!’s apartment windows. "I paint from my Alphabet City apartment, which I've lived in for forty years," Tabboo! explains. Here's my big fancy artist statement: I don’t have one! I just do what I do."

The work is on view at both Karma spaces on Second Street between Avenue A and Avenue B — Nos. 188 and 172. Gordon Robichaux is at 141 Union Square West.
The exhibits will be on view through April 16. The two galleries on this block are open Tuesday-Saturday from 10 a.m. to 6 p.m. Gordon Robichaux is open Friday-Sunday noon to 6 p.m. Meanwhile, Tabboo! is the subject of a Guy Trebay profile the other day at The New York Times.
An excerpt...

The irony is by no means lost on Mr. Tashjian that, while just seven years ago he was collecting disability food stamps, the art world has suddenly discovered him hidden in plain sight at age 63 ... a cadre of collectors has emerged eager to acquire one of his paintings. "I'm pushing the work harder than ever,' he said. "I'm living," he added, suddenly tearful, "for all the people who couldn't."
By that he meant countless members of his generation lost to the AIDS epidemic. "Everything before digital, there's now a push to erase," he said. "And I am insistent on not being erased."

There's a separate preview piece of the exhibits at the Times here.
Top photo via Karma
Posted by Grieve at 12:03 PM

Stephen Tashjian (aka) Tabboo! is a great artistic talent and show person. He paints the East Village as if it were Paris, with love and a constant re-discovering of its beauty.

Taboo! is an EV legend

Lush and playful work. Thanks for the tip, I'm going to check out the shows. I love the organic nature of non-digital art and very happy to see an older artist get his due.

We need more good news. The situation in Ukraine is god-awful and terrifying.