Storefront reveal at the taller 21-23 Avenue B 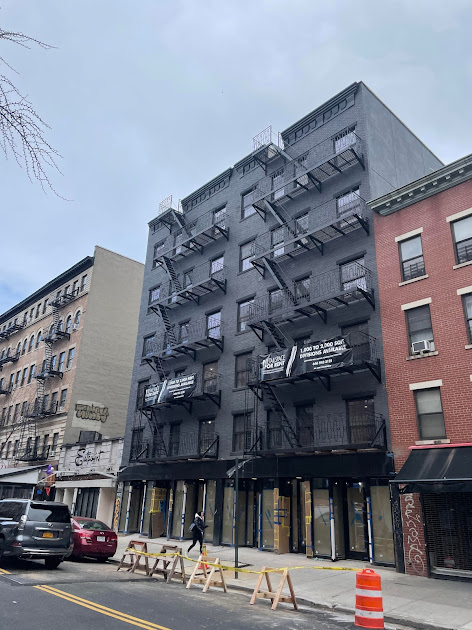 We have a new storefront reveal at 21-23 Avenue B. (Thanks to Salim for the pics!)
As previously reported, workers have been adding two new floors and combining the two four-story structures between Second Street and Third Street.
The retail spaces have been on the market via landlord Icon Realty. One slot is $12k a month, and the other asks $24k. (The larger space says "Restaurant Use Accepted. Venting in Place, Gas Line in Place.) 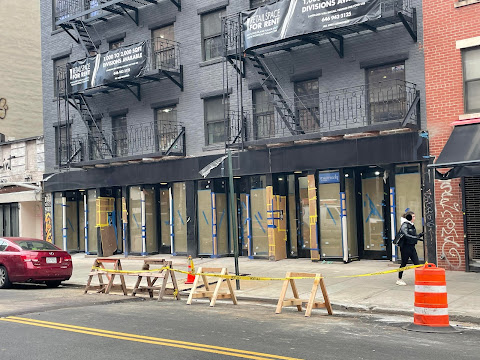 The newly created apartments upstairs will reportedly include six five-bedroom homes and eight two-bedroom units.
Posted by Grieve at 4:49 AM

Email ThisBlogThis!Share to TwitterShare to FacebookShare to Pinterest
Labels: 21-23

Six 5-bedroom "homes". Yeah, right. We all know what this will become. It's sad, really.

"The newly created apartments upstairs will reportedly include six five-bedroom frat house party pads and eight two-bedroom units." There, fixed it for you.

If you are considering leasing one of these commercial space, think twice, then a thrid time. These are ICON buidings and I for one will never support any business which inhabits one.

Bring back the pet store and beauty supply shop!!!

between this frat party building and the abhorrent Poco on the other side I’m so glad I made the decision to move out of 29 ave b three years ago, the street is like living on a frat house row in a Florida college

This kind of upzoning is great. There's many buildings in the EV where that could be done to create more housing supply relatively easily without changing the look of things.

Agreed with 435pm. This is a great expansion of the housing stock and improvement of a building without changing the character of the neighborhood. Icon may be a terrible landlord but I still hope they attract commercial tenants and wish them the best of luck.

@11:23 seriously. Wish I could move but this is practically the only hood I know. Poco gets away with murder and completely fucks up the feeling of our neighborhood every weekend.