[Updated] An uncertain future for these Stuyvesant Street businesses, including Angel's Share and Sunrise Market 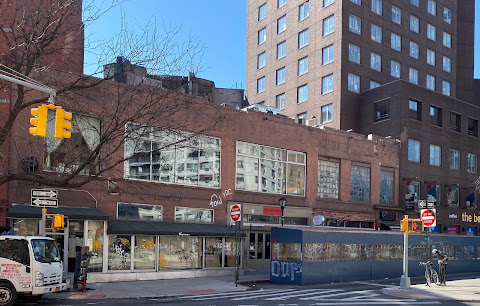 Photos by Steven
Updated 3/16: Landlord Cooper Union says the tenants have "informed us of their decision to vacate the property." The landlord also said the tenants haven't paid any rent since 2020. Read more here.
-----
As you may have heard in recent days, businesses along Stuyvesant Street between Ninth Street and Third Avenue are in danger of closing as the long-term leases here are set to expire at the end of the month.
This impacts four retail spaces — Angel's Share, Village Yokocho, Panya Bakery and Sunrise Mart.
Alex Vadukul, a correspondent for The New York Times, broke the news on Twitter the other night...

The forecast looks grim, I’m told, although there’s a slight chance some agreement may be brokered yet. The trigger for these events, apparently, is that a very old and longterm lease arrangement has finally come to its end. pic.twitter.com/wMKfHyBSd4

Other outlets, including Grub Street and Gothamist, had follow-up pieces on Friday.
Public records show that Cooper Union is the landlord here. So far, Cooper Union and the owners of the four businesses, Yoshida Restaurant Group, haven't commented, which has fueled more speculation.
There's hope for a lease renewal. Otherwise, a relocation is likely in the plans. An employee at Angel's Share told this to Gothamist:

A bartender there sounded somewhat optimistic, telling Gothamist of the current situation, "it's between the owner and the landlord, but we're either relocating or staying here."

Another bartender told this to Grub Street: "There's an 85 percent chance that we close. It's okay, though, because we're gonna relocate."
As for speculation, an employee at Panya said Friday that Cooper Union had plans for a new building on the site (there is nothing in Department of Building records that shows permits for new construction) and that they'd be moving.
Adjacent to this space is the 29 3rd Avenue Student Residence Hall, which offers apartment-style housing for 170-plus Cooper Union students. The 15-story building opened in 1992. Retail tenants here include the Bean and Sunrise Mart. (In 2011, Cooper Union and tenant St. Mark's Bookshop were in a high-profile rent negotiation. The school eventually reduced the rent by $2,500 per month and forgave $7,000 in debt. The bookstore finally had to move to a smaller shop before closing in 2016.) 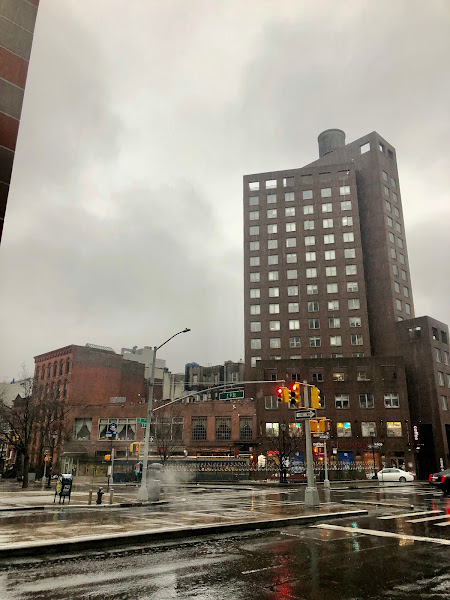 Coincidentally (or not) on Friday, workers were seen clearing out the former Autre Kyo Ya space (and, from 1989-2009, the diner Around the Clock) at 10 Stuyvesant St. 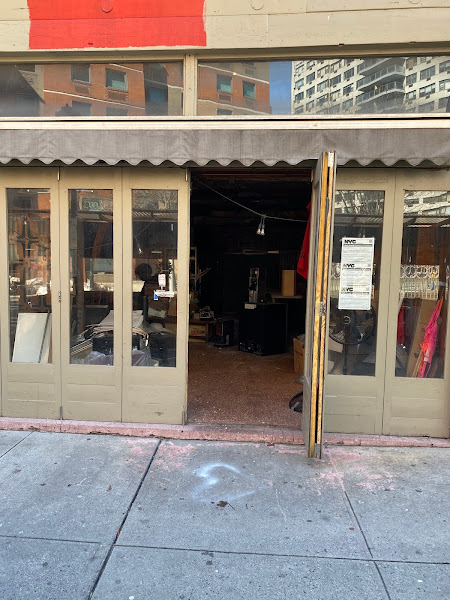 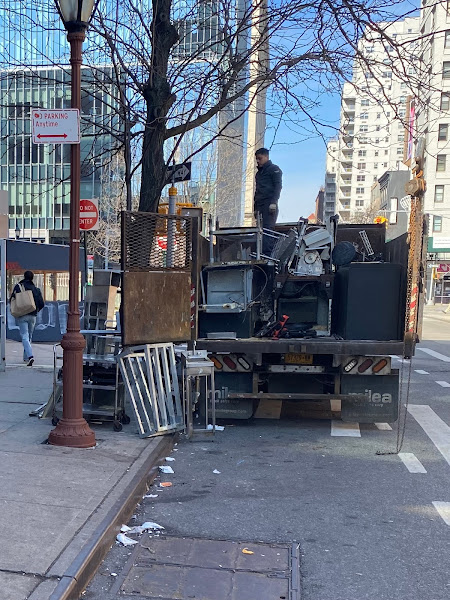 This corridor has been called a micro-center of Japanese culture. Angel's Share, the speakeasy-style bar, opened here in 1994, with Panya arriving next door in the same year. Sunrise Mart debuted in 1995. There are now also locations in Soho, Midtown and Brooklyn.
We hope to learn more about what's happening here soon.
Posted by Grieve at 5:01 AM

I remember when that dorm location was Kamenstein's; the place for paints and hardware supplies. I purchased all my supplies from them, way back when....

Cooper Union, not an organization to shy away from progress or the bigger bucks. Can't blame them, but don't really think that they're all that great, either.

I'm really sad about Sunrise Mart closing—not that I didn't see the writing on the wall, though, since I've started making my own kamikaze dressing.

I actually didn't know of the closing until reading this blog post, though; I wonder what kind of Midtown-South-style midrise is going to replace the old Kaminstein's building now!

It would be a shame if we lost those businesses. I shop at Sunrise Mart all the time.

I love and rely on Sunrise Mart! Best hope: the landlord relents and they stay where they are. Second best: they're able to relocate nearby.

Cooper Union, not an organization to shy away from progress or the bigger bucks. Can't blame them, but don't really think that they're all that great, either.

When anyone opines about Cooper Union, I like go ask them: "Did you go there?" True, a lot of their decisions in past years have been borderline-disturbing—I remember when the gas station on 4th street had just become B Bar and neighbor Carl Hultberg put a sign in his window: "O Cooper Union: How Can You Do This To Your Neighborhood?" (Now we're mourning the loss of that bar and that building!)

Fortunately, Sunrise Mart has other locations, as well as plans to move. The one thing they have that I can't live without is their Kamikaze Dressing—which fortunately is not that difficult to make:

I have not been there in a while, but I am going to miss the original Kyo Ya on 7th Street. It was a wonderful restaurant.

I've always enjoyed shopping at Sunrise Mart but occasionally disappointed when I couldn't rely on favorite items being in stock.
I finally succumbed and stepped into H-Mart just across the way on 3rd Ave. That place is KILLER and stiff competition.

What a pity. That little stretch has some real character. Cooper Union, WYD?

H-Mart is strong but its specialty is Korean, not Japanese. Obviously that's not all they stock but sometimes you want a Japanese mart in particular.

I still feel it was a shame when we lost Kamenstein's!

are the air rights sold on that lot?

Cooper union understands the neighborhood, and we are not it. We just live here. Soon you'll need a pass to use the sidewalks - the app delivery people will always come first.

Me too. I really hope it stays!

Let's hope they can strike a deal! All of these businesses are tops -- Sunrise Mart is great for Japanese groceries, Pan Ya for curry puffs/bread and Angel's Share is one of the best cocktail bars in the city. It's hard to imagine Angel's Share without having to walk through Village Yokocho... hopefully they can keep the same location for another ~30 years (what a run!)

Unthinkable to lose this particular cluster of businesses at this spot. Even if they just relocate, a part of my NY heart dies.

The retail space, standing at the gateway to the EV effectively, is probably super valuable on the open market. I'll be shocked if a lease renewal deal is worked out.

and then Cooper Union sold the property to B Bar owner for a song... who's now turned around and sold it for waaaaay more.
I don't think Cooper Union has ever been that smart in their real estate deals the past 30 years.

Who is the head of this real estate group? This has to stop, everything of worth is being forced out of the neighborhood
Someone pls post any info you have, I want to contact them

Walked by today and Japanese restaurant Sharaku, directly adjacent to these four at 14 Stuyvesant appears closed and gutted after about 25 years in business. Curious if ownership was the same.

This is the death of the east village neighborhood, becoming a district that will have no pulse to it.

Oh No-o-o-o-o. Sunrise Mart closing. Another nail in the coffin of the East Village. Part of the charm of the East Village (which made it so popular to all the arrivistes) was the abundance of small businesses. And one by one those long-term commercial leases run out and landlords jump on the greed bandwagon. Five years forward we'll be looking like Murray Hill South.

No one is lamenting the possible loss of Village Yokocho? It's all about Angel Share? IMHO Yokocho is the top izakaya in the East Village, hands-down, in terms of both the food and the variety of items served, to say nothing of having the best, most spacious interior, where you don't feel like your neighbor at the next table could reach over and snag one of your squid legs. Cooper Union, if you do this, you blow.

For what it's worth, Kaminstein's Hardware was the original owner of this land, not Cooper Union, and took its sweet time selling out. I honestly don't know if they're still the owner of the land, or if it's been transferred to Cooper—who also owns the land the Chrysler Building is built on. (NYU doesn't own everything!)

I too miss Kaminstein's, but it is what it is.

These closures are heart-breaking; these small businesses have been beloved venues in the East Village. I've read that this developments have been activated because Cooper Union wants to return to the glory days of its "no-tuition" glory-days. I know about those golden years: Both my father and my uncle would have been unable to attend such a good college without that policy.