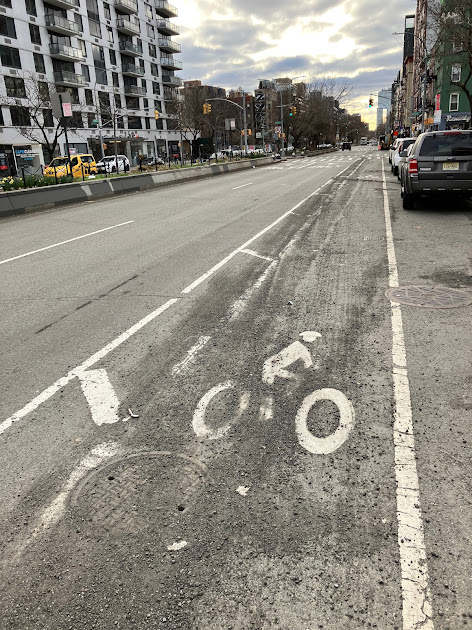 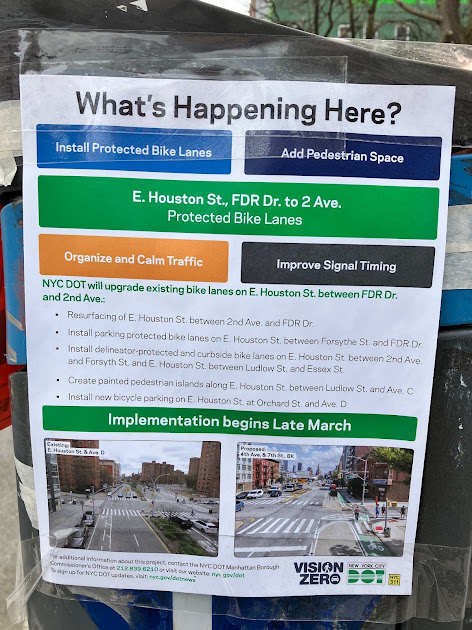 Workers last week milled the eastbound lanes of Houston between Second Avenue and Avenue A. The crew will continue on toward the FDR starting this evening, per the posted warnings... Here's what is happening with the improvements in the days/weeks ahead:
Plans for protected bike lanes along this corridor date to the fall of 2020 ... and put into place to provide cyclists a safer passage on city streets with the closure of the East River Park Greenway until 2026.
This Houston Street work comes four months after the $1.45-billion East Side Coastal Resiliency (ESCR) project shut down bike access along the East River starting at Montgomery Street.
The city installed new bike lanes for Avenue C late last summer.
Posted by Grieve at 5:02 AM

Great, protected bike lanes make it harder for double parking to block the bike lane. Though there's tons of cars on ave C every day that park in the bike lane but never get a ticket. Needs more vigilante reporting.

It would be great for lanes to be expanded westward beyond 2nd Ave.

...and now we need to charge excise taxes on bikes so they are paying their fair share. And demand all riders have insurance.

And what about all those pedestrians freely walking the sidewalks without any consideration for the cost of maintenance, simply appalling :(