Cooper Union: Longtime Stuyvesant Street businesses 'informed us of their decision to vacate the property' 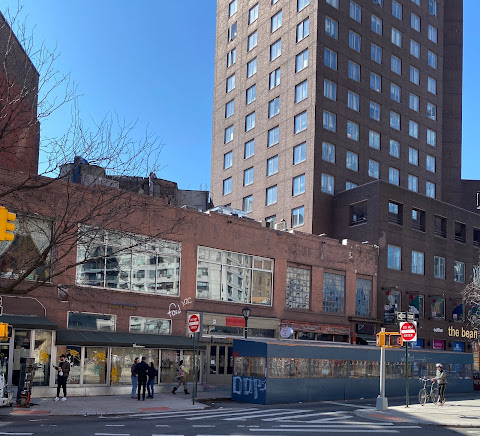 Photo from March 11 by Steven
Cooper Union, the landlord of four popular businesses along Stuyvesant Street between Ninth Street and Third Avenue, says the tenants have "informed us of their decision to vacate the property." The landlord also said the tenants haven't paid any rent since 2020.
Yesterday afternoon, school officials responded to reports that the tenants — Angel's Share, Village Yokocho, Panya Bakery and Sunrise Mart, all operated by Yoshida Restaurant Group — were involved in a rent dispute, that the long-term leases were set to expire at the end of the month.
The story began this past Wednesday night when a server at Village Yokocho told a customer, and New York Times correspondent Alex Vadukul, they were closing "due to [a] massive rent hike." Vadukul, a gifted reporter, recounted what he heard from staff in a series of tweets that sparked several follow-up stories, including at Grub Street and Gothamist (and EVG).
In a statement to EVG, a Cooper Union spokesperson provided the following:

Unfortunately, the tenant informed us of their decision to vacate the property. They were not asked to move out, despite the fact that they haven't paid any rent since 2020.
Additionally, we offer clarification of a few facts here:
• The formula for calculating rent on these properties has been in place for some 30 years and has never been changed.
• While the tenants of these properties have not made any rent payments since 2020, they have continued operations in these spaces. We have repeatedly sought to arrive at a good-faith agreement.
• Lastly, for context, we should note that The Cooper Union is midway through a 10-year plan to return to full-tuition scholarships for all undergraduates. These properties help to generate revenue for student scholarships.

It's not immediately clear if any of the businesses will relocate (several workers said this in previous reports). A bartender told this to Grub Street's Chris Crowley late last week: "There's an 85 percent chance that we close. It's okay, though, because we're gonna relocate."
Yoshida Restaurant Group has not publically commented on future plans for these businesses.
This corridor has been called a micro-center of Japanese culture. Angel's Share, the speakeasy-style bar, opened here in 1994, with Panya arriving next door in the same year. Sunrise Mart debuted in 1995. There are now also locations in Soho, Midtown and Brooklyn.
Cooper Union did not respond to a follow-up email about what might be next for these retail spaces.
Updated 3/17: The Cooper Union spokesperson said that the school had no new plans for a new building here.
Posted by Grieve at 5:05 AM

That 1/2 a block is jumping at night, lines outside for some of the bars there. Feel bad for people who live above and across the street, some of the lines are underage and loud. They would try to have someone control them but it wasnt consistent. Hope Sharaku isnt part of this leaving

I really hope they can come to some sort of agreement here. This is such an interesting, fun and vibrant little piece of the neighborhood.

I agree, this stretch does get loud... but it's been that way forever. Anyone who moves into an apartment above these businesses should certainly know what they're getting themselves into. 5 streets converge there it's never going to be quiet.

I live in the neighborhood and walk by these businesses all the time. That is a complete and total lie. Any lines that may exist for Angel’s Share form inside the building just outside the door to the bar which is inside Village Yokocho. Also, no one “lives above” these places. There is a dorm for Cooper Union that is separate and set back from these properties not above them. Stop making stuff up.

Sharaku closed quite some time ago.

I came here to say what emanon2000 said. Also, MrNiceGuy, there are no apartments above this 2-story building.

Still guessing that two-story stretch will vanish and another lumbering featureless behemoth will take its place.

Why haven't they paid their rent?

Sharaku was of a different sort. More for the people who didn't really know better about Japanese cuisine. Not that there's anything wrong with that. But I feel it always benefitted from its proximity to the very legit Pan-ya, Yokocho, Hasaki, Soba-ya, etc.

A lot of mom-and-pop small businesses did not pay rent during COVID. Usually, they would work out a payment plan with their landlord in order to avoid lengthy legal action. It sounded like Cooper Union wanted to negotiate new leases, but the rent hike was probably way too high vs rent rates from 30 years ago. Even if they wanted to stay, the thought of having to pay back rent + new market rates would be unappetizing to say the least.

I miss the Around the Clock Cafe. Anyone else remember that place on this little strip?

I love how 'urno' completely told on himself that he doesn't live here and knows nothing about this corner as it is today. Friend, if you moved to the suburbs because you hate noise - stop haunting East Village blogs! Those of us who really do choose to live here may have feelings about noise on some streets, but this particular intersection?! Honestly.

Please stay in this neighborhood. Relocated or not.

That space isn’t empty-there are workers in there who told me it was going to reopen next week as some kind of dollar super store.

I do! Around the Clock was a great place at any hour.

I believe the long lines are for 212 Hisae’s which has really cheap drinks and is just down the block.

I don’t agree that Sharaku was for people who don’t really know about Japanese food. Lots of Japanese used to eat there, but it did seem to slip in quality and service the past few years. I’m also not sure that it’s closed permanently as opposed to temporarily. Most or all of these Japanese businesses have had trouble finding enough staff to re-open full time. Many Japanese restaurant workers moved back to Japan earlier during the pandemic and have not come back.