A 'retail opportunity' at the former Whitehouse Hotel on the Bowery 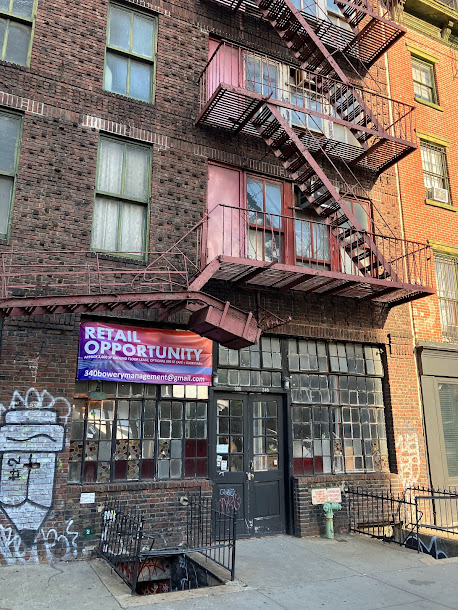 An interesting development at 340 Bowery between Great Jones and Bond ... a "retail opportunity" banner now hangs by the front door of the former Whitehouse Hotel, the last of the flophouses on the Bowery... 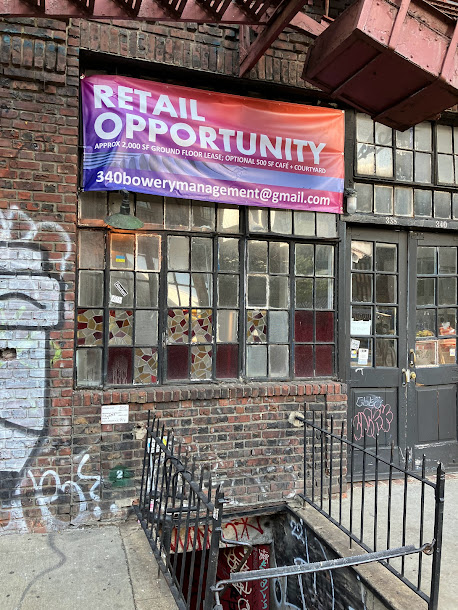 Management is offering 2,000 square feet on the ground floor, with an "optional 500 SF cafe + courtyard."
There is a lot of history with the Whitehouse, a four-story building erected in 1916 that has served as a single-room occupancy hotel. A handful of residents remain here, and their presence has reportedly hindered any new building plans.
We hadn't heard anything about the building since late 2018, when Alex Vadukul profiled the artist Sir Shadow, one of the six remaining residents of the Whitehouse, in a feature at The New York Times.
As Vadukul noted: "A few residents have died, and buyouts have lured away others. The men who remain in the flophouse have refused these deals. The Whitehouse Hotel's future appears to now hinge on a grim but simple waiting game."
At this point, there aren't any new permits for development. So perhaps retail is the solution for now to generate revenue for the property.
Some recent history: The building was spruced up in 2011 to appeal to the thrill-seeking backpacking set. (For $45, guests could stay in a tiny room where the walls don't go up to the ceiling... while the long-term residents remained on another floor.)
However, the Whitehouse stopped accepting reservations in September 2014. Plans were previously filed via Sam Chang in 2014 to "convert 4-story lodging house into a 9-story hotel," according to DOB records. Those plans never materialized. The Renatus Group now owns the property.
Posted by Grieve at 4:59 AM

"I won't go there anymore" the story of the old bouwerie

Wow. If the walls could sing. Imagine all the Trauma and Sadness that has gone on in that place over the decades.

Yet another retail opportunity in the LES retail wasteland.

Thank you for providing the 2018 link to the Times about him, it was faskinatin.

Hope those few remaining guys hang in there for a long, long time.....

They're all there in Lionel Rogosin's one-of-a-kind docu-drama of 1956: "On the Bowery." Available on DVD or to stream online. And yes, that is the Third Avenue elevated train running by Cooper Union. It was taken down soon after the film was made.