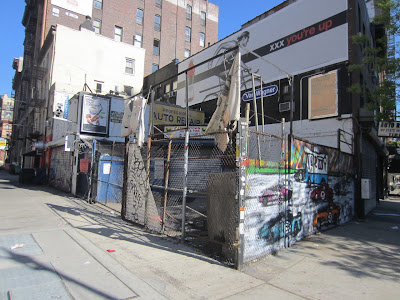 After sitting vacant for nearly two years, it looks as if the former Downtown Auto & Tire space on Great Jones and the Bowery has a new (temporary) tenant... 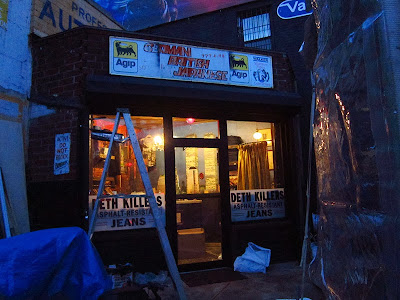 The Brooklyn-based motorcycle club launched the Deth Killers of Bushwick brand in 2002... and 348 Bowery here will serve as a pop-up shop for their specialty $250 jeans. The Deth Killers say the shop will be open until at least September.

Here's more from the Times, who reported on this last Thursday:

The cultish label emerged out of a tight-knit motorcycle club in Brooklyn by the same name, limits itself to minuscule and sporadic production runs, and sells in only a few boutiques around the country.

In recent years, the label’s signature asphalt-resistant biker jeans, woven with Kevlar to combat road rash, have become a word-of-mouth phenomenon among grease-spattered gearheads and celebrities like Justin Theroux and Josh Hutcherson.

They opened last night with some kind of Fashion Week party that featured a wheelie machine and a punching competition.

The space hit the market in May 2010 ... In July 2010, a few people were hoping to open the first New York branch of Segafredo Zanetti Espresso Café, the Italian-style coffee bar, on this spot. They went before CB2, who rejected the proposal, which included a patio with a retractable roof with soundproofing ... and sound-resistant sliding doors. (You can read our coverage of the meeting here.)

Downtown Auto & Tire has left the Bowery
Posted by Grieve at 5:00 AM 6 comments: