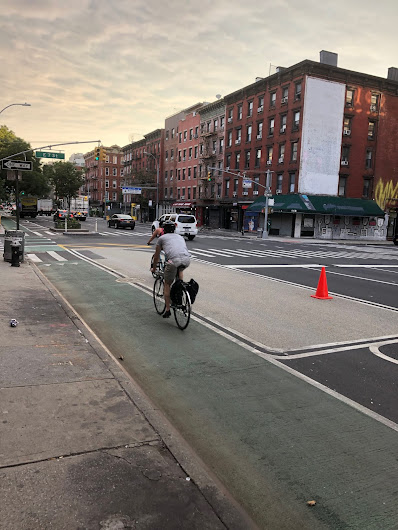 To address the rising death toll of cyclists on city streets this year (17 so far vs. 10 all of last year), Mayor de Blasio yesterday released details on a five-year, $58.4 million plan that aims to combine design, enforcement, legislation, policy and education to make the city safer for all street users.

Here's Gothamist with the key details:

Dubbed the "Green Wave Bicycle Plan," the 24-page blueprint calls for the addition of 30 miles of new protected bike lanes each year, up from the current rate of about 20. The Department of Transportation will also begin implementing traffic calming treatments at 50 of the city's most dangerous intersections, while the NYPD's three-week campaign targeting dangerous drivers will be extended indefinitely.

Vision Zero never started with the idea that we'd save only a few lives — it's about saving EVERY life. And a citywide network of protected bike lanes will bring us closer to that goal. pic.twitter.com/UtLuYE99RK

• Under the plan, the NYPD will ramp up enforcement at the 100 most crash-prone intersections and target enforcement on highest risk activities: speeding, failing to yield, blocking bike lanes, oversized trucks/trucks off route.
• Maintain continuous citywide implementation of “Operation Bicycle Safe Passage” initiative – extending elevated enforcement of blocked bike lanes and hazardous driving violations. Since implementation of Operation Bicycle Safe Passage, NYPD has doubled enforcement of cars parked in bicycle lanes and issued more than 8,600 summons in the first three weeks of July.
• Specialized units and precincts will increase enforcement against oversized and off-route trucks.
• The NYPD also announced that supervisors would respond to collision sites to determine if the right-of-way laws should be applied — and that it would also discontinue its practice of ticketing cyclists at the site of fatal cyclist crashes.
• NYPD supports new and emerging technology for automated enforcement.

The plan doesn't mention if they'll be an educational component to curb the NYPD's tradition of blaming the victim for his or her own death on the streets, as we saw in the case of Kelly Hurley on First Avenue at Ninth Street in 2017. A detective came to the conclusion that she didn't stop in time and "slipped" under a truck — a truck failing to yield and making an illegal left turn across four lanes of traffic.

You can find plenty more reaction and analysis of "Green Wave" over at Streetsblog — here and here, for starters.