Whatever happened to the former Heathers space on 13th Street? 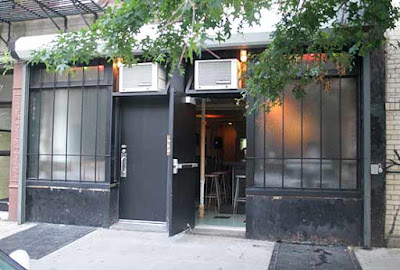 Two retail spaces recently arrived on the market at 506 E. 13th St. between Avenue A and Avenue B... 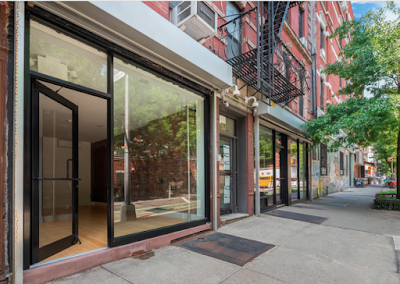 The larger of these spaces (the storefront on the west) was home for eight years (under two different owners) to Heathers, a bar-lounge hotspot of sorts that attracted plenty of press during its time here.

Heather Millstone opened Heathers in 2005, and the bar quickly became a lightning rod for noise complaints. (The Times had a lengthy article in January 2007 about the ongoing noise issues between the bar and neighbors.) There was also plenty of CB3-related drama for Heathers with its liquor license in the fall of 2011.

New owners took over the bar during the summer of 2012 ... and the place abruptly closed in October 2013.

Post Heathers, the space has been on and off the market these past five years. I can't recall any business being in the space during that time.
Posted by Grieve at 4:10 AM 2 comments:

Email ThisBlogThis!Share to TwitterShare to FacebookShare to Pinterest
Labels: for rent, Heathers 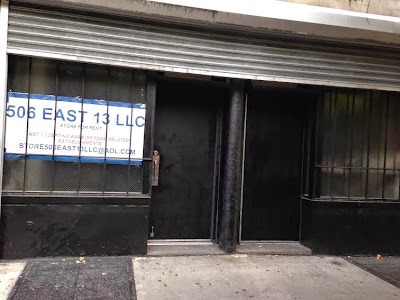 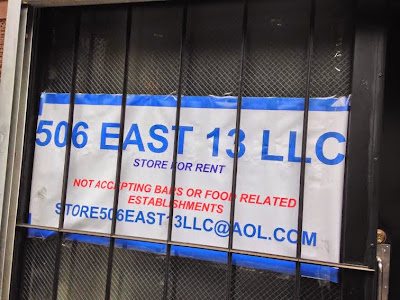 We didn't spot a listing online. Looks like you'll have to send an email to the landlord if you have an interest in the space.
Posted by Grieve at 5:00 AM 3 comments:

That's it for Heathers ... for now 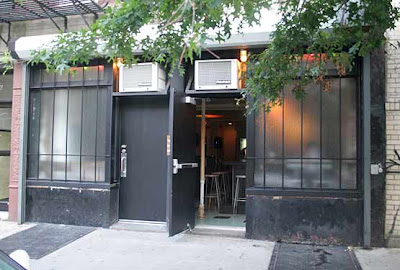 Word on East 13th Street was that Heathers would close at the beginning of December. However, that closing came earlier than expected, as Grub Street first reported late yesterday afternoon. Per Grub Street, "the locks have been changed illegally."

Ray Lemoine and Michael Herman took over the bar just east of Avenue A during the summer of 2012.

Back to Grub Street:

Lemoine and Herman say they were gradually being pushed out of the bar, which came with a history of complaints and controversy. Initially, a cash settlement with the landlord established an end date of December 1, 2013 for the East 13th Street space.

Heather Millstone opened Heathers in 2005 ... and the bar quickly became a lightning rod for noise complaints. (The Times had a lengthy article in January 2007 about the ongoing noise issues between the bar and neighbors.) You can read more about the bar's CB3 issues here.

We asked Lemoine a few questions via email last night about what's next.

What are your feelings about how things came to a rather abrupt end here?

Sad. Staff is sad, customers are sad. But I'm kind of happy I can stop drinking for a bit. Would have a proper send off.

Are you looking to relocate in the East Village?

We have a few great options right nearby and are looking to close a deal ASAP. We love the North East Village.

What's your assessment of the East Village nightlife scene these days?

I like many of the old bars. I love Lit for its club scene. But there aren't many cool new spots despite all the blogs telling you about these cool new spots. ACME is great, but it's in NOHO. Cocktail bars and $9 sandwich shops should be banned. Nightlife is pretty dead in the East Village in terms of, say, hearing a great DJ and dancing and not paying $12 for a drink. I miss The Hole. I mean, now that Heathers is closed, there isn't even a lesbian/heroin rock bar left in the East Village (frown face).
Posted by Grieve at 7:05 AM 18 comments:

Yesterday, we noted the item about an Election Night Party at Heathers on East 13th Street. As a follow-up, the bar just east of Avenue A has been sold. We saw the listing for the space dating back to the spring... apparently the sale quietly went through late in the summer...

LeMoine said they kept the news of the sale pretty low-key. As for changes?

"We intend to keep Heathers the same," he said.

Owner Heather Millstone opened Heathers in 2005 ... and the bar quickly became a lightning rod for noise complaints. (The Times had a lengthy article in January 2007 about the ongoing noise issues between the bar and neighbors.) You can read more about the bar's recent CB3 issues here.
Posted by Grieve at 6:36 AM 5 comments: 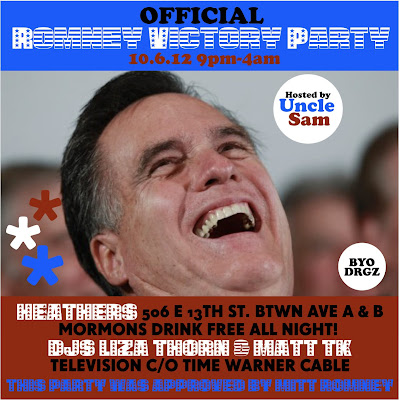 I was a little slow and thought it was real for a moment.

One of the newish co-owners kindly spelled it out for me.

Per Ray Lemoine: "This is a joke party. As in, we fucking hate Romney and this is satire."

But there is an Election Night party here.
Posted by Grieve at 6:03 PM 11 comments: 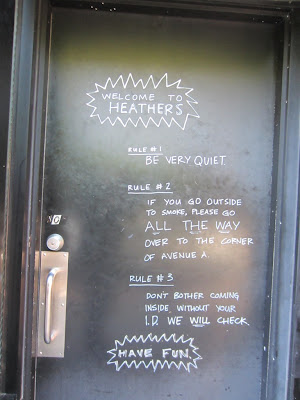 Last month, the CB3/SLA committee voted not to renew the East 13th Street bar's liquor license. So it was left up to the State Liquor Authority to have the final say. According to the Heathers Facebook page:

HEATHERS LIVES!
License is renewed, and in hand!!! 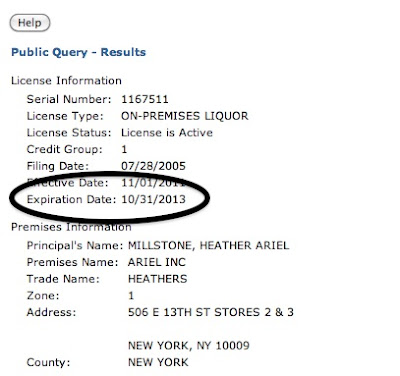 This is the second time in recents months in which the CB3/SLA committee voted not to renew a bar's license "with complaint history." ... only to have the State Liquor Authority give the OK for the renewal. (See TenEleven)
Posted by Grieve at 6:45 AM 10 comments:

You can read the rest of the post here.
Posted by Grieve at 6:37 AM 5 comments: 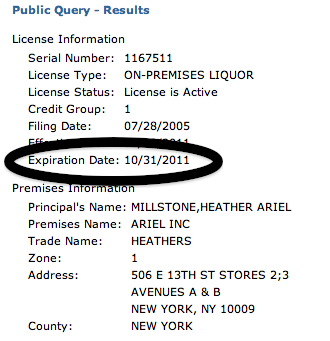 You can read the entire post here.
Posted by Grieve at 6:39 AM 16 comments: 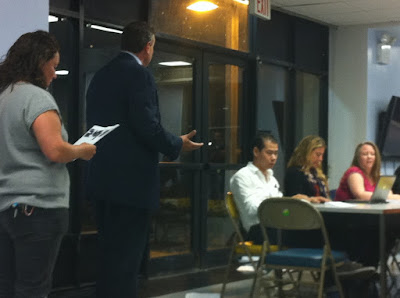 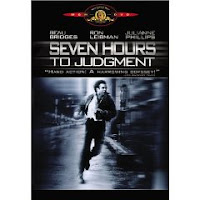 The CB3's liquor licensing meeting from Monday night just ended about five minutes ago. Well, it was a seven-hour meeting. And Eater correspondent Gabe Ulla bravely sat through all of it.

Here's his report. A highlight:

Heather's Bar, which was under renewals with complaint histories, was by the far the most contested application of the night. The community came out in full force (signs reading "NO TO HEATHER'S BAR") to explain why they believe the owner is negligent and the space is a detriment to the neighborhood. Critics point to an overwhelming amount of noise and smoke, as well as Heather's inability to tackle any of these problems effectively. The owner of the space insisted that she has done everything to satisfy neighbors and comply with community board stipulations, but that it "doesn't seem to be enough." The fact that the establishment is on a side street only makes matters worse. The board agreed to hold off on a vote until the residents and the bar owner set up a meeting to attempt to work out their problems.

The Lo-Down was there as well at the meeting...

Previously.
Posted by Grieve at 8:20 AM 2 comments: