The Times checks in today with a piece on the East Village/LES rezoning battle. “I implore you to see the plan for what it is — poison,” said Malcolm Lam, who spoke on behalf of the Coalition to Protect Chinatown and the Lower East Side.
Posted by Grieve at 7:17 AM No comments:

Email ThisBlogThis!Share to TwitterShare to FacebookShare to Pinterest
Labels: Lower East Side rezoning

Months may pass before the city’s planning commission decides on a 111-block rezoning of the East Village and the Lower East Side. That rezoning could allow for larger buildings on the neighborhoods’ major streets.

But the connective tissue between the neighborhoods, East Houston Street, is already showing signs of change, as for-sale signs go up and buildings fall — whether because of the proposed rezoning or despite it.

The Lee, for example, is a 12-story glass-and-masonry tower rising at Pitt Street on the site of a former boys’ club. Its nearly 100,000 square feet of space will hold 263 rental units, almost all studios.

In recent years, rentals on East Houston, like the hulking Avalon Chrystie Place and the Ludlow, have catered to the luxury market. But even if the Lee does have similarly large dimensions, as an “affordable” complex it is intended for quite different tenants.

For 105 of the units, the rent will be about $700 a month if the renter moves in from a nearby location and earns no more than 60 percent of the median income, or about $30,000, said David Beer, a director of Common Ground, a nonprofit group based in Manhattan and the Lee’s developer. Applications will be accepted starting in January.
Posted by Grieve at 6:59 AM 1 comment:

You may need some boots for this walk 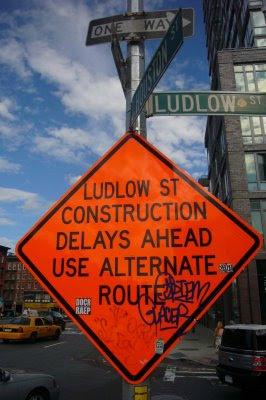 As you know, there's a public hearing at 9 a.m. Wednesday in Vanderbilt Hall at NYU's School of Law to discuss the 141-block rezoning of the East Village and Lower East Side.

Ramping up to that, the Daily News went on a walking tour of the neighborhood with Amanda Burden, who chairs the city planning commission and will lead Wednesday's meeting.

Here are a few excerpts from the article:

She looks at each neighborhood block by block, lot by lot. To her, the city is a jewel that needs constant care and safekeeping.

"Each neighborhood has its own personal DNA," says Burden, who had an immediate impact on the city when she took her position in 2002 by allowing restaurants, bars and cafes additional sidewalk space for outdoor dining. "It's my job to find it and save it."

To understand communities, Burden walks miles of city streets. Armed with a tape measure, sunglasses and comfortable yet stylish shoes (she is, after all, a former socialite), the planning commissioner eyes building heights, studies the flow of people and contemplates how an area's past relates to its present and future.

"It's my job to affect the process for the betterment of the people who live here, shop here and own businesses here," says Burden, pointing to the row of iron fire escapes that give a sculptural frame to the brown brick tenement buildings of the lower East Side.

"I picture myself part of the community. Here, there is a vibrant commercial and residential history. We want to keep ground-floor retail and ensure nothing can be built that will take away from the symmetry of these historic buildings. The magic here is in the density of people using these streets and living together."

"This wasn't here two weeks ago," Burden says, sneering at a vacant lot. "There was a building. Once you lose a building, you lose character and history. The Bloomberg administration is about growth and preservation. This is why we have to act fast to change the zoning, so developers aren't allowed to come in here and build whatever they chose. I don't mind a building that is in context with the others, meaning the same height with architectural guidelines, but small streets shouldn't have large development."

Orchard St. bustles on a Sunday afternoon. People shop, eat outside and ride bikes on narrow streets. Some construction sites show tall buildings made of concrete with no ground-floor retail.

"I'm biased toward skyscrapers," says Henry Brown, a physics student at City College who moved to the neighborhood from St. Louis. "I like them. I don't like ugly buildings. But even if they rezone, won't all these modern stores still look different than the old ones?"

"The essence of the East Village is tree-lined cool streets, small boutiques and community gardens," Burden says, walking along Avenue B toward Tompkins Square Park. "That's its DNA. Once you break it down to that fabric, you can act. Here, we want five- to seven-story buildings and small retail on the first and second floors. And we have to ensure these gardens stay put. No other community has this asset."
Posted by Grieve at 9:14 AM 3 comments:

"Small businesses and low-income New Yorkers keep getting pushed out" 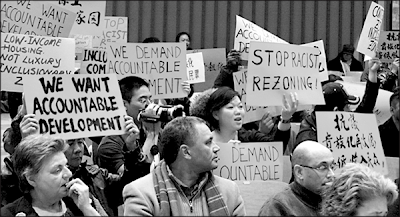 Juan Gonzalez checks in on the LES rezoning plan in the Daily News today in a piece titled Lower East Side rezone plan another Mike Bloomberg boondoggle:

Wah Lee, a slight, middle-aged factory worker, stood in front of the Municipal Building Tuesday vowing a long fight to save her Chinatown neighborhood.
All around her were dozens of Chinese and Hispanic residents of the lower East Side. They held up placards with words like: "Stop Racist Rezoning" and "Chinatown/Lower East Side Are Not For Sale."
They brought a box of petitions with the signatures of some 10,000 of their neighbors - all opposed to the City Planning Commission's new rezoning proposal.
Theirs is a story that has become all-too familiar during the Bloomberg era: another stable neighborhood turned upside down by a massive rezoning.
The sheer number of these rezonings - from Columbia University to Hudson Yards to Greenpoint-Williamsburg to Willets Point, boggles the mind.
City officials routinely claim it's for the good of the neighborhoods, but in the end a handful of well-connected developers and Big Box stores end up the big winners.
Small businesses and low-income New Yorkers keep getting pushed out.

[Downtown Express photo by Shoshanna Bettencourt]
Posted by Grieve at 6:59 AM 1 comment: