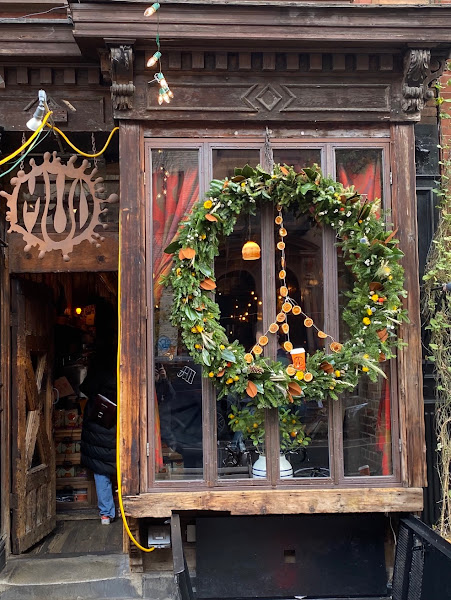 The holiday MUD Coffee wreath at Mudspot on Ninth Street between First Avenue and Second Avenue ... 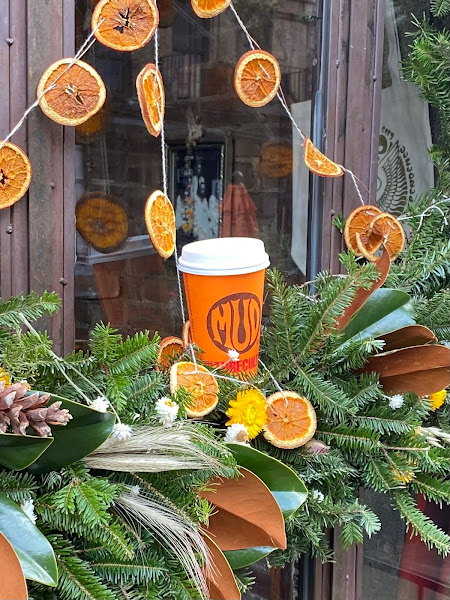 Mudspot Café closes for the week 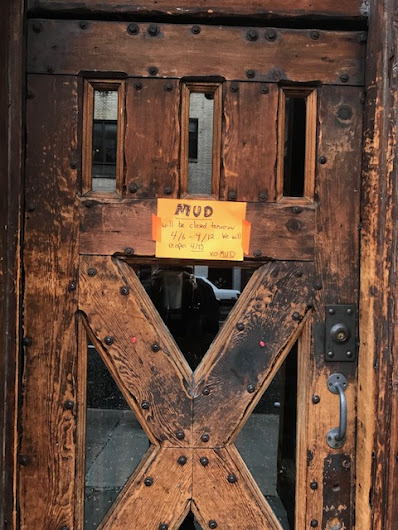 Mudspot Café has announced that it's closing for the week here on Ninth Street between First Avenue and Second Avenue. Aside from coffee, Mudspot had been selling a variety of pastries, grocery items as well as beer and wine in recent weeks.

we are taking a breath and closing for what is expected to be a pretty tough week in nyc. we aim to re-open monday 4/13.

thank you to our amazing staff for their unmatched endurance and beautiful souls. and thank you to all the health care and essential workers on the frontlines, who don’t have the luxury of staying home this week.

we all owe you a debt of gratitude...


Meanwhile, their online shop will continue to ship coffee.
Posted by Grieve at 8:00 AM 2 comments: 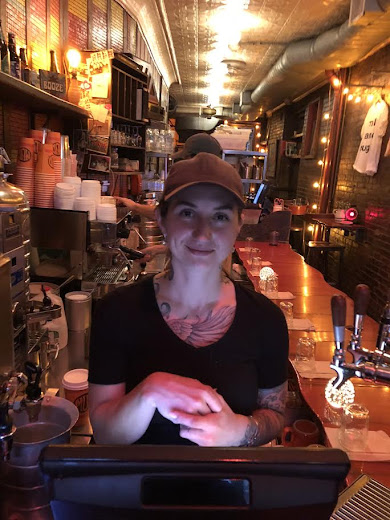 Last Saturday, residents and tourists in Hawaii received a terrifying emergency alert on their phones that read: "BALLISTIC MISSILE THREAT INBOUND TO HAWAII. SEEK IMMEDIATE SHELTER. THIS IS NOT A DRILL." 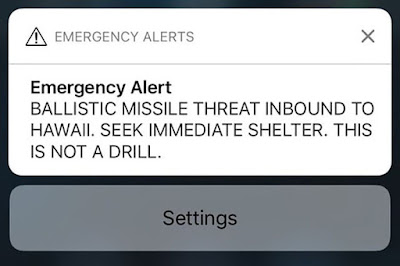 It turned out to be a false alarm, of course. According to published reports, the Hawaii Emergency Management Agency said that a single individual sent out the alert by mistake. It took emergency officials 38 minutes to send a new alert to mobile phones stating that the threat was a false alarm.

Lina Krupinski, who works at Mudspot Café on Ninth Street between First Avenue and Second Avenue, was in Maui at the time vacationing with her boyfriend. She shared her story with EVG correspondent Steven.

My boyfriend and I were awake for about half an hour before we received the alert for a ballistic missile inbound to Hawaii. We quickly went outside and there were people from the hotel gathering in panic. Everyone took this alert seriously and called their families to share the news. We did the same.

My body was just shaking and all I could think about is the different scenarios of the way we are going to die — on Maui in the middle of the Pacific Ocean.

I’m from Bulgaria and I moved to the USA in 2010. I haven’t visited my family too often — in fact, I last saw my parents five years ago. I couldn’t bear the thought that I was never going to see them again.

There was no information about the incident on the internet whatsoever. There was no potential shelter nearby. My boyfriend and I held each other in a hug in front of the hotel and waited.

Then we received the correction alert 38 minutes later. Relieved of the fact that it was a false alarm, we still were in shock of what just happened. I think such an error is unacceptable by all means. And the fact that it took 38 minutes to issue the correction is even more disturbing. We are glad that this was a false alarm, and hope that such “error” will never happen again.

It is not easy to just go on about your day normally after everything our minds were put through. This was our second to last day in Hawaii. We enjoyed the rest of our stay, but what happened on Jan. 13 we will always remember. It was an experience of a lifetime for sure. 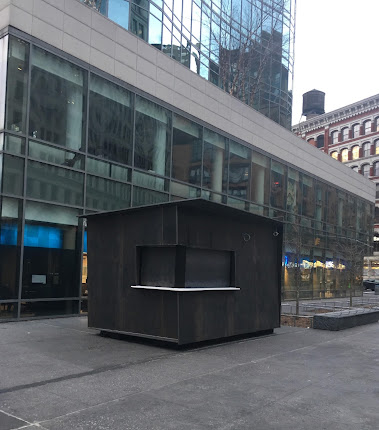 You may have noticed the arrival of a new cube-like kiosk on Astor Place yesterday.

There were all sorts of theories about it (CorTen Steel LinkNYC kiosk, "Game of Thrones" Winds of Winter bus shelter, Amanda Burden-Christ map room, etc).

Anyway, here's the official release about what's happening here via the EVG inbox...

Although the MUD Truck is now retired, MUD is delighted to once again be part of Astor Place ...

To design and create the kiosk Perry has collaborated with the same creative team at Patrick Nash Design that designed and built Flatiron Green and Benvenuto Café. Visually, the kiosk references the neighborhood’s artistic character and reflects the design profile of Tony Rosenthal’s iconic Alamo culpture, which turns 50 this year. The raw steel finishes and bold geometric forms of Astor Plate will create a natural and inviting ambiance, appropriate for this quintessentially urban environment. 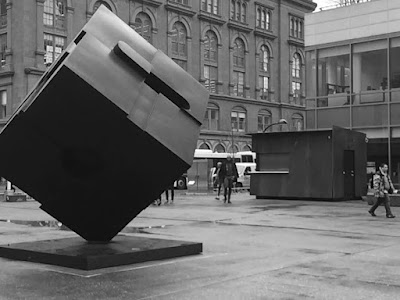 Astor Plate is expected to open in March.
Posted by Grieve at 4:30 AM 30 comments:

[Updated] For the Mudtrucks, chrome is the new black 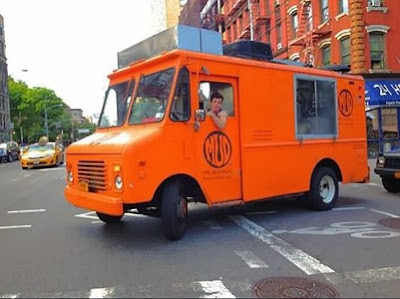 Well, it looks like Mudspot Coffee has retired their familiar orange ... the Mudtrucks, which have been around since 2000, have a new look as of yesterday ... @sammers133 spotted the new chrome model on Astor Place today...
‏ 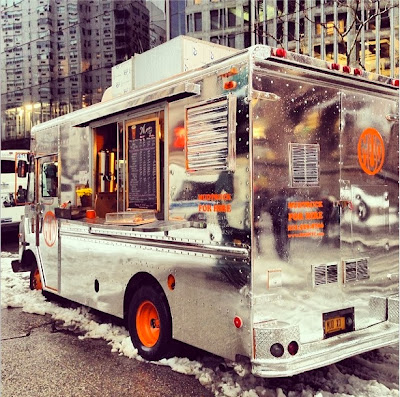 Nice! But will the truck absorb too many rays reflecting off of 51 Astor Place? May need some better AC come summertime.

We checked in with Mudspot General Manager Yasmina Palumbo about the change.

"Well, it kinda just happened. We were part of an event that asked us to go chrome for the day. We did it and we liked it so much we decided to keep it — but just for a minute. Mudtruck Orange will be back — way before the melting sun of summer!" 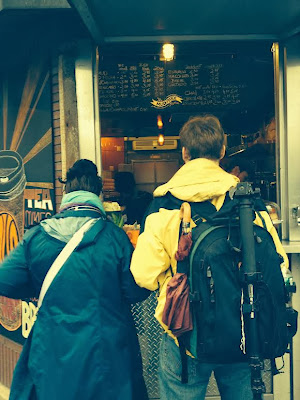 Mudspot Café is now open for coffee business in the kiosk off of East Houston and East First Street.

As we first reported on Oct. 10, the East Ninth Street-based café was taking over the food and beverage service from S'MAC, which left the space back in July.

EVG reader Jennifer Spero, who took the above photo, notes that they had muffins and other breakfast items as well as a full coffee/espresso menu. 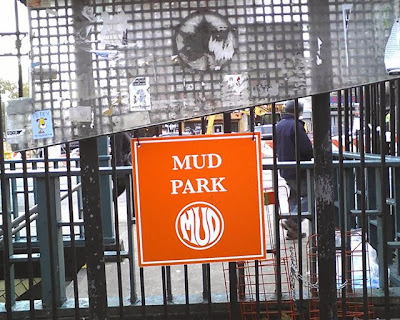 Mudspot Café opening at the First Park kiosk next month

Mudspot Café prepping kiosk for service in First Park
Posted by Grieve at 10:10 AM 12 comments:

Mudspot Café opening at the First Park kiosk next month

Looks like the Mudtruck will have another sibling in the family.

Back in July, S'MAC decided to discontinue its service at the First Avenue kiosk. At the time, Caesar Ekya, who owns and operates S'MAC with his wife Sarita, said that they were hoping to find another vendor to assign the lease to here off of East Houston and East First Street.

And they have: Mudspot Café will soon be operating from this location.

"Yes, it's happening," Mudspot General Manager Yasmina Palumbo confirmed to us via email. "[We're] hoping to open sometime in November."

Ekya said that sales at First Park were sluggish, and that they needed to focus on their original location on East 12th Street and new branch in Murray Hill. He had said finding another vendor for First Park was preferable to turning the lease back over to the city, which would then open up a potentially lengthy bidding process.

"It would have been in everyone's best interest if we assigned the lease instead of giving it back to the city," Ekya said."And Mud was the best fit for that location."

S'MAC opened the satellite location here in January 2012. Prior to this, Veselka had the space for five years until June 2011. Mudspot's original location on East Ninth Street will remain.

Previously on EV Grieve:
More about S'MAC's decision to leave First Park
Posted by Grieve at 5:30 AM 11 comments:

Let's take a quick look at the bicycle parking rack that the DOT installed this morning in front of MUD on East Ninth Street... via EV Grieve reader Robert... 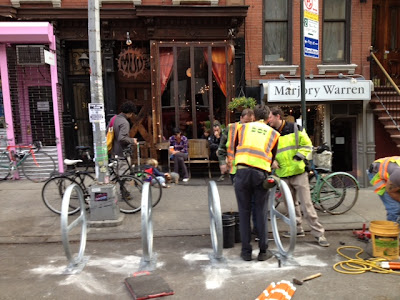 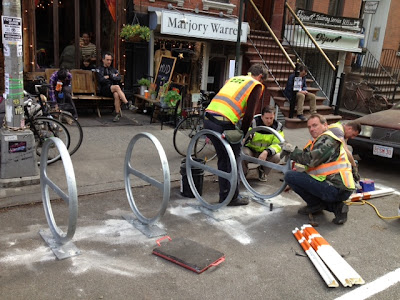 And the final product, via EV Grieve reader MP, who started off all this coverage today... A few people believe that this is the first one not only in the neighborhood, but also in the city (haven't verified this, but...) 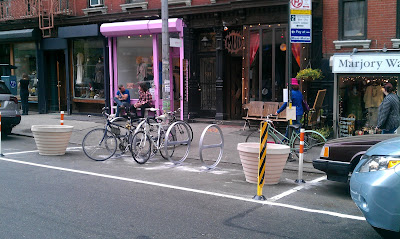