The new recreation space at Pier 42 gets its official welcome 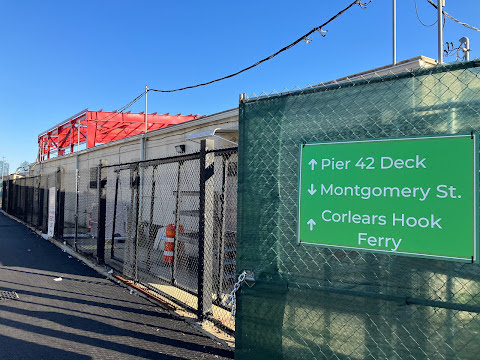 On Tuesday, the city officially unveiled the new sports area at Pier 42 — aka Pier 42 Upland Park and Pier — along the East River...

DDC joined @NYCParks, @NYCEDC, elected officials, and members of the community to cut the ribbon on the new recreational deck at Pier 42—an #ESCR mitigation project. It features a turf soccer field, tennis courts, and more, with access to the waterfront. https://t.co/0VCCFO2kq0 pic.twitter.com/kfTCwtrcQJ

The space opened without any fanfare on Oct. 8. (You can read our post here about it.)
And coming next summer, per the city's press release on the grand opening:

Parks is working on a related project to develop Pier 42's passive "upland park" section, which is slated to be completed in late summer 2023. The Upland Park was conceived as part of the Pier 42 master plan, created by Parks in 2012  ... The upland park will provide much-desired green space for the densely populated Lower East Side neighborhood. The pathway network throughout the linear park is inspired by the flow of water — a primary path with offshoots along its weaving line. It will also include an entry garden, a playground and a comfort station.

You can access the amenities at Montgomery Street/South Street at the entrance to Pier 36. Our previous post about it includes a Google map in case you want to find it and see the space for yourself.
Posted by Grieve at 7:56 AM 5 comments:

Email ThisBlogThis!Share to TwitterShare to FacebookShare to Pinterest
Labels: Pier 42 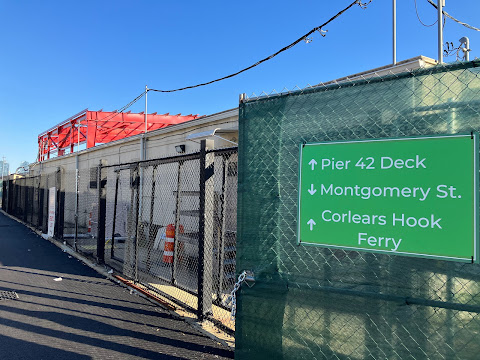 On Oct. 8, the city quietly debuted the new sports area at Pier 42 — aka Pier 42 Upland Park and Pier — along the East River.
Construction on the much-discussed $46-million project started in March 2021. Per the East River Alliance: "It’s the first step in the long-awaited transformation of a former banana warehouse/parking lot into waterfront recreation and green space for the LES community."
As The Lo-Down previously reported, the local planning process began in 2012 after funding was allocated from the Lower Manhattan Development Corp.
Delays were reportedly due in part to the East Side Coastal Resiliency Project, which has currently seen the closure and demolition of all East River Park amenities below Houston Street.
Part two of the Pier 42 project, which will include a playground and comfort station, is expected next summer. (You can find more city background here.)
The new space includes soccer fields, tennis courts, basketball courts and picnic tables... here's a look... 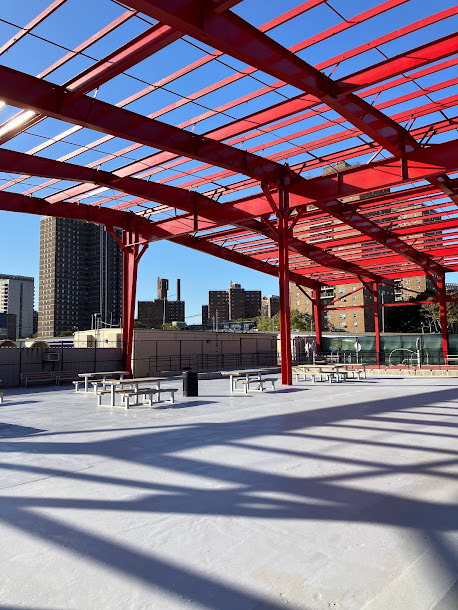 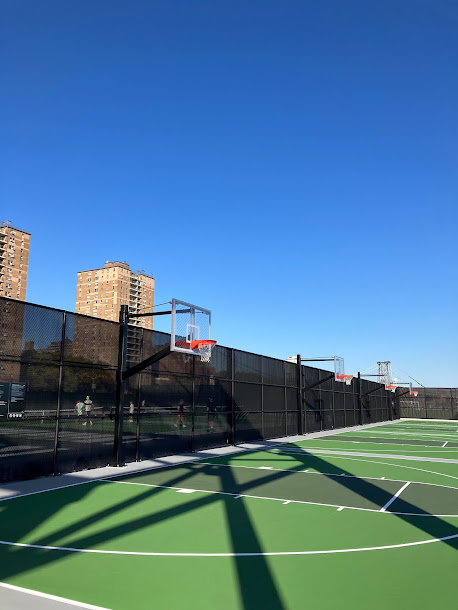 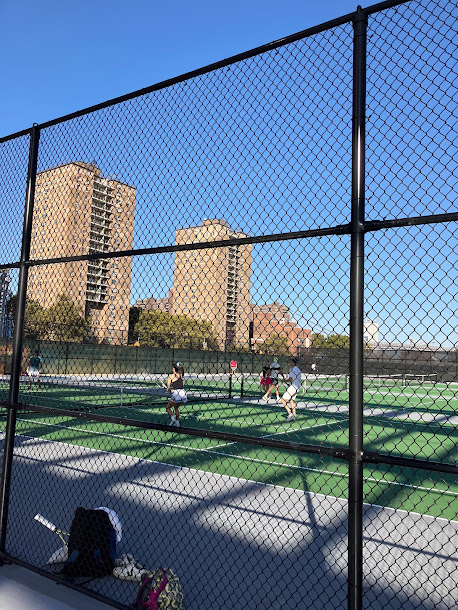 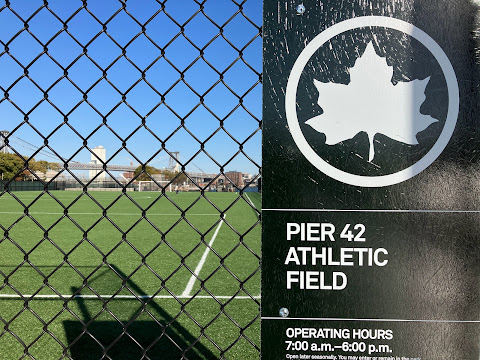 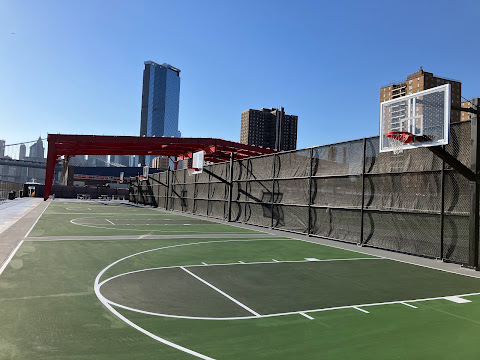 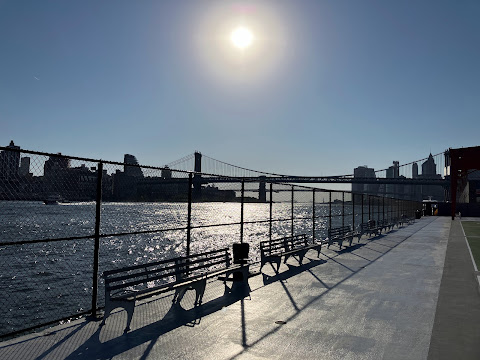 While the area was pleasant enough on a crisp fall afternoon with Bridges and Brooklyn views, some residents may wonder what the tree-less, shade-less area will be like on a hot summer day (no sign of drink fountains yet either — BYOW). Some comments on an East River Park Action Instagram post compared the space to a prison yard.
For now, the new complex is open from 7 a.m. to 6 p.m. You can access the amenities at Montgomery Street/South Street at the entrance to Pier 36 (former home of the Immersive Van Gogh!) ... and follow the walkway toward the north, which doesn't seem promising at first... 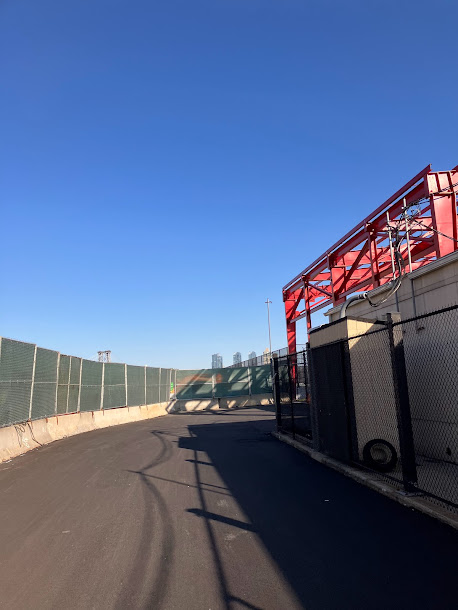 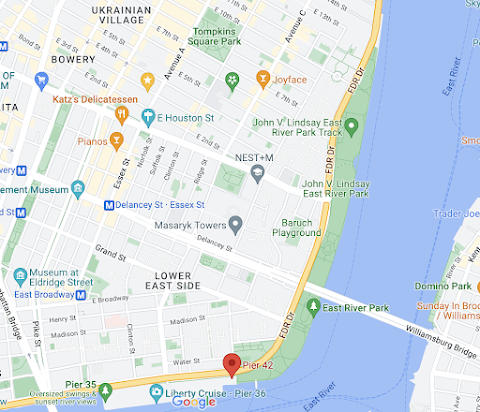 Your chance to discuss plans for a new Pier 42 park 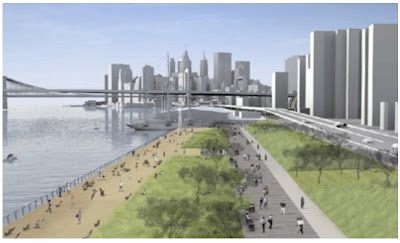 As you may know, there are now plans (with funding!) that would redevelop Pier 42 to build a new park along the East River between the Manhattan and Williamsburg bridges ... the park/urban beach would include green space and river access, according to one report. "Visitors to the fenced-off beach would not be permitted to swim in the river but would be allowed to dip their feet into it," the Post noted.

Per The Lo-Down: "Part of the Pier 42 money will be used to remove an abandoned shed to make room for more public space, and to stabilize the pier, which is just south of Montgomery Street. The entire Pier 42 park project is expected to take about five years and cost more than $40 million."

This would all eventually connect Lower Manhattan's waterfront parks. 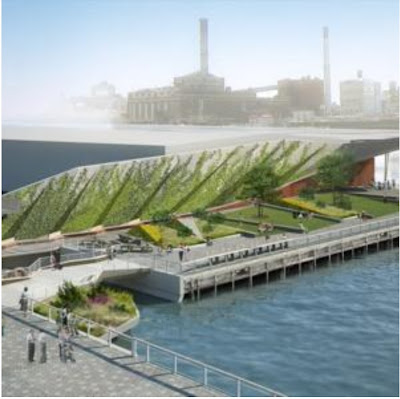 You'll have your chance to tell our elected politicos what you think of the plan... there's a public meeting tonight hosted by CB3, the Parks Department and State Sen. Daniel Squadron’s office. It takes place at 7 p.m. at the BRC Senior Services Center, 30 Delancey St., which is between Chrystie and Forsyth.

For further reading ... The Lo-Down has been following this story for some time. Read more here.
Posted by Grieve at 6:15 AM No comments: