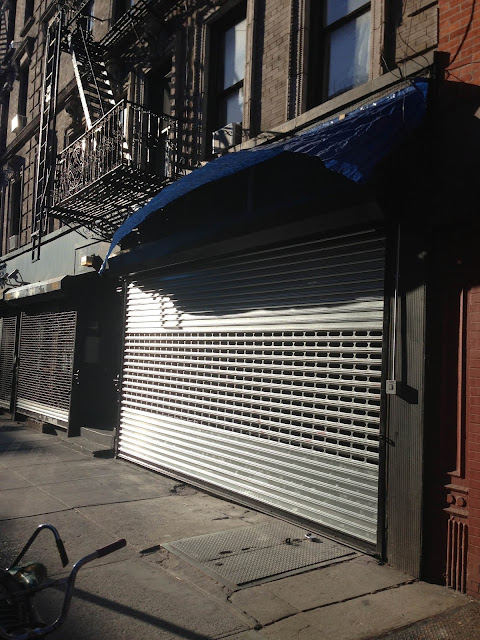 Of course, they are not coming back... workers have been renovating the space these last six or so weeks. A tipster on the block said that the storefront will be "a management office for the building."

This is one of the 28-29 buildings that Jared Kushner's Kushner Companies bought up in the East Village in recent months... Per the tipster: "Maybe it will be the central office for all of Mr. Ivanka Trump's East Village real estate holdings." More specifically, the reader understands that this will be an office for Westminster Management, a division of Kushner Companies.
Posted by Grieve at 5:42 AM 3 comments:

Crowdsourcing campaign winding down for Rawvolution — in Santa Monica 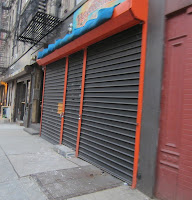 Rawvolution, the raw vegan cafe/retail store on East 12th Street, closed "for renovations" back in early December. At the time, Jill heard from an employee that they would reopen Jan. 1.

A week or so later, a former employee said the Rawvolution was done here, that the owners were focusing on their Santa Monica, Calif.-based flagship store.

Claimed the employee: There was "no warning, or heads up to their employees…shady shady." Said another former employee: "Furthermore, they failed to pay their entire staff their last two paychecks."

The Rawvolution website still says: "At this time we are not delivering locally to New York City, this is only temporary and will keep you updated when we do start again."

Meanwhile, in Santa Monica, a crowdsourcing campaign is winding down to save that shop. Per IndieGoGo: "Our landlord is trying to evict us. He has been trying to find ways to take away this community hub of amazing food and inspiration for years and to replace RAWvolution with a corporate coffee bar. We need $38,000 to keep the doors open and to ensure that we have enough capital to ensure a sustainable future." [Updated: Good point per a commenter: No mention in this campaign of the East Village location.]

An East 12th Street resident told us that the storefront has been gutted, with some "real-estate types" in and out of the place.

Rawvolution opened in August 2011 here just east of Avenue A.
Posted by Grieve at 5:45 AM 11 comments:

Email ThisBlogThis!Share to TwitterShare to FacebookShare to Pinterest
Labels: closed for renovations, Rawvolution 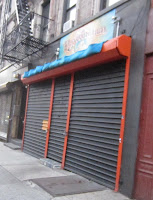 Last week we noted that Rawvolution, the vegan cafe on East 12th Street, would be closed until Jan. 1 for "renovations."

Meanwhile, a now-former employee sent us the following:

"Rawvolution closed down to the public as of December 1 (with no reason, warning, or heads up to their employees…shady shady.)"

We haven't heard anything official yet from ownership...

Email ThisBlogThis!Share to TwitterShare to FacebookShare to Pinterest
Labels: Rawvolution

Rawvolution has 'closed for renovations' on East 12th Street

Jill heard from an employee that the owners are in California ... and they are supposed to reopen Jan. 1.

Meanwhile... anyone ever try the place?

Previously.
Posted by Grieve at 6:05 AM 5 comments: