Juice Press is up to something on East 1st Street 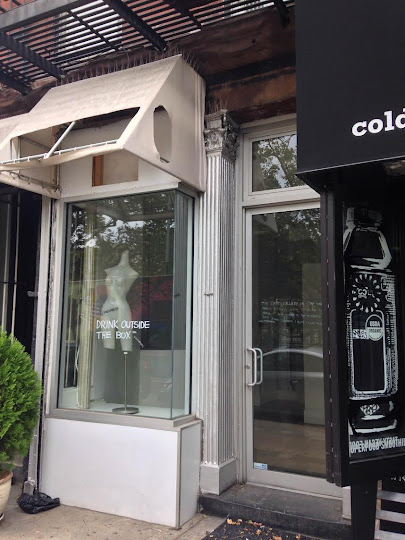 The writing on the door reads… 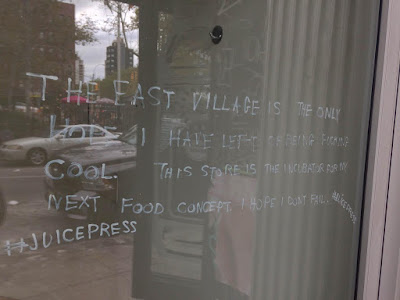 "The East Village is the only hope I have left of being fucking cool. This store is the incubator for my next food concept. I hope I don't fail." 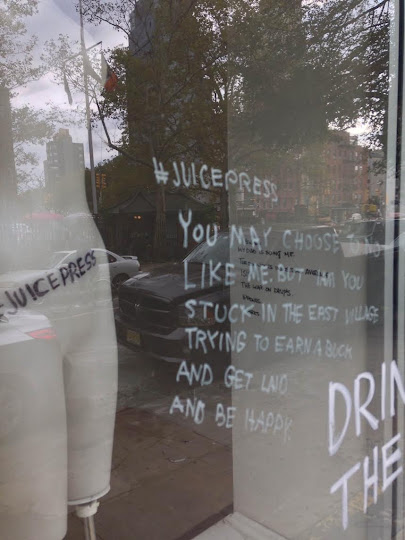 Not sure what any of this is supposed to mean. Before opening the East First Street shop in 2010, JP founder Marcus Antebi put up signs announcing a Robot Daycare and NY Academy of Mime, among other things, coming soon.

Perhaps this space will serve as JP's test kitchen. They lost that space when JP closed the location on East 10th Street near Avenue A in the spring after the landlord — Steve Croman — apparently continued to drag out repairs in the building.
Posted by Grieve at 4:15 AM 5 comments: 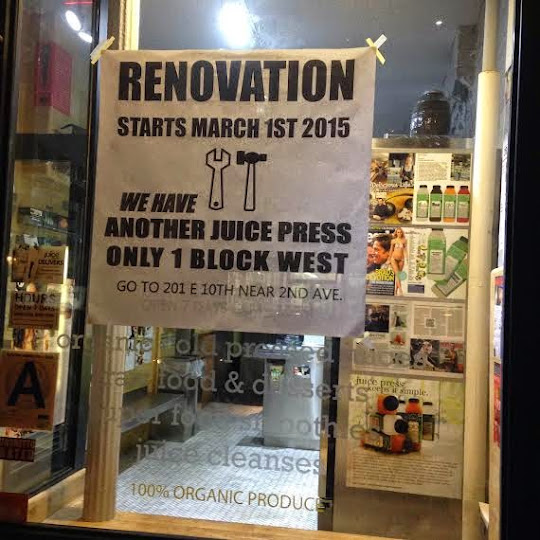 Apparently those plans changed. An EVG reader shared this photo from yesterday, when a store for rent sign arrived in the front window… 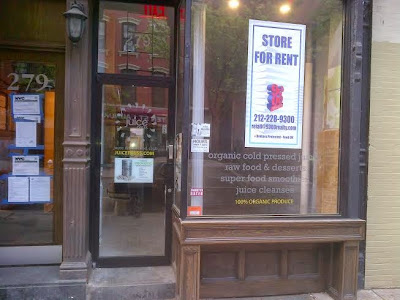 A recent article at well + Good noted that Juice Press "is expanding faster than your body can absorb green juice nutrients." This is the first time that we actually heard about a JP closing.

Steve Croman's 9300 Realty is the landlord.

Previously on EV Grieve:
Juice Press on East 10th Street (the one near Avenue A) closes for renovations
Posted by Grieve at 4:30 AM 8 comments:

Not sure exactly what is being renovated here. (We thought it might also serve as a JP test kitchen.)

One tipster on the block heard that the JP was expanding into the vacant storefront next door… but that rumor hasn't been confirmed. 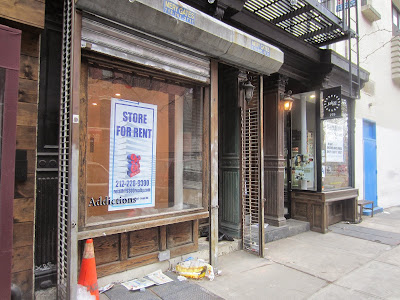 There are approved work permits on file with the city for "interior renovation with partition and plumbing works" on the first floor.

Email ThisBlogThis!Share to TwitterShare to FacebookShare to Pinterest
Labels: closed for renovations, The Juice Press 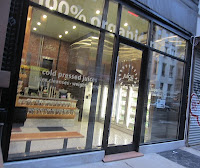 The store is now hiring, as you can see from the signs out front... 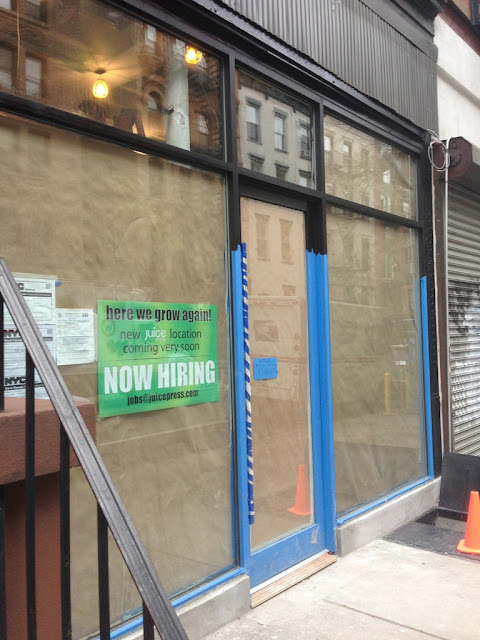 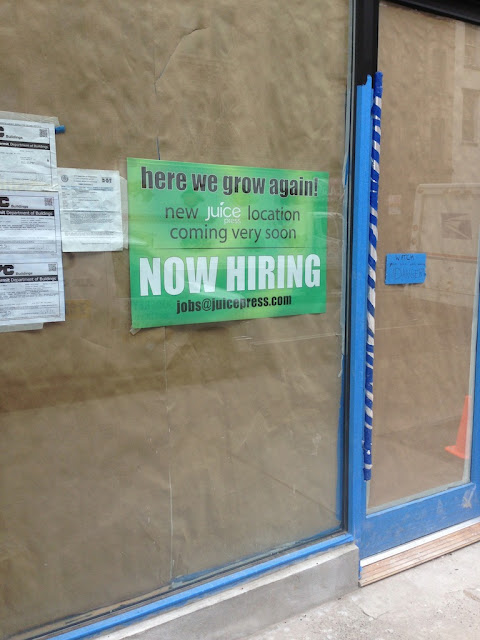 The Juice Press opened its first location on East First Street in April 2010... the raw juice/raw food retail spot has expanded to include several locations, including on East 10th Street near Avenue A.

Earlier this year, the American Copy Center changed names and moved down the block here on East 10th Street... opening up this prime space adjacent to Nicoletta's to-go operation ... 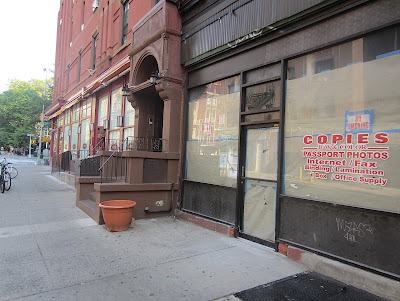 ... and the work permit in the window reveals the new tenant... "Juice Press Store"... 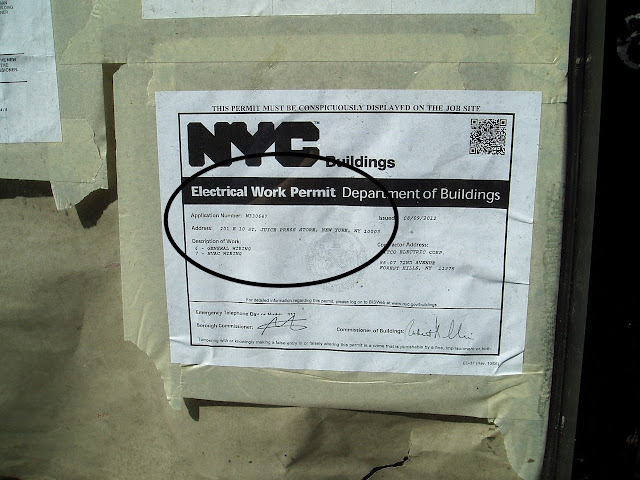 The Juice Press has proven to be quite popular since opening on East First Street in April 2010... the raw juice/raw food retail spot has expanded to include several locations, including on East 10th Street near Avenue A... as well as one on Mott between Houston and Prince...

Expect a jokey coming soon sign here one of these days, such as a Robot Daycare/Missing Sock/Mime Academy ... as we've seen at the other under-renovation Juice Press locations...

Previously on EV Grieve:
Another day, another wacky new store sign on First Street
Posted by Grieve at 6:35 AM 11 comments: 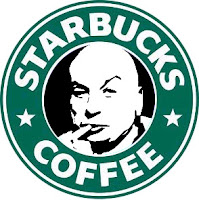 According to Page Six today — yes! Starbucks CEO Howard Schultz reportedly hired away the manager of Liquiteria on Second Avenue and 11th Street to train staff in Seattle for the chain's new juice-bar concept. Liquiteria owner Doug Green had this to say about Schultz "He befriended us, asked about our concept, then took her. It is a huge slap in the face."

Schultz had been spotted checking out Juice Press on First Street and Liquiteria back in March.
Posted by Grieve at 2:30 PM 26 comments:

We first heard the rumor back in March of a northern outpost for Juice Press ... Anyway, the second location opened on Saturday. 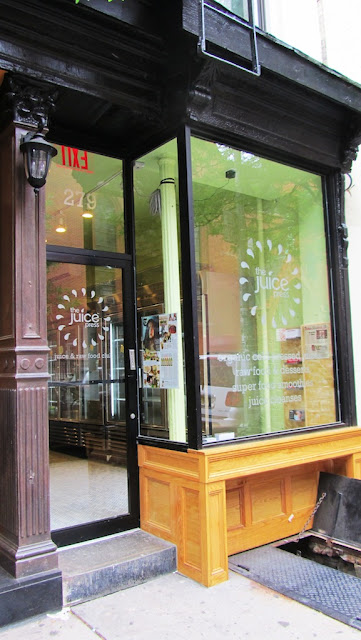 A tipster noted that they won't have smoothies at this location until the end of the month.

Previously.
Posted by Grieve at 6:25 AM 9 comments:

Last month, we reported that Juice Press was opening a second East Village location... on East 10th Street near Avenue A to be exact... Thanks to EV Grieve contributor samo for spotting the new signage... 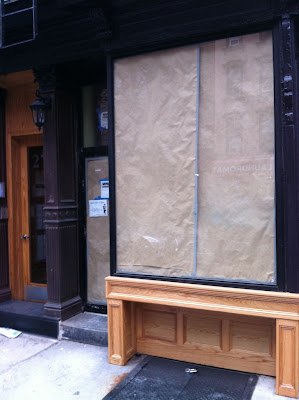 ...complete with the telltale goofy signs that we saw when Juice Press was prepping their East First Street location.... 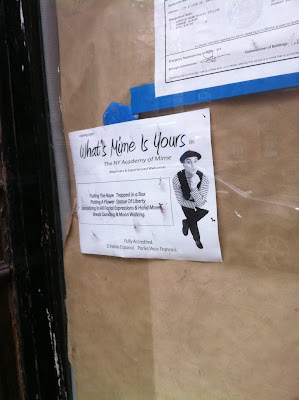 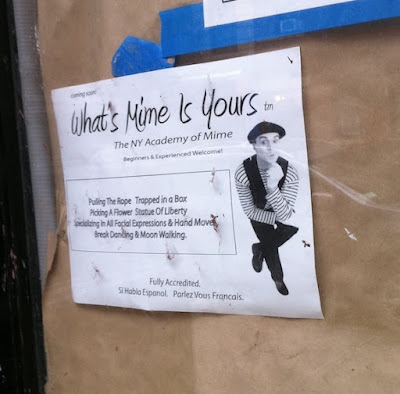 What's coming to the Robot Daycare/Missing Sock/Mime Academy space
Posted by Grieve at 6:45 AM 2 comments:

Several readers have noted that the Juice Press, the popular cold-pressed juice joint on East First Street near First Avenue, will open a second East Village location in a few months... one tipster even put the new storefront in this space on East 10th Street just west of Avenue A... 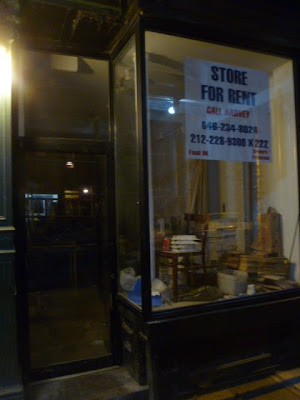 We asked founder Marcus Antebi if the Juice Press was opening a second location. He responded via e-mail: "Could be. I might do a laundromat instead. More quarters."

That came with an "LOL" ... they've been kind of funny all along... as you may recall, the storefront featured an array of goofy signs — Robot Daycare/Missing Sock/Mime Academy — before opening last May.
Posted by Grieve at 6:38 AM 16 comments:

Email ThisBlogThis!Share to TwitterShare to FacebookShare to Pinterest
Labels: rumors, The Juice Press

A sign is up at the Juice Press on First Street near First Avenue... showing an opening date of Thursday... plus other details about what's to come here, such as cooking classes... 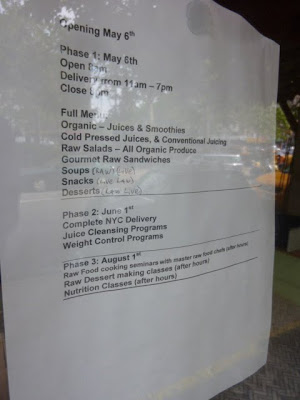 Previously on EV Grieve:
What's coming to the Robot Daycare/Missing Sock/Mime Academy space
Posted by Grieve at 6:30 AM No comments: