"Splendor in the Grit" 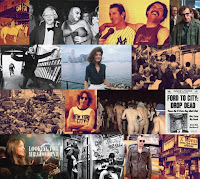 Thanks to Facebook friend Stacy for pointing out an article by James Wolcott in the June Vanity Fair. Story title: Splendor in the Grit. It begins:

With Wall Street neutron-bombed by its own hubris and the American economy crawling along the curb, jitters have broken out that New York City might revert to the crumbling mayhem of the 70s, when it was every freaky hair ball and wounded bystander for himself—Mogadishu on the Hudson. When one ponders the 70s (as I, working on a memoir of the period, do), the word “pretty” doesn’t jeté to mind. Nor do the words “dulcet” and “fastidious.” From surviving artifacts, it’s easy to draw the impression that everybody was living in rubble and yelling like Vincent Gardenia.

Posted by Grieve at 6:43 AM No comments:

Yesterday, BoingBoing posted an excerpt from the July Vanity Fair essay by Christopher Hitchens on the demolishment/development of Greenwich Village.
Here are a few responses to the essay/post:

#9 POSTED BY SEYO , SEPTEMBER 4, 2008 11:25 AM
The only thing that will save NYC in general, let alone the Vill., would be a brutal global recession. An economic downturn that would drive the rich people away and back to the burbs, and that would make foreigners stay home. Crime rates rising, budgetary deficits forcing reduction of police, and infrastructure breakdowns would help. In other words, the 1970's all over again. Not likely to happen. Bloomberg has a budgetary surplus, and has devoted his mayoralty towards turning Manhattan into a "luxury product" for financial service executives, lawyers, media moguls, international restaurateurs and fashion designers, and foreigners from the wealthy EU and Arab nations. His strategy is impervious to recession. While the rest of the country might be experiencing contraction, NYC, specifically Manhattan, has stayed stable. He doesn't give a shit about Bohemian culture, nor do the wealthy people flocking here. What they want is an Epcott Center simulacra of NYC grit and edginess because it is so Sex and the City, but they certainly don't want the real thing.

#14 POSTED BY ORCATEERS , SEPTEMBER 4, 2008 11:54 AM
I think that in a lot of neighborhoods like this, small business owners get punished for their success. They stick it out for years in a non-central neighborhood with a high crime rate and after all their hard work, the residual benefit of their business (increased community interaction, more pedestrian taffic, etc.) causes rents to rise outside their grasp, or for wholesale redevelopment to occur.

Recently I visited a traditionally downtrodden suburb of Seattle and my first thought was "wow, so many authentic, diverse, independent businesses, this place doesn't stand a chance!"

#15 POSTED BY NEWWAVE , SEPTEMBER 4, 2008 12:03 PM
Forget the Village, there isn't a single neighborhood in New York that resembles what it was in it's "heyday". Most of the people complaining have already missed the party. NYC for the most part is a dead playground for yuppies and trustfunders. Look in your backyard before you head to NYC looking for bohemia. The real thing is probably closer than you think.
Posted by Grieve at 11:52 AM No comments:

"Every successful society needs its Bohemia, a haven for the artists, exiles, and misfits who regenerate the culture" 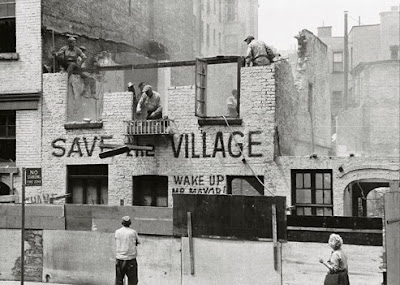 Finally made it past the cover of the July Vanity Fair.

Last Call, Bohemia
Every successful society needs its Bohemia, a haven for the artists, exiles, and misfits who regenerate the culture. With the heart of New York’s West Village threatened by developers, London, Paris, and San Francisco have a message for Manhattan: Don’t do it!

[The photo: The studio of the artist Arnold Bergier, at Greenwich Avenue and 10th Street, which was demolished in 1960 to make way for a 14-story building (despite the painted entreaties). Photograph by Fred W. McDarrah.]
Posted by Grieve at 1:05 PM No comments: