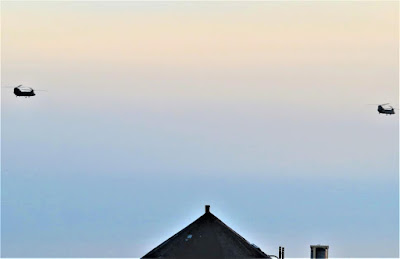 A view toward the East River late this afternoon via Bobby Williams...
Posted by Grieve at 8:52 PM 2 comments: 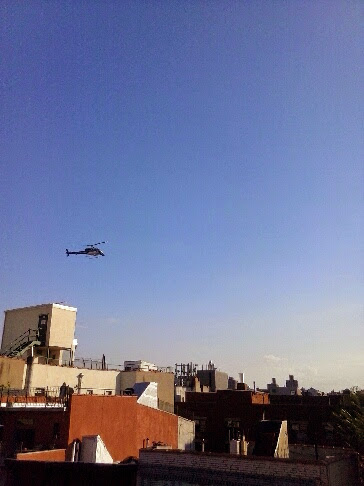 [Via Bill the Libertarian Anarchist]

So if you were around Avenue B (below, say, East Seventh Street) late this afternoon... then you likely heard the helicopter PRETTY MUCH LAND IN YOUR LIVING ROOM... 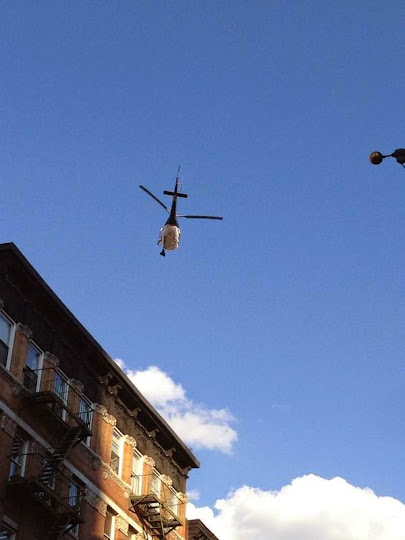 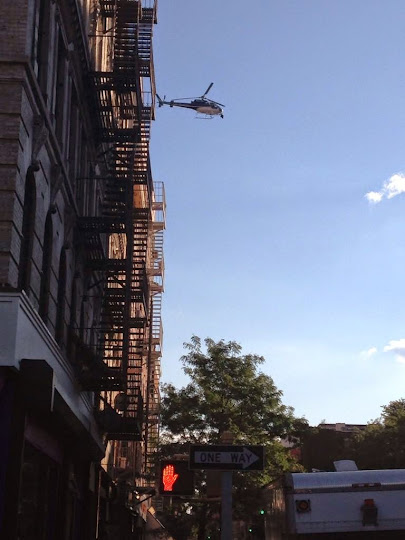 We've heard various sources for the noise ... including that a crew was filming a skateboard documentary (!?) ...

A reader sent along another photo… 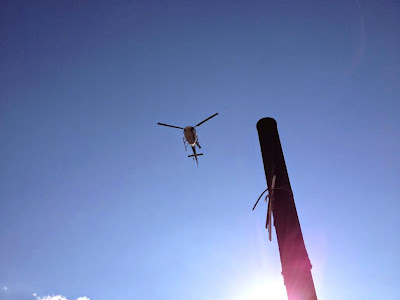 We received all sorts of WTF reports yesterday afternoon about a low-flying helicopter hovering over parts of the East Village ... specifically Avenue A and East Fourth Street... 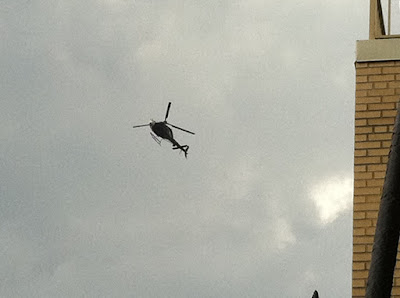 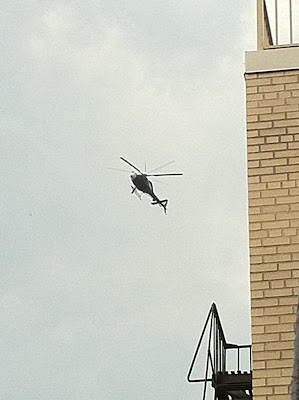 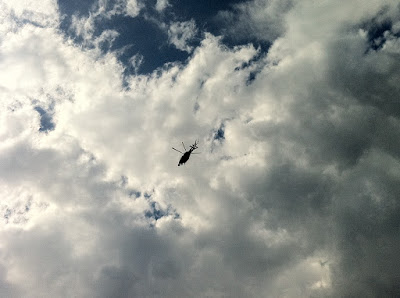 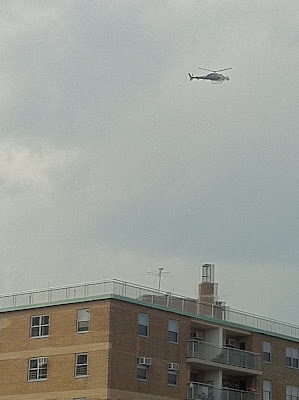 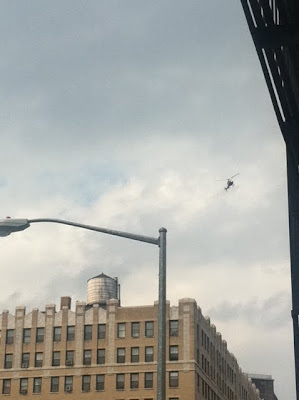 And jdx also shot his own film of the filming...

Several readers said the helicopter was filming scenes for a TV show or movie ... Meanwhile, a few other readers said it was for the upcoming movie, "Extremely Loud and Incredibly Close," a 9/11-related film starring Tom Hanks, Sandra Bullock and John Goodman, among many others. The movie is based on the 2005 novel by Jonathan Safran Foer. Here's a confirmation tweet from a very credible source.
Posted by Grieve at 4:02 PM 4 comments:

Getting all sorts of reports about "low-flying, military-style helicopters" hovering over the East Village early this morning... Twitter was a place to go for some commiserating at 4 a.m. 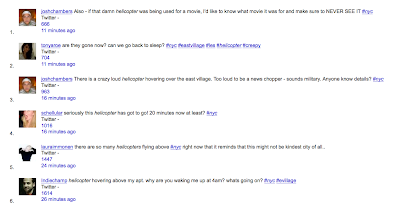 In any event, as of 6:30 a.m., we haven't heard any details about what this might have been all about...

Updated: This is likely the cause of the massive air search. Via The Lo-Down:

A 50-year-old man was stabbed to death in the lobby of a building at 190 Stanton Street in the wee hours this morning.

NYPD cruisers and a helicopter converged on Stanton between Attorney and Ridge following a 3:23 a.m. call and found the victim dead on arrival, according to a police spokesman.

Updated: EV Grieve contributor samo is on the scene on Stanton and sends photos of the police presence. 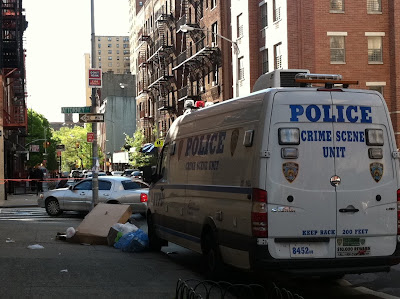 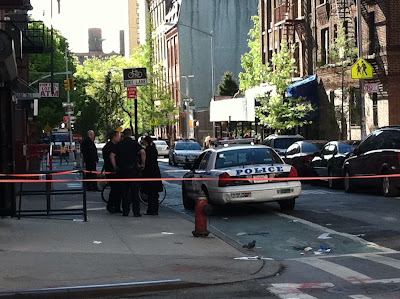 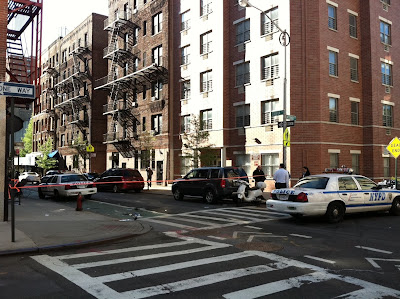 All sorts of reports of low-flying helicopters around Avenue A

Several readers have sent along notes asking what is going on now above Avenue A... 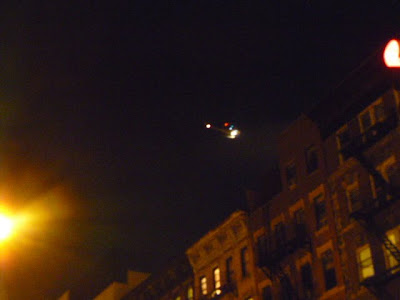 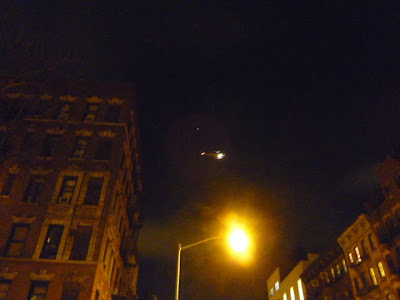 We spotted one helicopter awfully close to rooftops along Avenue A near St. Mark's Place and Ninth Street... We heard another report of helicopters above Second Avenue and Sixth Street... another reader reports seeing four low-flying helicopters... Nothing on the ground (massive police presence, say) indicates anything major is going on... I asked some teens (my mistake!) what was happening... They said someone jumped off the roof, then started laughing...
Posted by Grieve at 6:44 PM 19 comments:

After last night's episode ...Several EV Grieve readers pinpointed the helicopter this evening to east of Avenue C and roughly a little south of Seventh Street... 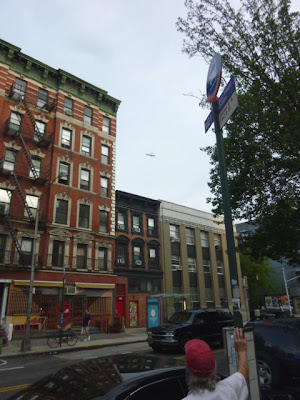 We arrived to find a very low-flying helicopter... no word just yet on what or who they were looking for... 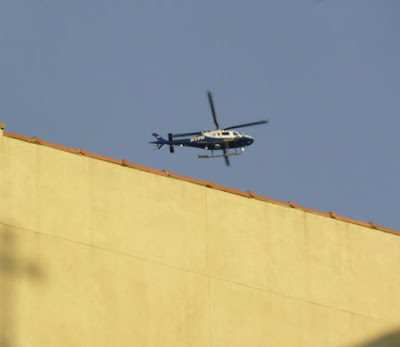 As EV Grieve reader Erin noted, "Last week a burglar came in through a 2nd floor window in our building on e 6th betw B & C. My neighbor screamed when she saw him, and he ran off. Some construction is being done on the ground floor, and the fire scape ladder had been extended down the ground - that's how I think he got up."

OK, what's the story with all the helicopters.... 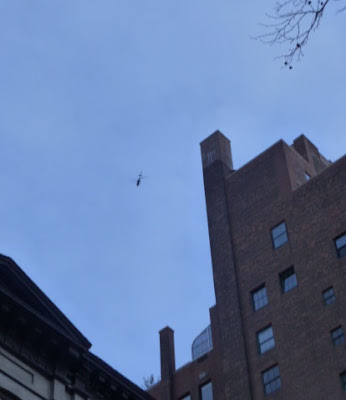 Been buzzing around for an hour...
Posted by Grieve at 5:49 PM 3 comments:

Why was a helicopter circling the East Village at 4 a.m. or so?

We're getting of sorts of e-mails about a helicopter hovering around the neighborhood early this morning/late last night (depending on your schedule...):

"I've just been listening to a helicopter circle round and round the EV for about an hour...it seems to have stopped now. It was distinctly creepy..."

And from Lux Living:

Did you hear the helicopters last night? So annoying.

Hi, my name is Sebastian Foss. As incredible as it may sound you're about to discover a system how you can drive 1000s of potential customers to any website or affiliate website at $0 cost to you! What if I told you that I'm making thousands of dollars each week and I'm not paying a dime for advertising ?

And in the Twittersphere...

I haven't heard any news account to explain this either.... Anyone have any ideas/theories/conspiracies/idle gossip? 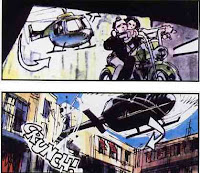 Thanks to the EV Grieve reader for pointing out this item from the Post:

Don’t be alarmed if you see low-flying helicopters around Manhattan.

They’ll be around the city between 7 a.m. and 7 p.m. on Thursday and Friday.

The locations include midtown, Wall Street, and the George Washington, Manhattan and Verrazano bridges.