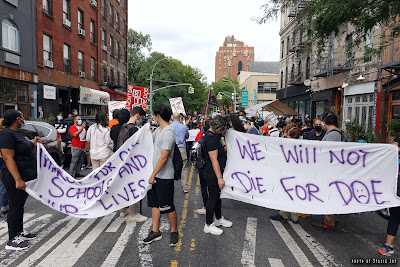 Students, parents and teachers from District 1 gathered on Seventh Street and Avenue B this afternoon to rally for a safer return to school this fall ... EVG contributor Stacie Joy shared a few photos from the start of the March for Our Schools and Our Lives ... which eventually ended at City Hall... 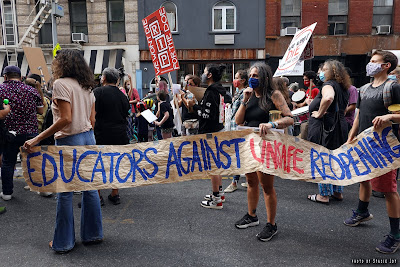 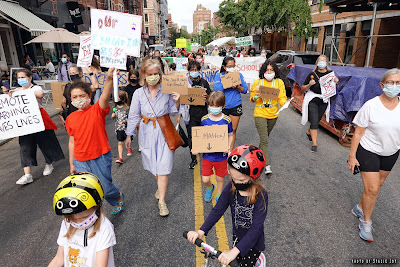 Posted by Grieve at 8:30 PM No comments: 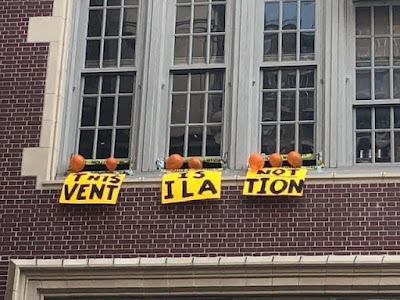 As seen at the Neighborhood School/PS 63 on Third Street — "This Is Not Ventilation" on a window that only opens a few inches ... as teachers continue to protest in the days leading up to the start of in-person classes on Monday...
Earlier today, a reporter asked the mayor about ventilation concerns here. Per NY1: "We will absolutely send the team back to PS 63 ... to see exactly what happened. And if any classroom is not up to snuff, it'll be taken out of circulation immediately. And it will not be used until it is fixed."

Photo via @robinmenikoff
Posted by Grieve at 9:01 PM No comments:

[Postponed] A march for a safe schools reopening 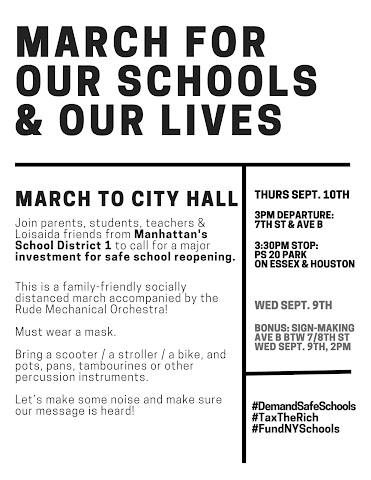 Updated 9/10: Given today's rain, the march has been postponed until next Thursday — Sept. 17.

Students, parents and teachers from District 1 will be gathering on Seventh Street and Avenue B tomorrow (Thursday) afternoon to rally for a safer return to school this fall

Here are details about the March for Our Schools and Our Lives via the EVG inbox...

Please join schools and community allies from across District 1 for a March for Our Schools and Our Lives, Thursday, Sept. 10, 3-5 p.m.

At a time when we should be investing new resources into our under-funded schools to get kids back to learning, parents back to work, and the economy up and running, school budgets across NY State have been decimated making educating our kids challenging for a normal year. The State’s funding cuts have made it all but impossible to open schools safely during the pandemic.

For that reason schools across District 1 have joined forces to demand better for our children, our teachers, our families and our entire community because our lives literally depend on it.

The march will end at City Hall.

Students are set to arrive for in-person classes on Sept. 21. Many public school teachers reported back to their schools yesterday in the first phase of the system reopening.
Posted by Grieve at 5:00 PM 6 comments: 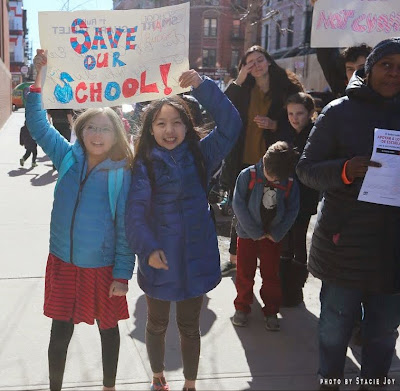 Between chants of “Hey hey, ho ho, Andrew Cuomo has got to go!” and “Save Our Schools,” parents, teachers and students marched and rallied at the Earth School (600 E. Sixth St., which also houses PS 64 and the Tompkins Square Middle School) yesterday afternoon to express their displeasure with the governor’s budgetary plans. 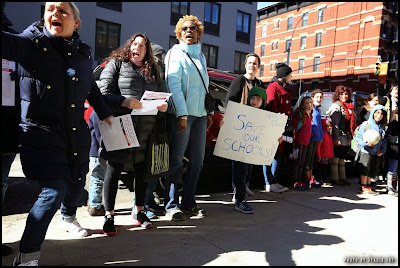 The proposed budget, which would be decided upon by April 1, would increase the focus on high-stakes standardized testing, and teachers feel that the state would be intruding on their classroom teaching methods. There would also be increased funding for charter schools, which traditionally do not educate the same number of higher-need students.

The parents I spoke to expressed fear that their kids’ public schools would continue to be underfunded and that programs that are much-needed e.g., arts, therapy, libraries would suffer. 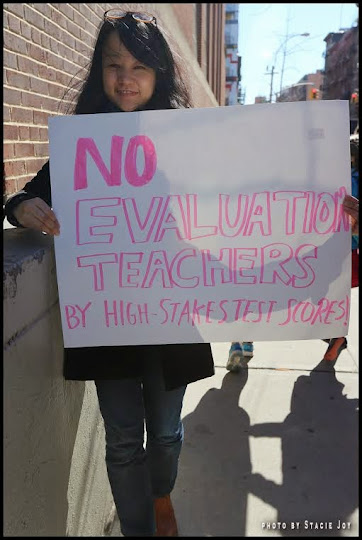 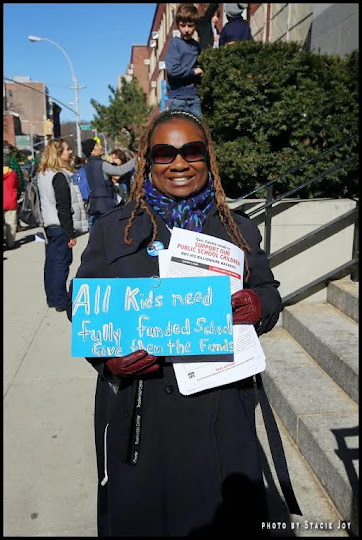 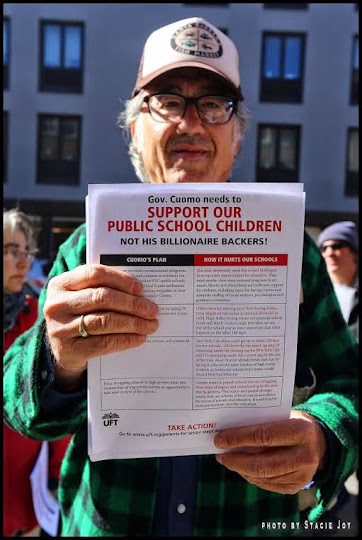 I spoke with Fatima Geidi and her son, Jamir Geidi (who is in third grade at the Earth School), about their experiences. Jamir had been at a charter school, Success Academy, for a few years and his mother said she was fed up with the lack of teaching and proper learning at the charter school.

She felt that her son was taught only what was necessary to take and pass standardized tests, not to think critically, or for himself. That he was, essentially, a test score and that the charter school was a test-prep center. And enrolled in public school her son (who has special-learning needs) now has social studies classes, something he wasn’t taught at charter school. She was particularly irritated that Cuomo failed his own standardized tests (the Bar) four times but mandates that public school funding should be cut on underperforming schools. 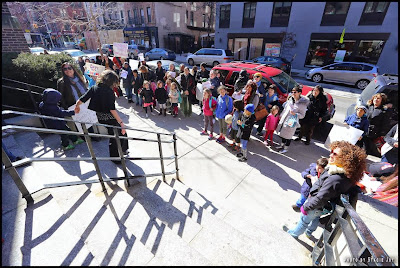 While I only attended the local Avenue B rally, it was part of a city- and statewide call to action. You can read more about it here.
Posted by Grieve at 12:11 PM 15 comments: